"Just do what I tell you": Why cops' tasing people is nothing to laugh at

People think videos of cops tasing people are funny. Here's why it's anything but harmless 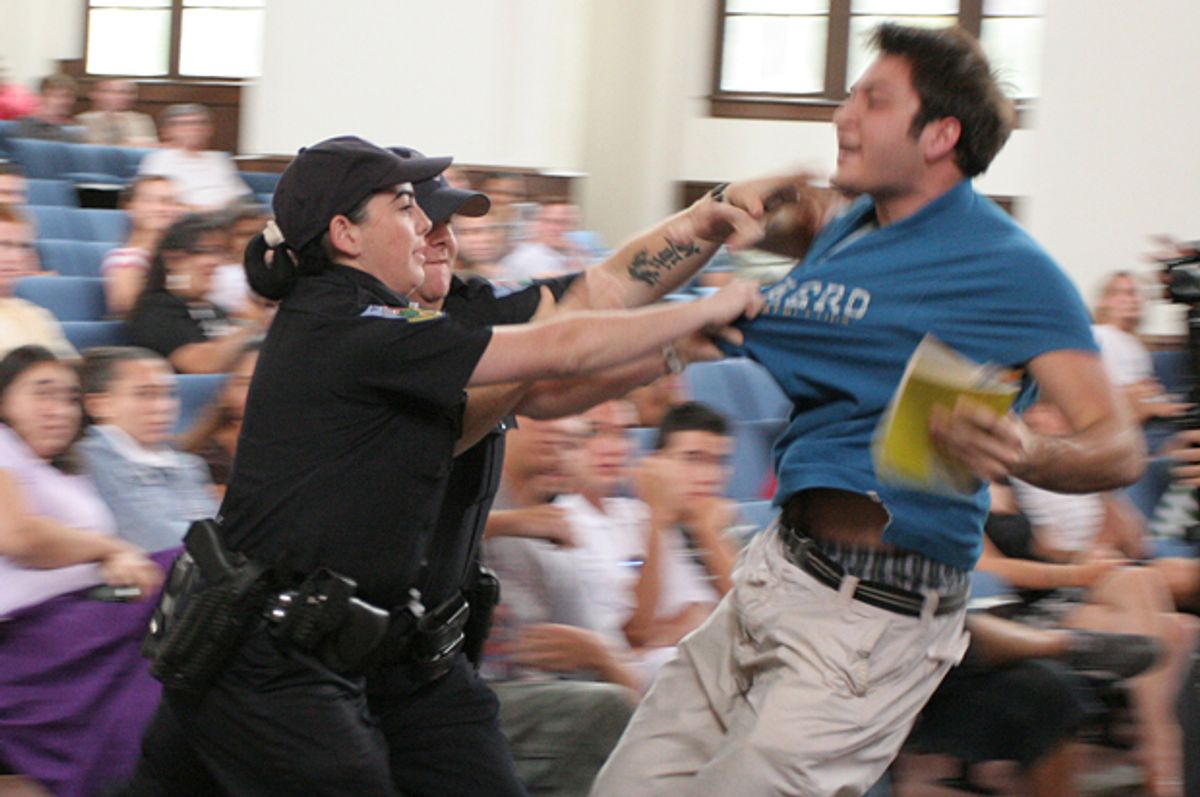 University of Florida student Andrew Meyer struggles with University Police as they try to remove him from a question and answer session with John Kerry, Sept. 17, 2007, in Gainesville, Fla. Meyer was Tasered and arrested. (AP/Andrew Stanfill)
--

Earlier this week, an LAPD police officer (and current professor of "Homeland Security," whatever that means) by the name of Sunil Dutta wrote an Op-Ed for the Washington Post in which he offered this piece of advice to members of the public when dealing with police officers:

[I]f you don’t want to get shot, tased, pepper-sprayed, struck with a baton or thrown to the ground, just do what I tell you. Don’t argue with me, don’t call me names, don’t tell me that I can’t stop you.

Later he suggested that one needn't submit to illegal searches or stops and said that citizens are allowed to refuse to consent to a search of your car or home if there's no warrant. He also says that an officer must let you go if there's no legal basis to stop and search you. How that's supposed to work is a little bit obscure. After all, that would easily be seen as arguing and telling him that he can't stop you -- and then he will feel free to tase you, pepper-spray you, shoot you or beat you.

And if you happen to be deaf or don't speak English or are in the middle of an epileptic seizure and physically cannot comply, well that's your problem.  You have been warned: If a policeman stops you, you can try to exercise your constitutional rights or even try to just be a human being but you are risking some serious physical pain if you fail to instantly comply with his orders, rights be damned.

The truth is that despite the recent horrifying examples of police brutality, in an average one-on-one interaction with police these days you are less likely to be shot, pepper-sprayed, hit with a baton or wrestled to the ground at an officer's whim than you used to be. But that's not because they've become better at policing. It's because they've been given a new weapon and carte blanche to use it without any repercussions. That would be the taser, of course, which police love for its ability to obtain instant compliance from citizens by shooting them full of enough electricity to flood them with intense pain, lose control of their bodies and instantly drop to the ground. If the person feels his rights were violated by an illegal stop or search, he can try to take it up later but there is almost no chance that anyone will care that the officer tortured him into compliance. After all, it doesn't leave marks (aside from the occasional bruise, broken tooth and scrape from hitting the ground very hard). It makes people laugh and laugh when they see the victims screaming in agony on YouTube videos. And it gets the job done. It's a very rare person who will continue to challenge an illegal stop after he's been shocked with electricity.

Here's just one example of thousands of videos showing the taser being used as a pain compliance weapon on someone who fails to follow instructions from a police officer.

You will note that the time from the traffic stop until the man was tasered was only 2 minutes and 40 seconds.

And if you happen to be an African-American, you can just be waving at the police in a friendly manner to get the treatment:

Evansville firefighter George Madison Jr. told the Evansville Courier & Press that he filed a formal complaint over the incident that happened on Tuesday. Madison, who also serves as a youth pastor at at Memorial Baptist Church, said that he was riding his bicycle on South Weinbach Avenue when he waved at several officers in a patrol car.

The next thing he knew, the officers had pulled him over.

“The officer jumped out and says, ‘What are you doing throwing your hands up at us?’” Madison recalled. “He is talking to me as he is coming toward me. I tried to explain, but I couldn’t get a word in edgewise.”

Madison said that he knew Evansville Police Chief Billy Bolin from community events, so he took out his cellphone to call him for help calming the situation. But the officer told him to put the phone down. And when he hesitated, the Taser came out.

“It was literally maybe inches from my face,” the father of four said. “I immediately threw my hands in the air. What he asked me to do I was more than willing to do. I said ‘Please don’t hurt me.’ The next thing I know I’m laying down the ground and they cuffed me.”

“I remember looking down the barrel of a Taser, because [the officer] was gritting his teeth and saying, ‘Don’t make me pull this trigger.’”

It's a very good thing he didn't try to "assert his rights" in that situation, isn't it?

And how interesting that just yesterday, similar assumptions were made about Missouri Highway Patrol Capt. Ron Johnson. Right-wingers on social media (and CNN!) accused the captain of "throwing gang signs" and said he was allegedly aligning himself with the Bloods in a picture posted on Twitter. It was actually the captain and a Kappa Alpha Psi brother "throwing" their fraternity greeting. It's just lucky he didn't make the mistake of doing it at some white cops who felt as if they were being dissed.

As for Mr. Dutta, he was a police officer during the worst of times at the LAPD Rampart scandals. He wasn't involved, but as an officer in the West Valley division, he had a lot to say about police culture after the scandal. He wrote:

The proven way to ensure that officers remain dedicated to their work is close supervision. The attitude of street cops largely reflects that of their superiors. If the officers believe their supervisors condone overtly aggressive policing and rude behavior, the citizens will face rude officers.

Giving police the unfettered authority to force compliance with tasers is a perfect example of overtly aggressive policing and rude behavior. It's anything but harmless, and not just because it can kill or injure. It's dangerous to Americans' understanding of what freedom and liberty are supposed to mean. In our Constitution we are explicitly given the right to demand that the authorities have good reason to detain us, search our property and arrest us. Torturing citizens for trying to exercise that right wasn't specifically contemplated in the Constitution, but it is pretty obvious that it would have been considered a big no-no. They outlawed cruel and unusual punishment for convicted criminals, after all. Doing it to innocent citizens in the streets and in their homes with no due process stands our entire system on its head.