Politicians, doing the "Ice Bucket Challenge" doesn't make up for the millions you cut from ALS research 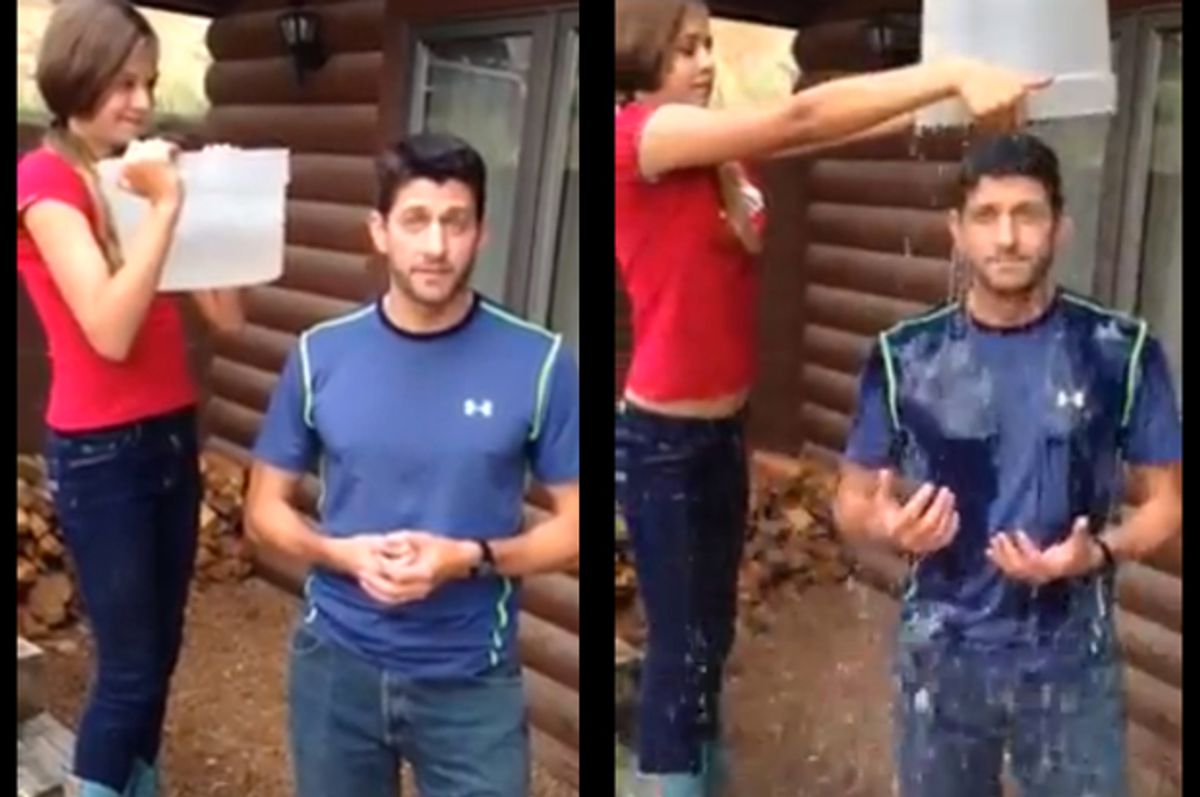 The "ALS Ice Bucket Challenge," which raises both funding and awareness for amyotrophic lateral sclerosis (colloquially known as Lou Gehrig's disease), has gained worldwide traction, and raised $31 million for the ALS Association, as of Wednesday.

Beyond the regular Joes filling Facebook news feeds with the challenge, many celebrities have dumped ice water on their heads -- as have quite a few politicians.

Yesterday, the Huffington Post, dare I say, doused politicians' ALS Ice Bucket Challenges with a heap of cold water, and revealed a tinge of irony in the philanthropic act.

"Some of the very lawmakers who have taken the Ice Bucket Challenge to raise awareness and money for ALS research voted for legislation that defunded ALS research," Sam Stein writes, opening his revealing piece.

Of course, this cannot be read as a simple up or down vote on ALS research. But it does present a moment to dissect the impact of certain bills and political ideology.

The piece of legislation that Stein brings up is the Budget Control Act of 2011. The name of this bill may not jog your memory, but it ended a very intensely fought political battle. The Budget Control Act of 2011 ended a debt-ceiling standoff between House Republicans and the the Obama White House. House Republicans did not want to raise the debt ceiling without deficit reduction, and if Congress did not vote to raise the debt ceiling, the U.S. would have defaulted.

According to Congressional Research Service:

"The BCA authorized increases in the debt limit of at least $2.1 trillion dollars (and up to $2.4 trillion under certain conditions), subject to a disapproval process that would likely require securing the support of two-thirds of each chamber to prevent a debt limit increase. It established caps on the amount of money that could be spent through the annual appropriations process for the next 10 years, which the Congressional Budget Office (CBO) estimates will reduce federal spending by $917 billion. The BCA also created a Joint Select Committee on Deficit Reduction that is instructed to develop a bill to reduce the federal deficit by at least another $1.5 trillion over the 10 year period ending in FY2021.

The BCA, as the bill is abbreviated, mandated immediate cuts, and then across-the-board cuts known as sequestration, which went into effect in January of 2013.

The National Institutes of Health was one of those agencies affected by the roughly 5 percent cuts. An estimated $1.55 billion was cut from its programs, according to the Huffington Post. One of NIH's arms is the National Institute of Neurological Disorders and Stroke. NINDS's budget lost $92 million in funding from Fiscal Year 2012 to Fiscal Year 2013 -- specifically, ALS research went from $44 million to $39 million.

Some of this funding, Huffington Post notes, has been restored. The budget for ALS in FY 2014 is $40 million, and NINDS went from $1.53 billion to $1.587 billion, a 3.6 percent increase. These two current budgets, however, are still short of pre-sequestration levels of funding.

"These contradictory decisions don't necessarily make the lawmakers hypocrites," Sam Stein writes. "Many of them reluctantly cast that vote, and others are fine with funding ALS research so long as the funding comes from private sources and not federal taxes."

What this does point out is a lack of awareness of what large, broad cuts in spending really affect. Politicians control the purse-strings for federal medical (and other) research, and the budget has taken quite a few hits with sequestration. Yet, they are willing to privately donate, and publicly show their support by taking part in this viral philanthropy trend -- dumping ice on their heads.

The "ALS Ice Bucket Challenge" has raised far more than the $4 million gap between pre- and post-sequestration funds. However, this money will not go to the National Institutes of Health.