Having struggled with depression and suicidal thoughts myself, I found it hard to stomach the coverage of Williams 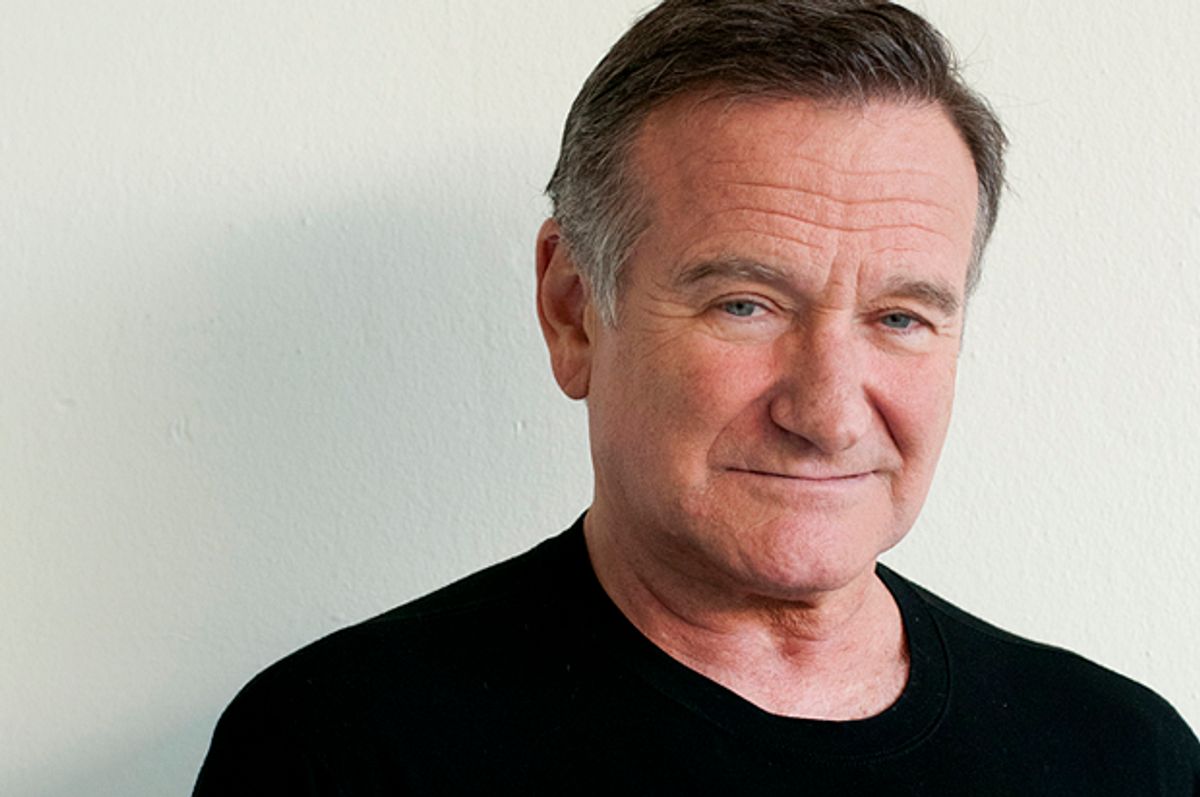 It’s been over a week since Robin Williams killed himself. I loved Mork when I was a kid, and Williams (as Mr. Keating) was one of my idols as a young teacher. I am sorry to hear of his passing, but I wouldn’t say I am grieving. After all, I didn’t know him. But as someone who struggles with depression, I’ve found that the media blitz around his suicide has messed me up more than I could have imagined

I had my first thoughts about suicide around the eighth grade. I was bullied at summer camp, which certainly didn’t help. Once you contemplate suicide, it’s in there forever, a rattling in the attic, a whisper in the ear. The window in an airless room. I survived decades without help, and I’m not entirely sure how.

The songwriter John Prine sang, “Two men were standing upon a bridge/ one jumped and screamed ‘You lose!’” Johnny Cash wrote about driving out to some caves, crawling inside one, and waiting there to die. At my worst – and that was hanging out on the Panther Hollow Bridge in Pittsburgh, looking down to the shallow, filthy pond hundreds of feet below -- I berated myself for my cowardice. Come on, pussy – up and over and you don’t even have to walk home.

It took a few days to figure out where the creeping dread was coming from, like a rotten potato behind the fridge. Any kind of habitual self-destruction cuts a deep rut in the brain, and I felt the wheels jerk between its walls before I knew what was going on.

There is absolutely nothing wrong with my life – I’m not Robin Williams, but I have a book deal and a good job. I’m happily married and live at the beach. That doesn’t matter. While some people might be able to process a news cycle full of suicide, racial violence, and apocalyptic climate change with analytical distance, I’ve felt personally overwhelmed with hopelessness and shame. And most of all, the constant, graphic reports about Robin Williams’ death have haunted me.

For about three days, I’d been exposed to hundreds of news stories, social media posts, eulogies, obituaries, memes, appeals for mental health care, hotlines, media insensitivity and testimonials. Suicide, suicide, suicide, suicide, suicide, like a crossword puzzle with dozens of clues and only one answer, repeated over and over. Until the wheel spins and digs.

Shrinks always ask if I have ever made an “attempt,” meaning something that led to hospitalization. I never have. That would have put me in a position where I couldn’t do it if I wanted to. There was a time when killing myself seemed the only way I could imagine having control of my life, my mind, myself.

In college I bought a rifle, thinking I would take up hunting with some of the guys. I tried out the steel barrel, to see how it felt under my chin. I got rid of it.

Now, I’m not in any danger. I’ve responded well to medication and therapy, and eventually Robin Williams and his suffering and his tragic final choice will cycle out of the news, and I’ll stop feeling crushing doom every time I read the goddamned word. My suicidal ideations will hang in the doorway, but they won’t get in. I’ve trained like an athlete to fill in that rut. I laugh and say, “I hate my brain!” to avoid thinking “I hate myself.” But our media’s relentless fixation on Williams’ suicide -- not just on the fact that it happened, but on hashing out the gruesome specifics -- has felt deeply inappropriate and misguided to me.

Personally, the only way I’ve ever been able to process death is through humor. My mother scolded me for cracking jokes at my grandmother's funeral when I was 11. When my friend Aimee was in the hospital to have her gall bladder removed, I drew her a diagram of her intestines populated by spermatozoa, chicken wings and worms.

And in this situation, as hard as it may be, perhaps we should all be cracking jokes -- memorializing Williams in the way he lived instead of ruthlessly publicizing the terrible way he died. After all, Robin Williams ran from the sounds of mourning; he wanted, profoundly, to hear laughter.

Michael Gerhard Martin holds an MFA from the University of Pittsburgh and teaches writing for Babson College and the Johns Hopkins University Center for Talented Youth. His first book, "Easiest If I Had a Gun," is coming in  November from Braddock Avenue Books.