BBQ, urinals and part 1 of a tour diary by the authors of "The Great Glass Sea" and "In The Course of Human Events" 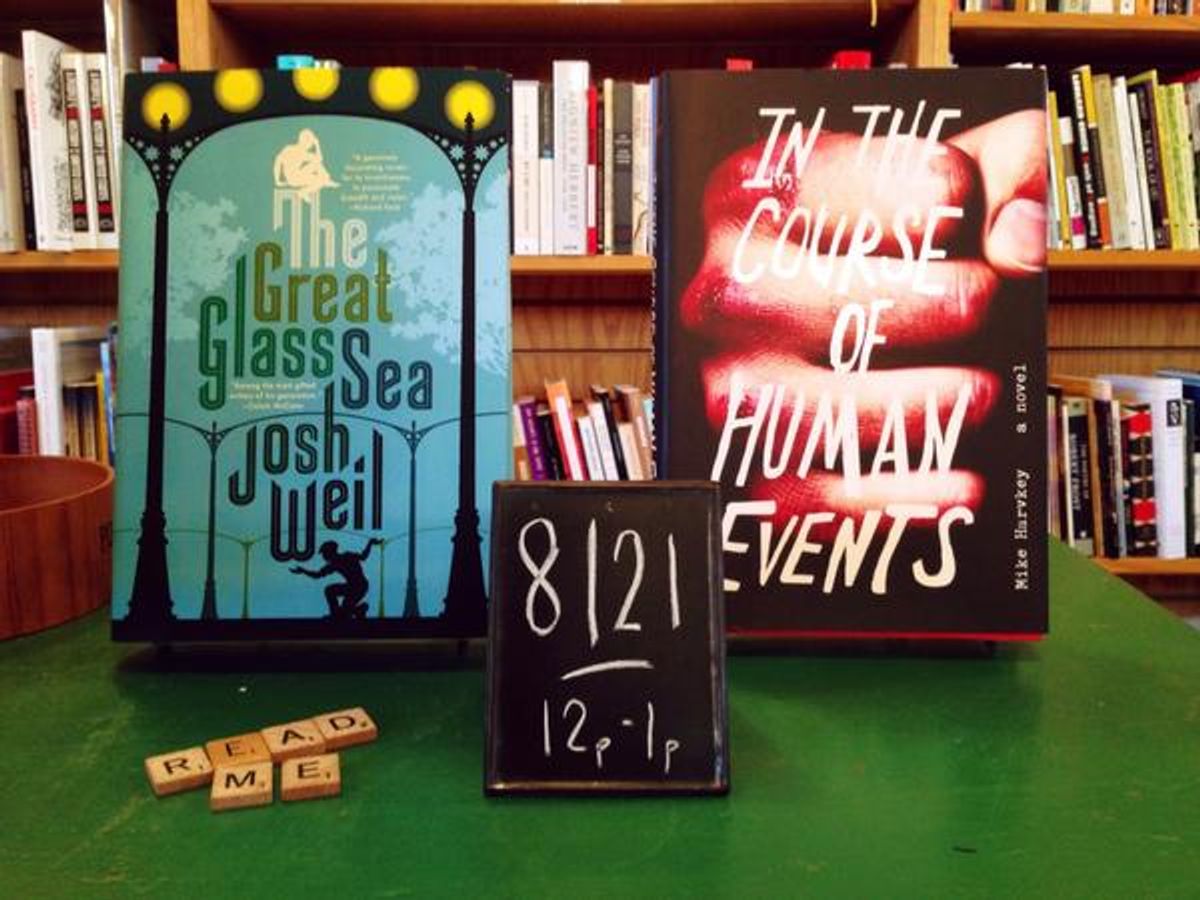 Our books on display at the Literati Bookshop in Ann Arbor, Michigan
--

Our first bathroom break came 300 miles in, still shy of Buffalo (the sign said “An All American City”): one of those manufactured rest stops with an, um, Canadian Tim Horton’s. Entering the cavernous bathroom, one of us asked, “We gonna pee next to each other?” and we both made straight for opposite ends of the urinal line. Ten empty toilets between us.

One week before September 11 we met as creative writing students in Columbia University’s MFA program. Over the next decade we became best buds and first readers for just about everything we wrote. A few months back, our first novels hit shelves just weeks apart. Now, both of us staring down the double barrel of middle age — Josh expecting his first baby and Mike returning to real life after a year of backpacking around the globe — we decided to push against the busy lives that put a whole country between us, coming together on a classic adventure: We’re crossing the entire country, reading together in bookstores from Kalamazoo to Laramie, hiking America’s mountains, swimming America’s rivers and getting eaten alive by America’s bedbugs in cheap roadside motels.

We’re doing this because we’re buds and we’re starting new books. We’ve always talked our ideas through with each other; it’s always helped. Through these conversations, we’ve grown as writers together. At Columbia, we did an independent study — just the two of us taught by the brilliant Christine Schutt — that broke open our basic understanding of narrative. Later, over beers, Mike helped Josh figure out how to turn his rough draft into the novel "The Great Glass Sea" became. And Josh read several drafts of "In the Course of Human Events," helping Mike fully realize his main character’s motivations. In Mike’s book, Clyde Twitty, a young Midwestern man, has all but given up hope for the future. Then he meets Jay Smalls, a charismatic and seductive martial artist whose brutal instruction includes a crash course in anti-government extremism. Josh’s book had been missing a vital part of the narrative that would underpin its character arc. After talking with Mike, the story came to the fore: two brothers trying to hold onto their love for each other as the pressures of adult life and contemporary society — an alternate Russia where oligarchs rule and satellites have rid the world of night — threaten to drive them apart.

Now, with those books in stores and the blank page facing us, we wanted to talk fiction for a few thousand miles, to jump-start our ideas one more time. Even though "The Great Glass Sea" and "In the Course of Human Events" are such different novels, we knew they were rooted in shared concerns about the pressures of capitalism, and the power dynamic between men. But maybe that’s just because we’re listening to Andre Dubus III’s "Townie" on the drive. It’s a great book about growing up in a world of brutal poverty and finding a way to fight back and ultimately survive. On a sentence level, one of the most striking successes is the way that Dubus uses the sense of smell to make the story visceral. It’s the sense that writers tend to use least — and a good lesson for us, both visually driven, right at the start of our trip. There’s something about smell that drops you straight into a scene. Sometimes Dubus goes for the most immediate connection — the smell of “wine and piss” — but other scents are so specific that they authenticate the world of the book: the “sweet lead paint” scent on a clapboard house. But maybe we’re just thinking about that because we’ve been in a car together already — and we’re only on day one — for 12 hours, and it’s starting to smell like cold corn on the cob, stale burnt coffee, dusty paper, cherry tomatoes picked by Josh’s mom and last night’s roadside BBQ still under our fingernails.

In addition to just wanting to spend a lot of time together, we had some questions we hoped this trip might answer, questions we hope to chew over here, in near-daily posts: What does the Great American Road trip look like in 2014? Is it true that the book tour is as good as dead, a waste of time? Is this about selling books or something less tangible?  What will we see as we cut a line through the center of a recession-slammed America? Can we sit in a car together for 13,000 minutes and come out better buddies, or will one of us, probably somewhere in Utah, turn to the other and mutter, “I really really wish I could quit you”?

We don’t have the answers yet, but we do know this: By midnight, outside of Cleveland, when we stumbled into our last bathroom break of the day, we no longer needed a wall of urinals between us; we stood right next to each other, side by side. In the last minutes of our first day, we stared down at matching urinal cakes, both inscribed by the same hand, 8/16. Standing there, the calendar flipped a page to Aug. 21. For being covered with five straight days of male urine, we thought those cakes were in pretty good shape.