Where did all the male comedy TV stars go?

This year, there are remarkably few credible nominees--Ricky Gervais?--for a category that once felt overstuffed 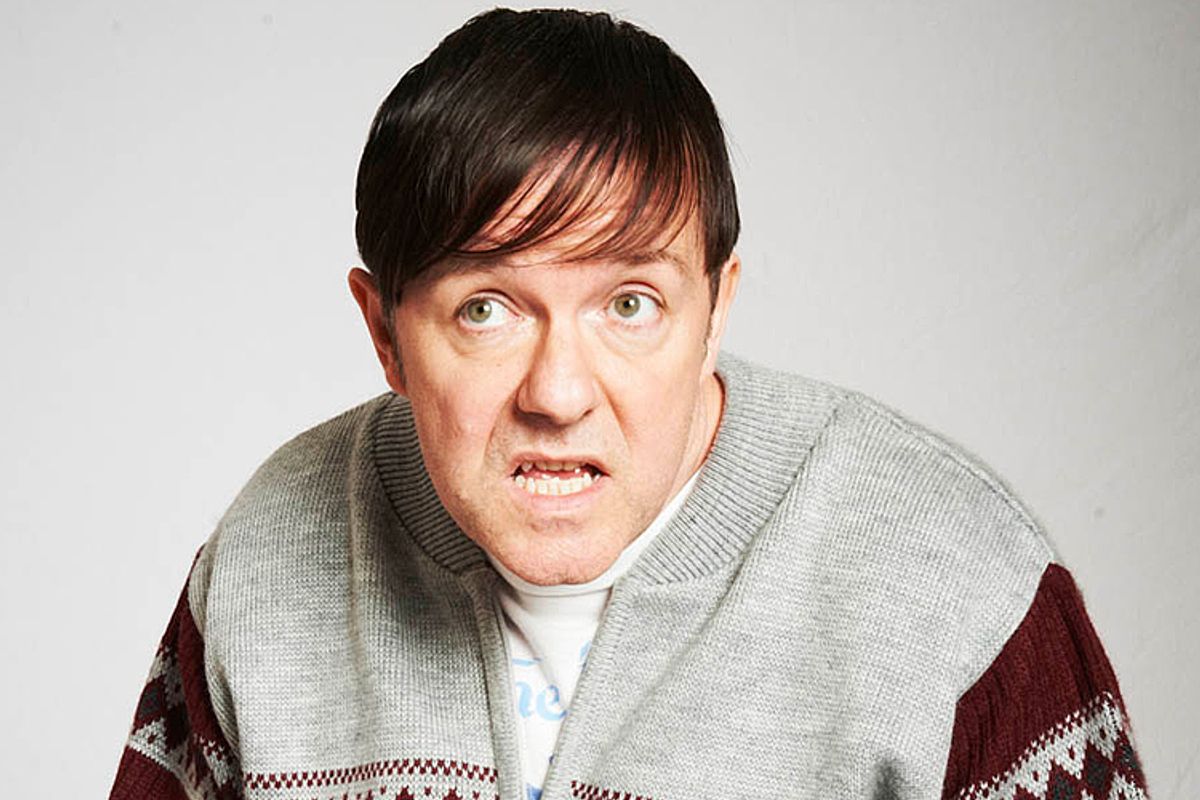 The best actor in a comedy category at the Emmys has honored some of the great TV icons: Alan Alda in "M*A*S*H," Carroll O'Connor in "All in the Family," Kelsey Grammer in "Frasier," Alec Baldwin in "30 Rock." And this year, it could potentially go to the little-liked star of an online series about a simple-minded nursing home employee. How did TV's biggest prize for funny men go from the Ricky Gervais of "Extras" to the Ricky Gervais of "Derek"?

Gervais's "Derek" nomination was perhaps the biggest stunner of nomination morning. The series, which streams stateside on Netflix, has come in for serious criticism. (New York magazine's Matt Zoller Seitz said parts of the show "veer toward 'empathy' rather than empathy, as if the main goal is to convince people that the storytellers are good and kind people," while the A.V. Club's Phil Dyess-Nugent said the show "has all the creative ambition" of an online critter video.) More urgently, Gervais has matured -- or the opposite -- into one of the least likable figures in contemporary entertainment. Even before "Derek," in which Gervais' title character has some unnamed mental deficiency, Gervais has made a habit of punching down -- his flatly mean-spirited Golden Globes jokes were one thing, but his nasty "mong" jokes are quite another. In general, a person's persona doesn't necessarily mean they should be ineligible for awards consideration, but "Derek" is queasily of a piece with the joy Gervais takes in finding fun in disability. And with its low profile, it would've been easy to ignore at the Emmys.

Except ... would it? There are remarkably few credible nominees for a category that a decade ago felt overstuffed. To fill out a field of six, the Emmys tapped every nominee from last year who was still eligible -- that'd be "The Big Bang Theory's" Jim Parsons (already a three-time winner), "Louie's" Louis C.K., "Episodes'" Matt LeBlanc, and "House of Lies'" Don Cheadle (he's on TV?!). That's only four, so William H. Macy of "Shameless" joined Gervais among the newbies, despite the show being barely a comedy at all -- until this year, the Emmys counted it as a drama.

This is thin gruel, and it's the way things have been for years: Both LeBlanc and Cheadle are on their third nominations for their respective Showtime series. It's not that they or their shows are bad; it's that honoring them so generously, as well as tossing a nomination Macy's way, feels a bit strange, given how little heat Showtime's comedy lineup has in the culture. But it's hard to think of who else would feel better-suited to academy recognition. Andy Samberg is very funny, if doing little in the way of heavy lifting, in "Brooklyn Nine-Nine," a show the academy clearly thinks needs more time to cook; Jon Cryer of "Two and a Half Men" won this category recently, though the show's aging rapidly; Michael J. Fox's eponymous sitcom was a ratings bomb, but people really love him. None of these absences feel, exactly, like "snubs."  Maybe in picking famous people -- Cheadle, LeBlanc, Gervais -- the Emmy voters were doing their best.

By contrast, the best actress in a comedy field this year honors the stars of four innovative and much-loved shows -- "Veep," "Girls," "Parks and Recreation" and "Orange Is the New Black" -- as well as TV icon Edie Falco of "Nurse Jackie" and all-around superstar Melissa McCarthy of "Mike & Molly." And there's been, for years, a deep bench: The field is this crowded even after last year's nominees Tina Fey and Laura Dern became ineligible.

It'd seem, using the deeply unscientific method of "which category's nominees feel less random," that the heat in TV comedy is with women. Perhaps it's a consequence of the much-vaunted "antihero" boom, whereby TV drama has, more and more, become about the darkness in the hearts of deeply serious men. Men on TV are grave and beset with crises while women get to have the fun. If a consequence of more and more Julia Louis-Dreyfuses and Lena Dunhams getting to be at the center of stories is that there's less room for Emmy-worthy men, that's a small price to pay.