The rules are important at Burning Man. But being rich means you get to do what you want, just like anywhere else 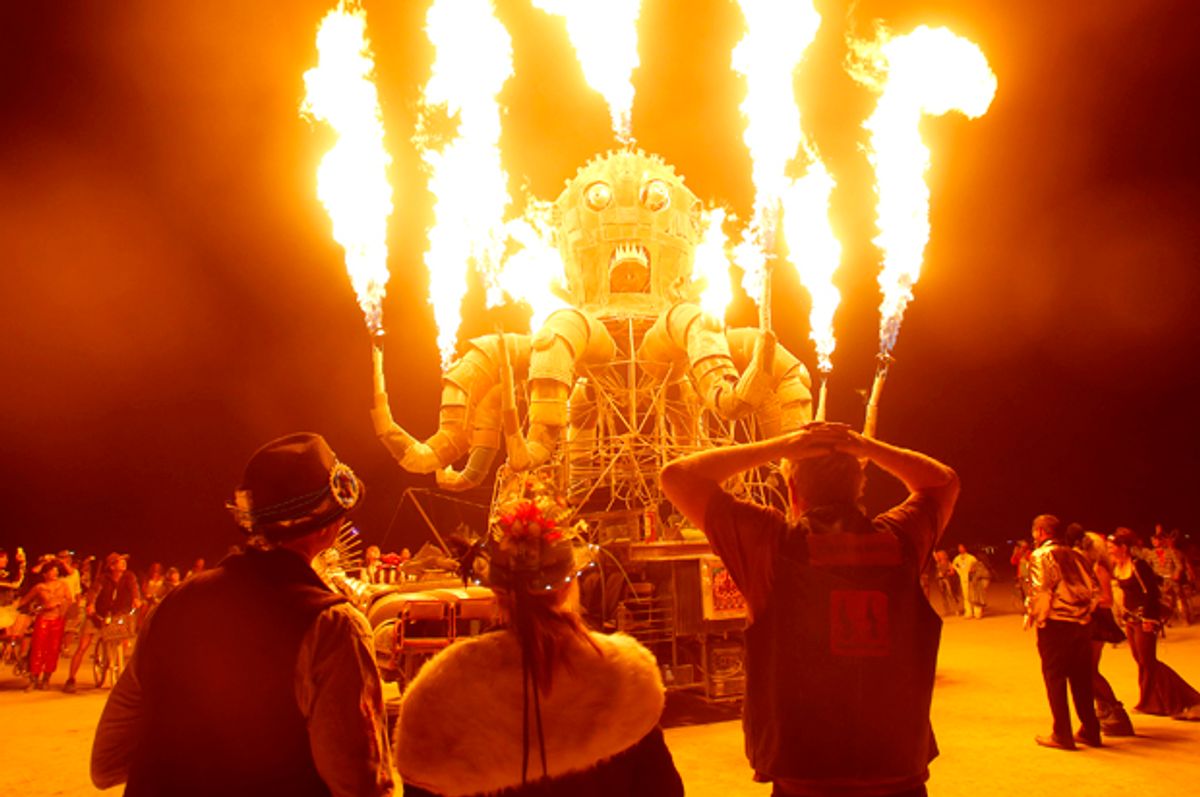 Ferenstein, a regular attendee at the Nevada desert counterculture festival so beloved by Northern California's tech-hipsters, is defending Burning Man from critics like the New York Times' Nick Bilton, who have noted that in recent years, rich attendees have been setting up their own luxury camps within the confines of Black Rock City. Ferenstein makes some good points explaining why tech billionaires love Burning Man, but it's still difficult to square his point on "burning man culture" with the details reported by Bilton.

“We used to have R.V.s and precooked meals,” said a man who attends Burning Man with a group of Silicon Valley entrepreneurs... “Now, we have the craziest chefs in the world and people who build yurts for us that have beds and air-conditioning.” He added with a sense of amazement, “Yes, air-conditioning in the middle of the desert!”

His camp includes about 100 people from the Valley and Hollywood start-ups, as well as several venture capital firms. And while dues for most non-tech camps run about $300 a person, he said his camp’s fees this year were $25,000 a person. A few people, mostly female models flown in from New York, get to go free, but when all is told, the weekend accommodations will collectively cost the partygoers over $2 million.

Ferenstein writes that the tech execs have basically the same experience as everyone else. But he appears to be tone-deaf to the enormous offense of labeling paid employees "Sherpas" and doesn't bother to mention the female models flown in from New York. That's not the gift economy, and it's not the sharing economy. And it's surely not something that anyone even imagined possible when tripping around a very big bonfire on Baker Beach in the early '90s.

Ferenstein also wanders into a self-combusting contradiction, of the sort that would look pretty good exploding  in the desert night. Burning Man, he writes, "is an experiment in what a city would look like if it were architected for wild creativity and innovation.... At Burning Man, sharing is the economy. It's rather appealing to the Silicon Valley elite to see an entire city function on an economic idea that is at the heart of the knowledge economy. It's an important glimpse of why the founders are so optimistic that a loosely regulated field of tech startups can outweigh the potential downsides of unregulated sharing."

But Burning Man is intensely regulated. It's got its own police force. Gun control is absolute. Attendance is limited to a set number of people who can afford the not-cheap tickets. The very layout of Black Rock City is a paean to planning and organization. Central control is as much the essence of Burning Man as is hedonism and fire.

We can argue about the proper extent of regulation. Is Burning Man more like Houston, which scoffs at zoning restrictions, or San Francisco, where plastic bags are outlawed? (The rules on trash at Burning Man might come off as pretty extreme to your typical happy-go-lucky free market polluter, after all.) But to use Burning Man as a model for what tech billionaires want for a greater society is to actually argue that rules are extremely important, and anarchy is a failure!

The key point made by Nick Bilton is that the very existence of a camp inside Burning Man where tickets cost $25,000 and female companionship is imported is a demonstration that Burning Man, far from being an alternative to society, is business as usual.