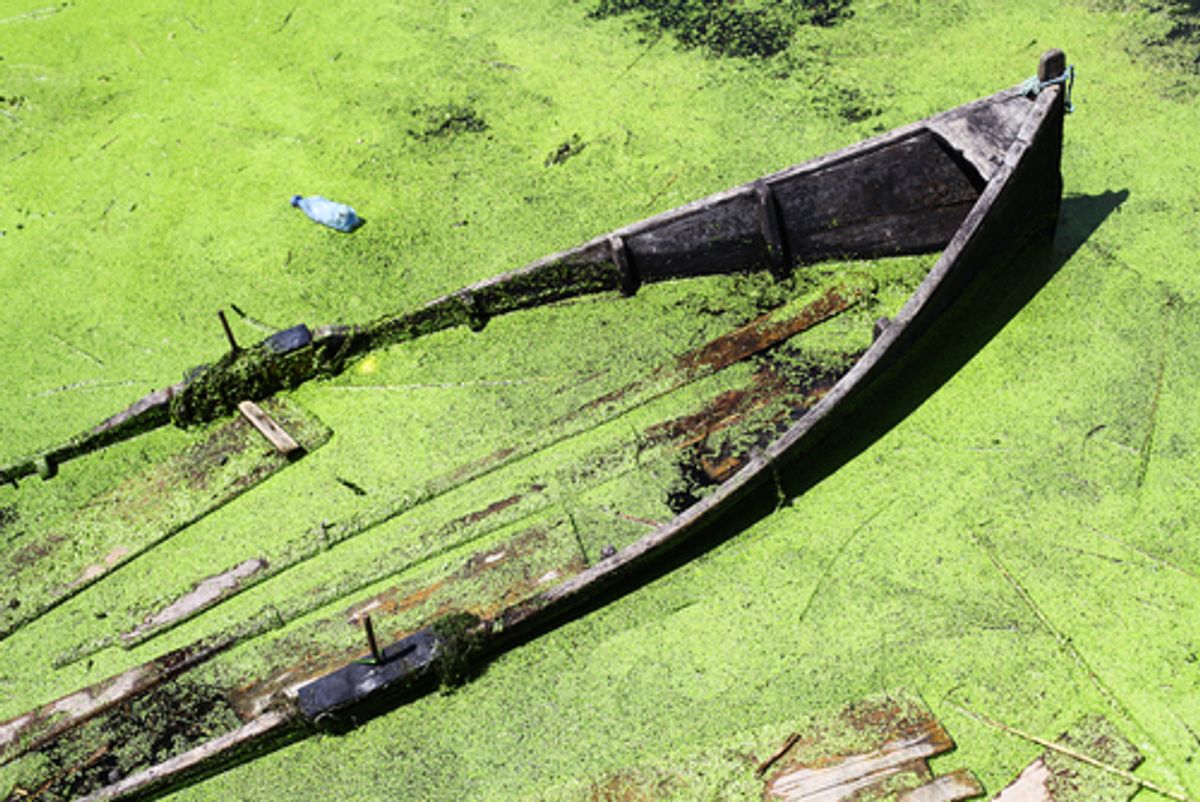 Algae have a lot to offer. They feed the world’s marine life, thicken ice cream, and may provide the key to solving the world’s energy crisis. Algae hold your California roll together. But there’s an algal underworld, too, inhabited by murderous cyanobacteria and backstabbing Prymnesium. Many of these cloak-and-dagger species lurk in our streams and along our shorelines—as 500,000 Ohioans learned the hard way over the weekend, when a Lake Erie algal bloom left them without drinking water for nearly two days.

Humans have a long history of conflict with algae—and current agricultural practices and climate change are making things worse. One of the earliest recorded instances of algae attacking North Americans occurred in the early 1790s off the coast of Washington State, when British naval officer George Vancouver noticed that several of his men were having trouble breathing. Some sailors went numb and babbled incoherently before suffocating. They had ingested saxitoxin (probably by eating bad clams or mussels), a potent poison produced by an algal dinoflagellate belonging to the genus Alexandrium. More than 200 years later, we still have no antidote for saxitoxin, and paralytic shellfish poisoning kills about 9 percent of those who come down with it.

Death by algae is rare—history’s most deadly algal bloom killed 88 Brazilians in 1988—but it is often dramatic. People who consume too much microcystin, the cyanobacteria product that contaminated Toledo’s water supply, can experience staggering and derangement, along with the more common gastrointestinal distress. The algae Gymnodinium breve produces a toxin that, when ingested, generates alternating hot and cold sensations. Domoic acid, the waste product of several different algae species (and the demise of many seabirds), causes memory loss and disorientation. The aptly named scaritoxin can trigger vertigo.

Different regions of the United States have their own local blends of problematic algae, which means there could be more Toledos in our future. (Climate Progress has a nice rundown of some of the most algae-threatened cities, and researchers this week said that Florida could be facing its largest red tide bloom in nearly a decade.) Alexandrium tamarense, the cause of paralytic shellfish poisoning, is most common in the Pacific and the northeastern United States. Pfiesteria piscicda populates the Mid-Atlantic, while Gymnodinium breve is found in the Southeast.Gamberdiscus toxicus, which concentrates on its way up the food chain until humans consume it in large fish, is a special risk in warm waters.

Researchers don’t yet have a unifying theory to explain why algae produce toxins, but humans are collateral damage. We are newcomers compared to species like cyanobacteria, which appeared on Earth billions of years before us. (“Algae created the oxygen we now breathe,” points out phycologist Robert Sheath from California State University San Marcos). The most popular hypothesis is that algae evolved toxins to ward off grazers up the food chain. There is laboratory evidence to support this idea: Phytoplankton that feed on alga seem to avoid the toxic varieties, and a handful of algal species deploy their poisons as weapons. Karlodinium veneficum, for example, uses its toxin to stun members of other algal species before swallowing them whole.

In a community of creatures that poison their own, it’s not surprising that a few algae try to game the system. William Driscoll, a postdoc at the University of Minnesota, has shown that individuals living within golden algae colonies occasionallystop producing the toxin in order to save energy. Those individuals get a free ride off the efforts of their neighbors, which continue working hard to deter predators or stun prey. Why would so many algae deplete their own energy stores for the benefits of others? It may be an example of self-sacrifice and cooperation, which seems to occur even among some of the planet’s simplest creatures. Humans could learn a thing or two from algae.

Many scientists believe that the recent proliferation of harmful algal blooms—including those involving toxin-producing species, like the ones in Lake Erie—is related to climate change. Increased rainfall causes greater runoff from farmland and more frequent overflow of water treatment facilities. Those overflows feed phosphorous and nitrogen into waterways, which allow algae to grow to unhealthy levels. If we don’t want to face more water crises in the future, perhaps it’s time for humans to make like golden algae and work collectively toward our own survival.