Why can't the media talk about the Ivy League without freaking out? 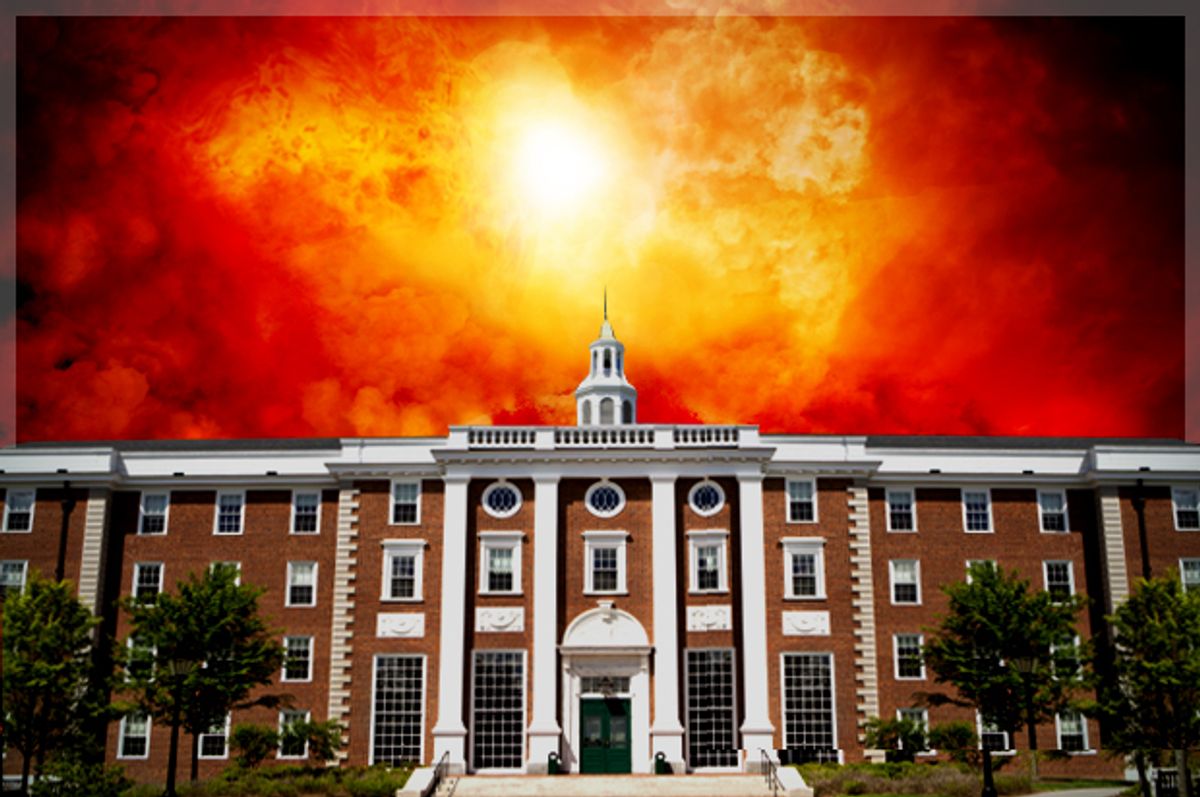 Is it even possible to talk about the Ivy League rationally these days? If you're a product of it, you partake of its prestige even when criticizing it and, more often than not, end up endorsing its importance. And if you're not Ivy, then you're well aware that whatever you have to say about those eight institutions will seem tinged with the resentment of the excluded. The worth of an Ivy League education is a theme that drives many fine minds to gibbering and evasion, and nowhere has this syndrome been more evident than in the response to William Deresiewicz' new book, "Excellent Sheep: The Miseducation of the American Elite and the Way to a Meaningful Life."

Deresiewicz went to Columbia (undergraduate and graduate) and was an associate professor at Yale, where he did some time on the admissions committee. "Excellent Sheep" argues, often eloquently, that "elite education" (the Ivies as well as Stanford and other private colleges like Williams) and the whole feeder system that trains upper-middle-class kids to succeed in it -- "the ever-growing industry of tutors and consultants, test-prep courses and enrichment programs" -- is broken. It produces, he insists, "students who are smart and talented and driven, yes, but also anxious, timid and lost, with little intellectual curiosity and a stunted sense of purpose: trapped in a bubble of privilege, heading meekly in the same direction, great at what they're doing but with no idea why they're doing it."

Deresiewicz first aired these opinions in an essay for the American Scholar in 2008, but he also recently published a piece titled "Don't Send Your Kid to the Ivy League" in the New Republic to herald the release of his book-length treatment of the subject. Each iteration has produced a spate of stormy controversy, much of it as revealing as a Rorschach blot. For Maureen O'Connor (Princeton), writing in New York magazine, for example, the most egregious aspect of Deresiewicz's book is its author's flaunted "privilege."

I'm all for encouraging the obliviously advantaged to check their privilege when they're telling the less lucky how to live or when they're acting as if their own happy circumstances are standard issue. But calling "privilege" on someone can also be a cheap rhetorical tool that asserts moral superiority without really earning it. Deresiewicz knows he's privileged; privilege is the very subject of his book, which aims to describe the soul-deadening effect of the technocratic "achievement" race and the thoughtless quest for name-brand credentials. O'Connor points out that there's a long history of a "paradoxical social practice" she calls "elite populism," in which commentators bemoan the shortcomings of the fancy world they inhabit, or once inhabited. But so what? Who else is better suited to describe the inner lives of Ivy Leaguers if not a writer intimately acquainted with the Ivy League? Certainly not someone like, say, me -- the product of a public university in California and at least a decade of bohemian lollygagging around San Francisco. When I'm curious about the culture of Harvard, I want to hear from someone who's spent some time at Harvard.

And I am curious about how Ivy Leaguers think, because it matters. These people run the nation. As Deresiewicz points out, every president since Reagan went to Harvard or Yale at some point. The Ivy League Deresiewicz describes is like a greased channel, smoothly funneling junior masters of the universe into cushy if demanding jobs in finance, law and consulting. Their actions and outlook affect all of us. In this light, the insinuation that a critical, self-reflective look at the mentality fostered by elite universities is somehow trivial because it concerns the privileged is, frankly, bizarre. But that's fairly typical of the convoluted, shamefaced, defensive way we talk about class in America: An Ivy Leaguer mocking another Ivy Leaguer because his denunciation of the Ivy League is just so Ivy League.

No, it's not easy getting a bead on how these people's minds work! And for that reason alone, Deresiewicz's book has value. Yet one of the solipsisms of "Excellent Sheep" is that its author assumes his readers are all Ivy Leaguers, too -- either alumni, current students or aspirants. His 2008 essay, he explains, "went viral," and as a result he apparently has spent much of the intervening years corresponding with Ivy Leaguers as well as giving talks at colleges about what education is really for. This has fostered an annoying propensity to catchphrases and aphorisms: "A real education sends you into the world bearing questions, not resumes"; "You may not be interested in politics, but politics is interested in you"; "The point is not to have a high IQ. The point is to use it." A little bit of this goes a long way in a written text (as opposed to a talk), and even when you basically agree with the sentiments, it starts to sound pat.

The middle section of "Excellent Sheep" is given over to exhorting top students not to reflexively major in economics and aim for Wall Street careers just because everyone they know -- especially their helicopter parents -- expects them to. They should explore, take chances, consider majors in the humanities, break up their habitual ways of thought, figure out who they really are, and so on, all decent advice, but hardly revelatory. I've enjoyed Deresiewicz's literary criticism, but I don't need him to explain the value of art and perils of status-seeking to me. Too many passages begin with the sort of cranky refrain best confined to Andy Rooney spots and Facebook comments. Pro tip: Whenever you find yourself beginning a sentence with "Whatever happened to..." just stop right there.

If some of "Excellent Sheep" feels padded or unduly shaped by the public-speaking element of Deresiewicz's work, other parts are self-contradictory. (He urges students to pursue their quirkier dreams, such as becoming an organic farmer, then scolds them for thinking running an organic farm constitutes meaningful social engagement.) Yet Deresiewicz also presents plenty of evidence, both statistical and anecdotal, that Ivy League students often feel lost or trapped on a treadmill of obligatory and fundamentally hollow man-in-the-grey-flannel-suit-style achievement. "I am just a machine with no life at this place ... I am a robot just going page by page, doing the work," said one. "I hate all my activities, I hate all my classes, I hated everything I did in high school, I expect to hate my job, and this is just how it's going to be for the rest of my life," said another.

Apart from the basic decency of not wishing such a condition on any human being, regardless of their upbringing, this is really not the way you want the people running banks and practicing law to feel about their lives and work. Just as it's unreasonable to expect prep-school-level academic skills from young people emerging from underfunded public school districts, it's dumb to expect integrity from kids who have been raised to chase test scores, brass-ring credentials and other superficial symbols of "success" to the exclusion of all else. In this respect, "Excellent Sheep" resembles "The Feminine Mystique" for the meritocracy -- less focused and innovative than Friedan's epochal 1963 book, perhaps, and definitely not speaking for everyone, but valuable all the same for identifying the worm at the heart of a condition we've all been led to believe is ideal.

Certainly, it doesn't seem to merit the spitting, sarcastic rage of, say, the review "Excellent Sheep" got from Carlos Lozada (Notre Dame, Princeton) in the Washington Post. Lozada veers bewilderingly from defending Ivy League students against Deresiewicz's claims that they don't "ask themselves the big questions" and protesting the author's characterization of "business and professional work" as rank careerism, to deriding the "profoundly elitist" idea of worrying about the merits of an Ivy League education in the first place. "A mind is indeed a terrible thing to waste," Lozada writes witheringly, "especially if it belongs to a sophomore at Yale." But, you know what? It really is. If the most expensive and esteemed education that our nation has to offer results in a wasted mind and a stunted spirit, then "terrible" is a pretty apt word for it.

According to Joshua Rothman (Harvard) of the New Yorker, however, all this fuss is sadly misguided. In a long, grand, hand-wave of a post to the magazine's website, Rothman explains that the overworked anomie Deresiewicz describes is not peculiar to Ivy League students but is in fact how all American adults feel these days. What Deresiewicz perceives as caused by an ever-escalating competition to rack up the most AP tests, extracurricular activities and A-pluses is really just your basic "very old and very new" response to modernity, to "the looming presence of the arrhythmic, unreassuring modern world, which seems always to be speeding things up in a senseless way." Of the alienated students Deresiewicz has met, "the problem isn’t their individual choices; it’s the age." And Rothman has the references to Proust and Baudelaire and James Joyce and T.S. Eliot to prove it.

But does everybody really feel this way, or just the members of that class constellated around the Ivy League? Deresiewicz himself believes that, by finally rebelling against his family's insistence that he pursue a "practical" education and career in the sciences, he has escaped the "emptiness and aimlessness and isolation" that afflict his sometime students. It's not just their manic busyness that Deresiewicz complains of, after all, but the pervasive lack of genuine purpose in their lives. Not every too-busy modern person regards her activities as meaningless or feels like a robot. And if there's any place where a young person should expect to see her search for meaning welcomed and nurtured, it's in a fancy college.

The great thing about blaming modern life for the conditions of modern life is that there's nothing to be done about it. Modernity is a force beyond anyone's control, the water we all swim in. And so the Ivy League frame of mind must seem to most of the people who have written about "Excellent Sheep," because they all seem to be Ivy Leaguers themselves, and trapped in the paroxysms of guilt, pride, denial, deflection, defensiveness and ambivalence that comes with that status.

We only have our own college experiences to judge by, perhaps. My own suggests that 40 years of mounting economic inequity and insecurity combined with a divestment from the public sphere is most to blame for both the fetishization of a handful of private universities and the dehumanizing competition to get into them. I never even considered the Ivy League. I was able to work my way through college with a part-time job at an ice cream parlor and got a splendid education, thanks to the state of California and the will it once had to invest in such things. I was financially independent of my parents and graduated with minimal loans to repay, which gave me time to find my way in the world afterward. Contrary to what some skeptics insisted back then, I still use what I learned as an English major almost every day of my life, but even if I didn't, you'd never hear me complain. I turned out OK. And besides, I loved every minute of it.

Joshua Rothman on "What College Can't Do" for the New Yorker