Why does the Magicians trilogy keep raping and killing off its best characters?

Lev Grossman creates amazing, complicated women -- then gruesomely dispatches with each one 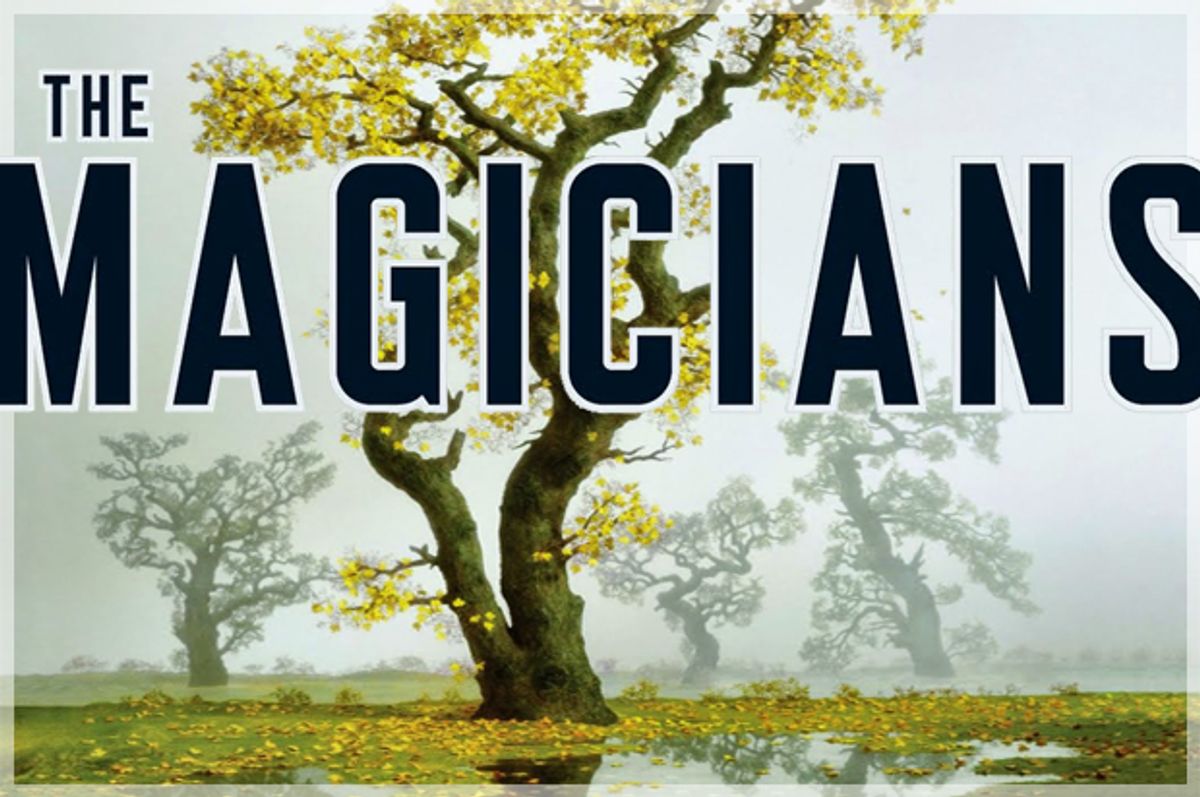 There is much to love about Lev Grossman’s Magicians trilogy. The books — which began with "The Magicians," in 2009, and just wrapped up  this month with "The Magician’s Land" — are massively absorbing, very funny, occasionally heartbreaking. They’re just pulpy and juvenile enough to make for a great weekend diversion, but just smart and literary enough that you don’t feel cheap afterward. The Magicians trilogy has wit, style, soul and — thanks in part to Lev Grossman’s position as the book critic for Time — an encyclopedic knowledge of the conventions and flaws of the fantasy genre, which this book frequently mocks, and subverts whenever possible.

Which is why, unfortunately, the reader’s attention is inevitably drawn to the one irritating fantasy cliché that the Magicians trilogy doesn’t avoid. It's not just that it's an epic Hero’s Quest narrative centered entirely around a white, straight guy. It's the absence of a female lead who can make it through even one entire installment of the trilogy without being killed, raped or otherwise horrifically traumatized to fuel that guy’s arc.

The trilogy centers around young Quentin Coldwater — a social reject, a puzzle-solver, smarter than average; your usual ready-made avatar for the nerdy, socially disenfranchised white men presumed to be buying fantasy books — who discovers that magic is real when he is invited to an exclusive private college for magicians. (Harry Potter references are dropped every few pages, to let the reader know that it’s an intentional resemblance.) Soon enough, Quentin has learned that Fillory, the extremely Narnia-esque fantasyland of his favorite children’s books, is real too, and he’s off to save it from certain peril. In between all this, we get your usual coming-of-age parable. Which is actually the redeeming feature of the series: Rather than aiming for the 12-to-18 YA market, this series is about the ages between 18 and 30. And unlike Harry Potter, Quentin doesn’t learn that he’s inherently special and destined for greatness: He learns, slowly and painfully, that he’s not. He drinks too much, tanks relationships, takes unfulfilling jobs, gives up on his childhood dreams, and, Grossman is brave enough to suggest, becomes a better person by giving them up. In a culture obsessed with youth and wish-fulfillment, these are books about the heroism of acting your age.

Still: This subversive streak might resonate more, were it not channeled through a traditional white, straight, male lead. I'm not the first to point out that Grossman's story seems conflicted about who its protagonist is -- in Slate, Choire Sicha recently wrote about why Julia is the trilogy's real heroine. But it's frustrating that genre epics, especially the ones that tap the Joseph Campbell “hero’s quest” formula, have always belonged to these “Everyman” characters: Harry Potter, Luke Skywalker, Frodo and Bilbo Baggins, etc. We still see white, straight and male as the default setting for human experience; stories about them can be marketed as “universal,” whereas everything else is assumed to cater to an interest group. (Remember Joanne Rowling, not only bowing to the convention of the male hero, but degendering her name into “J.K.” so as not to scare off boys.) It doesn’t help that Quentin is far from the most likable of everymen; when Q.C. starts whining, he can give even the legendarily wimpy Luke Skywalker a run for his money. This has given Grossman’s books a bad case of what a friend calls “Hermione syndrome”: Quentin is frequently eclipsed by side characters who are vastly more interesting and sympathetic than he is. Most of them are women. And most of them are not long for this world.

I have fallen in love with each female lead Grossman introduced, only to see them invariably fed into a narrative meat-grinder to teach Quentin a lesson. Consider Quentin’s first girlfriend Alice, from "The Magicians": She’s the most obvious Hermione analogue of the lot, a withdrawn and socially awkward girl who studies harder than anyone else in class, in part to live out the potential of her magician brother, who was killed in a tragic accident. She’s smart, hardworking, intensely ethical, in love with learning; she’s also dead by the end of the first book. In "The Magician King," we get Julia, Quentin’s high-school crush, who is (if possible) even more wonderful than Alice: She was rejected from Brakebills, the magic academy, and had a nervous breakdown before resolving to teach herself magic by any means necessary. In non-mythical terms, while Quentin was attending the Ivy League schools and scoring internships, Julia was stripping to pay for night classes at a community college. Julia, like Alice, is brilliant; she’s also tough, worldly and intensely, vocally critical of Quentin’s immense privilege. Whenever Quentin gears up for another Skywalkerian whine — this time enriched by mentions of his dead girlfriend Alice — Julia is there to remind him there are people who’d kill for his life. For her service, Julia is granted a lengthy, exceptionally graphic rape scene at the hands of an anthropomorphic fox-god, then shunted off to another dimension.

Grossman lives to name-check and subvert the tropes of genre fiction. In the middle of a heated battle scene in a fantasy kingdom, he’ll pause to explain the ethical problem with Tolkien’s conception of orcs. So he’d almost certainly be familiar with the infamous tradition of “Women in Refrigerators,” coined by comic fan Gail Simone in 1999: It means, basically, that female characters are often killed off or otherwise grotesquely traumatized (raped, tortured, paralyzed, stripped of superpowers, etc.) to motivate angst on the part of male leads. Consider Anakin Skywalker in those god-awful "Star Wars" prequels, whose wife and mother are both killed to push him over to the Dark Side; consider Tyrion Lannister, in "Game of Thrones," whose first wife, Tysha, was gang-raped by an entire military regiment, just to explain why he only dates prostitutes. Taken at face value, that’s very sad: Taken as a trend, it indicates that women are disposable, and that men’s emotions are more important than women’s bodies and lives. For extreme, chronic cases of fridging, of the sort that afflict James Bond or Quentin Coldwater — “any love interest that the hero meets is either wormfood or otherwise removed forever from his or her life by the end of the episode or arc” — the cliché-aggregating site TV Tropes has invented an entirely new term, the “Cartwright Curse.”

"The Magician’s Land" is a chance to make the trauma of these women mean something. Yet this remains Quentin’s story throughout, and the women are still defined mainly by how they affect him. We’re even granted a new female lead, Plum, who never quite comes together. Supposedly she enjoys practical jokes, and has a “manic streak,” but Grossman has to tell us these things, because, for the most part, she’s just the girl in the picture. (It doesn’t help that Quentin has, shall we say, a type. All of the female leads in this series are pale, brainy beauties, simultaneously ethereal and earthy, pretty but not movie-star pretty, smart but not too smart to like Quentin. You get the feeling that none of them ever wear makeup, that their perfume comes exclusively from lavender-scented soap, and that all of them own a first edition of Tina Fey’s "Bossypants." The instant we meet Plum — “a sharp-featured young woman, girl-next-door pretty, if you happened to live next door to a grad student in astrophysics,” paging through a book of Piranesi etchings — we already know who Quentin’s female companion for the duration of the book will be.) Both Alice and Julia return, but they’re purely mythic figures: Alice has become a demon made of pure rage, and Julia has become a minor earth goddess.

As allegory, this makes sense: Alice is Quentin’s worst breakup, and the woman that he failed most profoundly, so of course he would see her as one of the Restless Dead, a monster from his past that haunts him still. Julia, as Quentin’s first love, will always be elevated over mere mortals. But this isn’t just metaphor; it’s the actual plot. And it does a disservice to both characters, who’ve been through traumas that vastly exceed Quentin’s in both scale and narrative interest, yet find themselves playing backup, reinforcing his feelings about himself. Ask yourself, dear reader: Just after Alice has been unspeakably traumatized, and while she is possessed of a demonic and inhuman rage, does it actually make sense for her to pause and note that Quentin “never knew it, which had saved him from developing one of those pretty-boy personalities, but objectively he’d always been handsome”? Or that she can embrace her “humanity” by admitting she wants to sleep with him? Those aren’t the thoughts of a woman, let alone a “crazy magic rage-demon.” They’re just literary ventriloquism, a female character reciting what many straight men want to hear about themselves, which is that — no matter how nerdy and unattractive they may feel — they are both objective hotties and morally superior to other hotties, possessed of a sexual allure so powerful it can induce instant forgiveness from the angriest of women, or perhaps even save her soul.

This isn’t a dismissal of the books, which, for the most part, are great. They’re the rare best-sellers that have truly earned their sales; they arrived in my life through pure, urgent word-of-mouth, and the instant I picked them up, I started telling people they had to read "The Magicians." But for a series so smart about narrative conventions, it’s a shame to note that a few of the most regressive conventions about gender and trauma are fulfilled to the letter. Late in the book, we’re treated to a tantalizing glimpse of a magic library, where the book of everyone’s life is stored: “The story of your life, from start to finish. Who you are and what you did and what you’re going to do.” Every character has one, we’re told. It’s a beautiful vision. Still: It also seems like a tease. Somewhere in there, there’s a book I’m dying to read. It’s the one that’s entirely about Julia.