Like the rest of the VMAs, her megawatt performance was a paean to pop culturally acceptable femininity 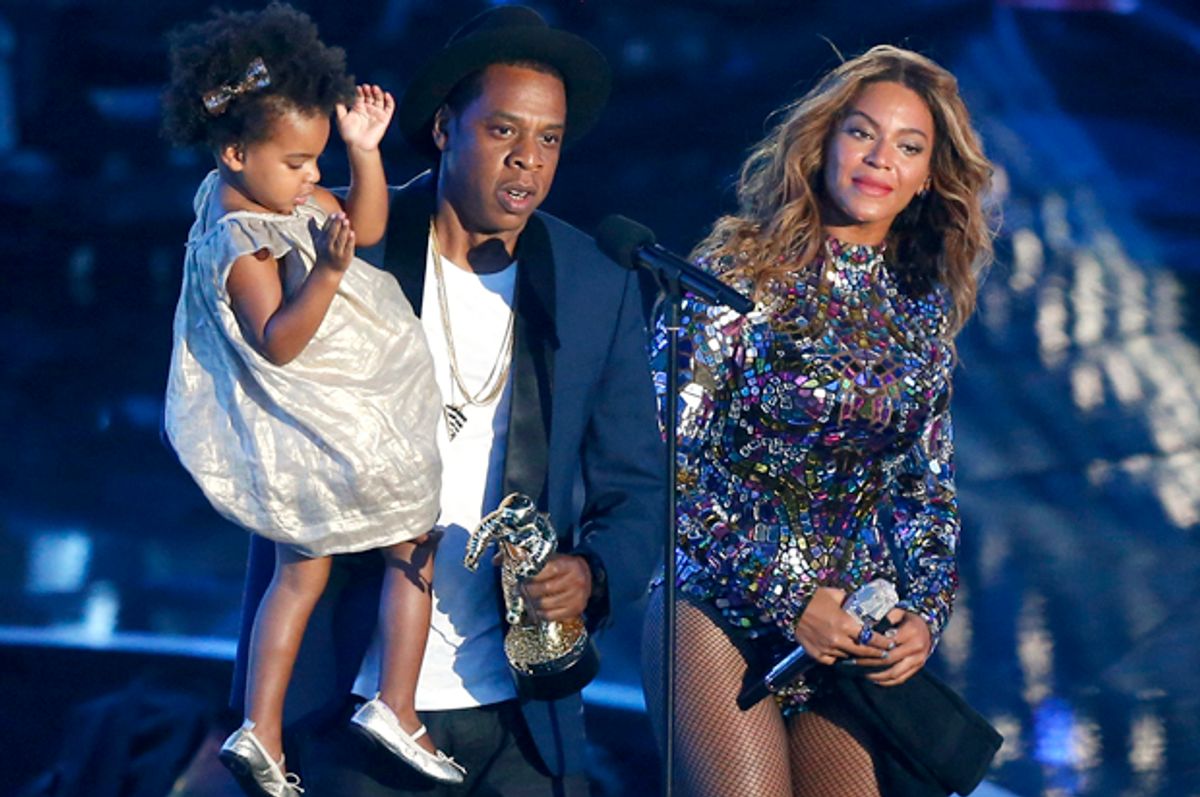 MTV’s Video Music Awards usually relies on a certain kind of cheap stunt — Britney Spears and Madonna making out, Kanye West interrupting Taylor Swift with “Imma let you finish,” last year’s twerk-heard-‘round-the-world from Miley Cyrus — to maximize the cultural relevance of its annual celebration of an art form the channel has mostly abandoned. Last night’s VMAs were different. This year, MTV crafted a two-hour paean to pop culturally acceptable femininity, building seamlessly to a climactic performance by Queen Beyoncé that proved, once and for all, that she alone is the sum of MTV’s woman parts.

The men of the VMAs were beside the point this year — forgettable performances by Sam Smith and 5 Seconds of Summer, with Maroon 5 playing the parking lot. Even Kanye's reliable self-aggrandizing felt perfunctory. And even Usher owes his stand-out moment to a robust cameo by Nicki Minaj, who also took first billing over Jessie J and Ariana Grande in their show’s opening trio (“Break Free”/“Anaconda”/“Bang Bang”) with her strikingly sensuous and playful “Anaconda.” When Minaj found herself barely contained in a clutched-together minuscule outfit after a quick change, her self-aware eyebrows (“what, me worry about busting out of this dress?”) more than anything put Jessie and Ariana in their rightful, second-tier places.

The most talked-about guy of the night, in fact, was a pure invention of Miley’s redemption arc. No foam finger or booty shorts this year for our girl — she’s all grown up, demure in a bandeau top and high-waisted pants, shedding a series of respectable tears at the edge of the stage as her date, a Hollywood-ready youth shelter representative, read a speech about the plight of homeless teens in Los Angeles during her video of the year acceptance for “Wrecking Ball.”

But last night’s wholly girly show — including Taylor Swift’s chipper performance of her new single “Shake It Off,” and, even better, her awkward chair-dancing next to BFF Lorde, inexplicably the first female winner of best new rock video for her pop anthem “Royals” — was a build-up to Beyoncé, the apex of femininity, whose 16-minute show-stopping medley set new levels of aspirational contemporary womanhood that is hers alone, in pop culture and anywhere else.

Who else but Beyoncé can telegraph the notion of having it all so, well, flawlessly? Work hard at everything, the Beyoncé performance says, and you can be not perfect — that’s boring — but perfection. She’s a sex-positive boss running her own unstoppable business empire, with her supportive (what divorce rumors?) husband and gorgeous toddler on the sidelines, cheering her even as she admits, “I’m not feeling like myself since the baby.” And yet in her eye contact with the camera, as she pleads, "I'm just human,” she teaches a master class in conscious vulnerability.

Beyoncé can croon “Let me sit this ass on you” and come off as just another working mom, really, only with a better trainer and stylist, her prop stripper poles straight out of a suburban aerobics class, then rise above reproach, preempting pearl clutching about role models with an oversize electronic FEMINISM banner emblazoned behind her as she samples Nigerian author Chimamanda Ngozi Adichie’s speech about empowering girls to own their sexuality, their brains, their ambition.

When Beyoncé ends on “XO,” dedicated not to her man but to her legions of fans, she cements their loyalty and their belief in the church of Beyoncé — she still has all the time in the world for her girls, without whom she’d be nothing, she says, nothing at all. As Jay Z, little Blue Ivy on his hip, joins her onstage to present her with the Video Vanguard award, there are happy tears, kisses, her daughter clapping and crowing “Yay Mommy!” — a pitch-perfect plug for the family business.

In that moment, she became aspirational not only to her fans at home but to her colleagues in the VIP section, who have played their parts in Beyoncé’s narrative all night long, even if they didn’t realize it. To outspoken sexpot Nicki, aw-shucks Taylor, brainy Lorde, the freshly vulnerable Miley: Play your cards right and some day all of this — the Beydom itself — could be yours.

Beyonce Feminism Having It All Video Vmas