White defenders of officer Darren Wilson are raising money by slandering Mike Brown, with some help from Fox News 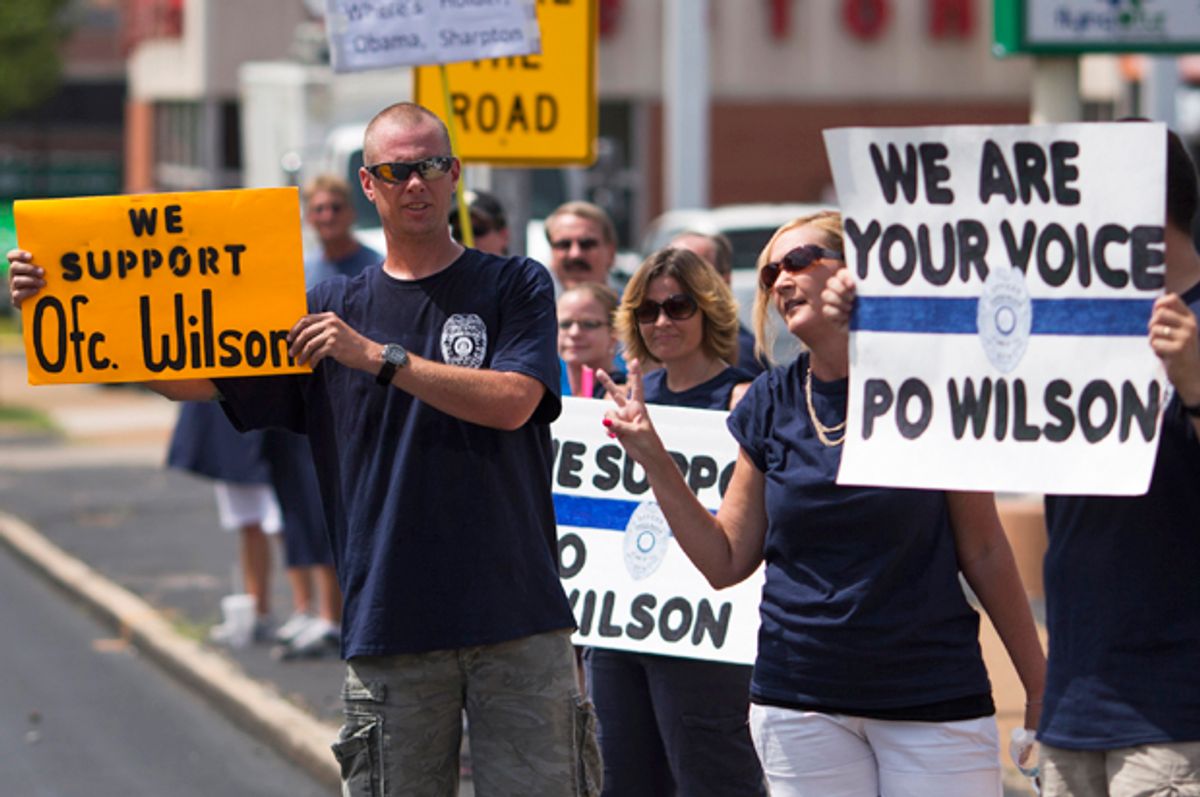 Not surprisingly, a thriving franchise of the nation’s booming white grievance industry has opened up in Ferguson, Missouri, over the last week.  It’s worth examining closely. As usual, it consists of two parts lies, one part paranoia, but at its heart it’s a big grift.

The weekend featured multiple protests supporting Darren Wilson, the missing Ferguson police officer who shot an unarmed Mike Brown on Aug. 9. His superiors apparently withheld Wilson’s name long enough for him to delete all social media accounts and skip town, but his supporters are declaring Wilson, not Brown, the victim here. A GoFundMe site raising funds for Wilson’s defense – though he’s not been charged with anything – garnered not only $250,000 in donations, but so many ugly racist rants GoFundMe administrators had to disable comments for the site. (They’ll have no trouble taking a cut of the racists’ money, of course.) Wilson’s supporters say they’ve raised $374,000 online and at local events, “to support his family,” one woman told MSNBC.

Why, besides racism, are Wilson’s supporters so convinced of his innocence? Well, any good grift will involve a hoax or two, to gin up the sense of outrage. First there was “Josie,” a purported friend of Wilson’s who called in to a radio show helmed by gun-loving wingnut Dana Loesch to tell Wilson’s side of the story. “Josie” insisted that Brown attacked Wilson, grabbed his gun, and the terrified cop shot only in self-defense. The problem? The details were almost identical to those shared on a fake Facebook page set up to look like Wilson’s own. But before the tale could be debunked, not only Fox but CNN had reported on “Josie’s” tale with some credulity. As karoli notes over at Crooks and Liars, it’s not clear whether Loesch was punked, or was in on the punking.

Then we saw right-wing blogger Jim Hoft, named “the dumbest man on the Internet” by Media Matters, peddling a phony X-ray or CT scan purporting to show that Wilson suffered a fractured eye socket scuffling with Brown. Unfortunately, a little sleuthing revealed the image in question came from a facility at the University of Iowa and had nothing to do with the Ferguson case. Oops. Of course Fox ran with the story, but ABC News also reported that Wilson had suffered a “serious facial injury,” claiming its own local source.

Of course Ferguson’s white grievance industry is getting major help from Fox News, the grievance industry’s biggest grifters. It’s funny, a couple of weeks ago Attorney General Eric Holder spent a few days as Fox’s favorite administration figure, with Bill O’Reilly and the crew at "The Five" piously instructing Ferguson protesters to trust the attorney general, who had taken over the inquiry into Mike Brown’s shooting. No more. On Friday’s “Five” Andrea Tantaros declared that Holder “runs that DOJ like the Black Panthers would,” while the whole team endorsed her claim that the attorney general is “race-baiting.”

Fox has peddled every allegation of wrongdoing by Mike Brown from the beginning of the story. On Fox and Friends Monday morning, Linda Chavez argued that the media should stop calling the teenager “unarmed” because “we're talking about an 18-year-old man who is 6-foot-4 and weighs almost 300 pounds, who is videotaped just moments before the confrontation with a police officer strong-arming an employee and robbing a convenience store.” So Mike Brown can’t be considered unarmed because … he had arms?

It’s worth noting the way the phony information and paranoia peddled by well-known, oft-discredited right-wing media activists like Hoft and Loesch makes its way into the mainstream media ecosphere, again and again. CNN media critic Brian Stelter called out Fox this weekend for peddling the fractured eye socket story, and good for him, but to my knowledge he didn’t rap his own network for peddling the phony “Josie” story. The right’s influence on big stories like this can be more subtle and insidious: Who believes the New York Times would have stooped to calling Mike Brown “no angel” – the evidence? He’d been in some “scuffles” and had “taken to rapping” – without the right wing braying about Brown’s stealing cigarillos and making up stories that he did even worse?

All that media support fanned the flames of white paranoia that manifested in the pro-Wilson activities back in Ferguson and St. Louis. You could see the trademark combination of innocence, fear and near-hysteria that powers the white grievance industry. “We will no longer live in fear,” one woman told the Guardian, as though a white person had been gunned down, not an unarmed black teenager. “We’ll all see this in the end that it was a good shooting,” a Wilson supporter named Tina Morrison told BuzzFeed, more than a little creepily. “You know, it was a good kill.” Unlike Morrison, most Wilson supporters refused to tell journalists their names, claiming they fear retribution at the hands of Brown’s defenders.

That paranoia about retribution is shared by the backers of Wilson’s GoFundMe project. It’s organized by Shield of Hope, a “charitable organization” that lists Ferguson Police Department public relations officer Timothy Zoll and Missouri state Rep. Jeffrey Roorda as directors. Roorda became nationally known for a 2009 bill that tried to keep the name of police officers involved in shootings private, because “releasing a name could put someone in grave jeopardy,” he explained.

Of course Mike Brown was the one in “grave jeopardy” in his clash with Darren Wilson. So far Wilson’s shrill supporters have raised an estimated $374,000 for a man who hasn’t been charged with a crime, who never produced an incident report of his confrontation with Brown, and who’s consistently been protected by his superiors. Meanwhile, they’ve outraised supporters of the Brown family, and they’ll likely raise more. The white grievance industry is getting good at this.