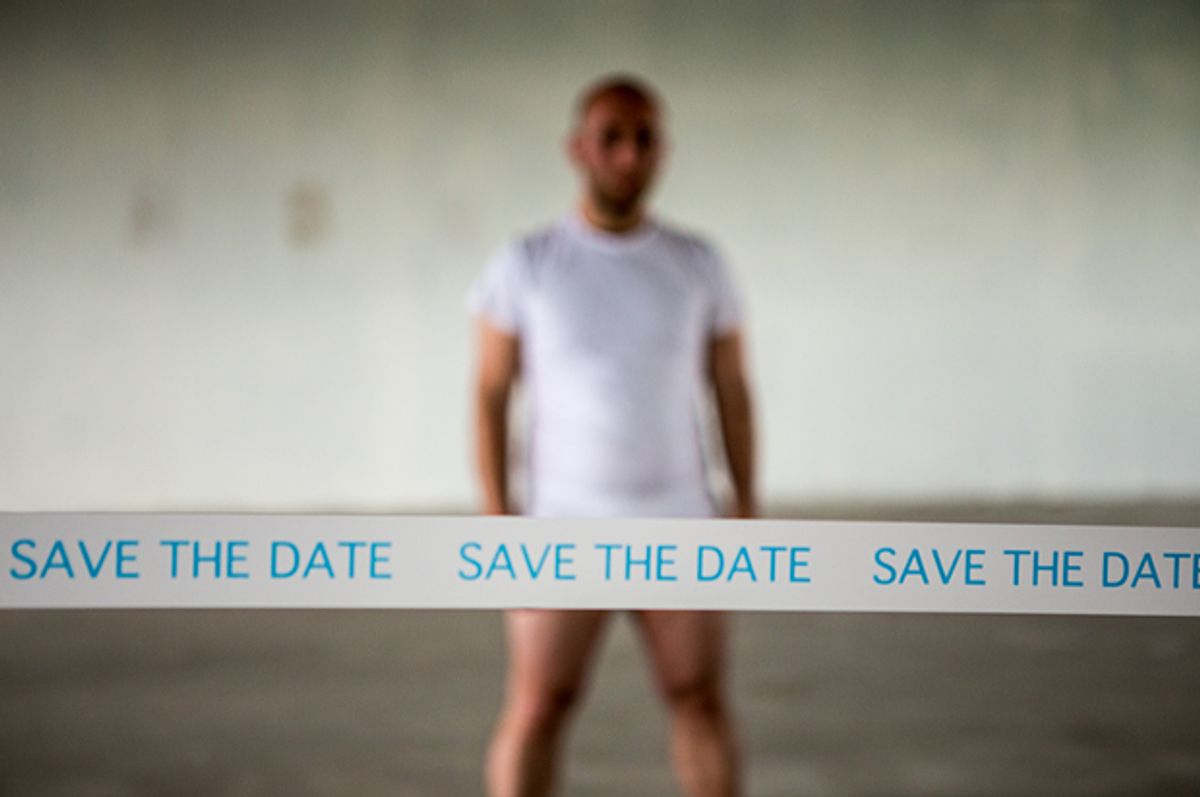 Mischa Badasyan is lonely. The Russian-born performance artist has used gay hookup apps. He's cruised parks late at night and met guys in clubs. But he's never had a "love relationship," as he puts it. So, the Berlin-based 26-year-old is doing what probably no one else in the world would do in such a predicament: He's committing to dating and sleeping with a new person every day for a year -- for art. And a filmmaker will be documenting the whole process.

I spoke with Badasyan by phone about love, definitions of sex, and the death threats his latest project has inspired.

Why are you doing this project?

Different reasons. The biggest one is I decided to make personal performance art. Before I was working on political and social issues. Now I decided to bring attention to my story, to my private life. This is about loneliness and love relationships, because I've never been in a love relationship so far. I'm going to share my love with the people that I meet.

You said you haven't been in a "love relationship"?

Never in my life.

Oh my god. That's a question for the next three years. I grew up in Russia and I didn't come out, I never met any gay people -- oh yeah, I'm gay, by the way -- and I never met any gay people. Then in Germany I decided to have the freedom to be free and to come out. Once I came out I met a lot of people and it was a nice beautiful time, but still there wasn't a guy that I would like to be with or people didn't like me. It's always either I like someone or nobody likes me. It just hasn't happened yet.

Will you tell your partners about this project?

No. Although people are starting to send me messages on Facebook and email [about the project], so it's hard to keep a secret. Those people who contact me I also ask if they want to be in the movie. Basically if I am going on a date or looking for someone on the Internet I'm not going to tell them.

Yeah, that is the idea. Life is unpredictable, though. I don't know what is going to happen in six months. I might find some people who only want to be into group dating or there might be a lot of different stuff. People are contacting me from all over the world. From Brazil, London, Sri Lanka, Tunisia.

Where will you meet your partners? It sounds like you're already having people contact you, but how else will you find people?

It could be parks, on the street, bars, clubs, whatever.

Are you at all worried about not finding enough people that you're actually interested in sleeping with?

Yeah, it will take time. Maybe I won't find someone that I really like at first and get a little down and try to get anyone that is just online. The idea is not the sex. Sexual intercourse is just the expression of the idea. My idea is about meeting people. I feel kind of lonely, so this is about making a relationship with the people I meet. That's the basic idea, and the important idea.

It's really about the loneliness, not the sex.

Yeah. Just having sex with people, it is not a big deal.

The media has been very interested in that aspect of the project.

Yeah, I know. That's why it became so popular on the Web. Of course it's a hot topic and everyone wants to know what's going on.

So are you really going to sleep with a different person every day?

Of course, I wouldn't joke. It's performance art, it's real life.

You're really going to do it?

[Laughs] Yeah, are you kidding? I wouldn't make a joke about it.

What if you feel an emotional connection to someone? Will it be difficult to continue doing the project?

Yeah, of course. Everybody asks me now what will happen if I fall in love. That's the biggest danger. I might meet people that are very nice that I want to meet again. It may be hard to say goodbye to go to another one. I'm not going to say goodbye and break all contact but I will keep [doing the project]. It'll be very hard to keep energy for everyone I'm going to meet.

It's not just about the gay community. It's also about society and how people deal with each other. There are a lot of different issues. It's getting political now because I'm getting a lot of harassment messages. One neo-Nazi wants to kill me, some messages say they will kill me in 30 days if I will not stop my performance. One Russian gay website, they put a survey that asked people if they want to sleep with me and the choices where "yeah I want to sleep with this guy just for the art" and the second one was, "no, he's just ugly, he's not beautiful."

It must be scary getting those death threats.

Yeah. Of course, most of the comments are positive, they like me and support me.

Where you surprised to get death threats in response to this?

Yeah! I gave only one interview and now I'm all over the world. Just this morning I gave an interview for TV Channel in South African and then for the a guy from Gay Pride in Copenhagen and now I'm talking to you. Every day it's like this.

Do you think the attention can be sustained throughout the year of the project?

I'm not sure. I think in a few months people will forget why I'm doing this, I might disappear from all the media.

What if you feel sick one day? Will you push yourself to sleep with someone?

I define sex differently. For me having cyber sex is the same as having sexual contact with someone in private. Sexual contact for me is like emotional contact. It's the emotional high. That's the most important part.

Will any of your sexual encounters actually be in the film?

This sounds like an exhausting project. Are you worried about burning out?

Yeah, for sure. That why I wanted to do [it for so long]. In this amount of time I can change myself, I can change my mind. If I did it for just a couple months nothing important will happen.

So what are you looking for in a "love relationship"?

I don't know. I'm not looking for any love relationship because I'm scared about meeting other people and knowing that I love someone else. For me, the most important part of a relationship is that we can create together, and someone I can emotionally be on the same level with.

What statement are you trying to make with this project?

It's about me. I'm not doing it for the whole world. This is about me and my loneliness.