The first excerpt of Dunham's book, just published in the New Yorker, is intimate in an entirely different way 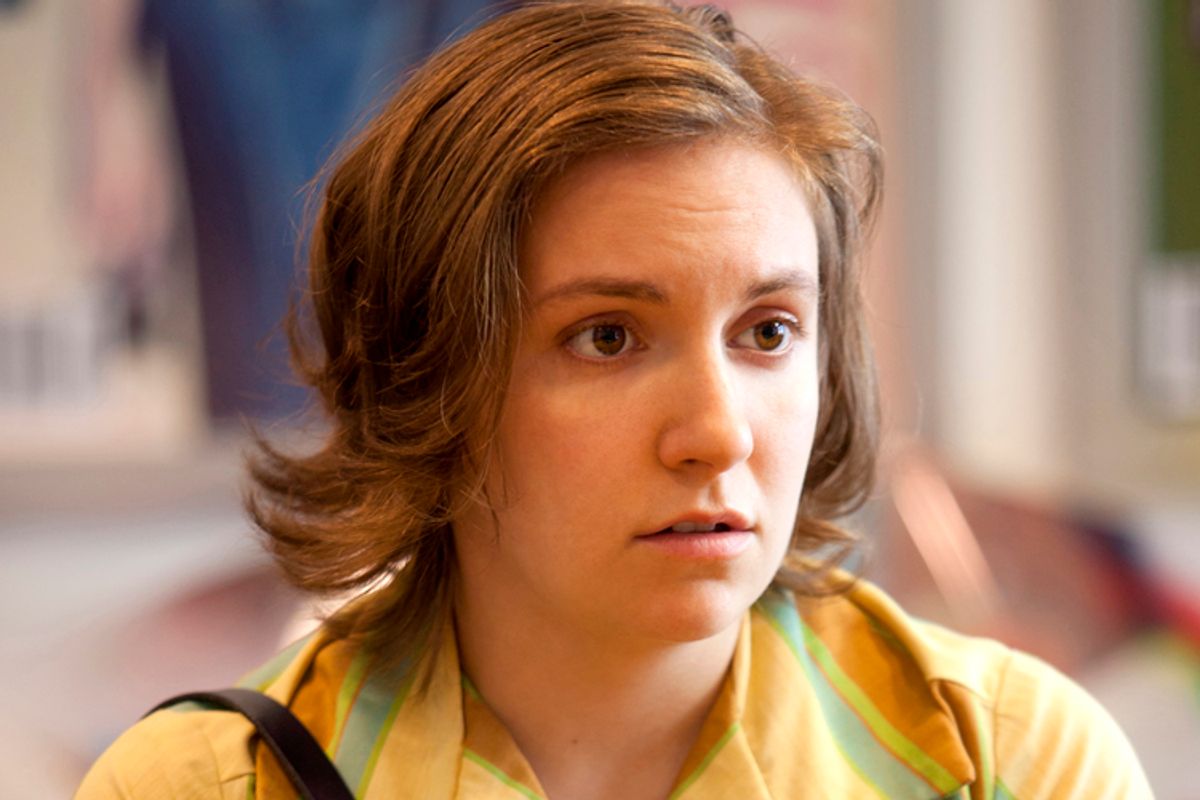 In her essays for the New Yorker, Dunham has demonstrated a fondness for the revealing childhood anecdote, as if to preemptively apologize for her personal quirks and failings. She begins last November’s New Yorker essay on her life-long fascination with takeout meals with an anecdote about believing the doorbell only rings when dinner’s delivered: “Family legend: I am four.” The essay is really about her mother’s best friend’s sudden death, which is to say it’s about how Dunham, now an adult, must acknowledge her own mother’s mortality, but she never really gets there in prose, choosing to stay within the safe, orderly corners of the childhood Styrofoam food containers she has already told us that she’s craved since before she could remember.

And in last March’s “A Box of Puppies,” Dunham reveals, “When I was a child, my greatest dream was to find a box full of puppies,” a disarmingly banal opening that hopes to explain why a person whose life is comically unsuited to dog ownership would adopt one anyway, as if that’s a thing that needs explaining to anyone with a desire to feel less alone in the world. Flashing forward to the present, she dissects her desire with a preemptively self-deprecating mark in the “pro” column, dedicated, perhaps, to her critics: “I’d be permanently rid of the whiff of self-involvement.” The essay later apologizes for itself by declaring how impossible it is to write about dogs without sliding into sentimentality, like that pure and human impulse isn’t the entire point of writing or reading about dogs in the first place.

Now, the New Yorker has brought us a peek into Dunham’s eccentric childhood that feels familiar on first contact. In this excerpt from her new book, she demonstrates how she’s grown as a writer since she sold said book — more sure of herself as the teller of her own story, less reliant on narrative feints and dodges. If this part is indicative of the whole, the book will be less a catalog of awkward life lessons filtered through a barely adult neurotic lens and more a self-assured memoir of living with and performing chronic anxiety through her work.

The problem with always returning to childhood to frame the present is that it holds the reader at arm’s length, even as it promises an all-access, up-close, authorized peek into the origin story. “I’ve always been like this,” the telling childhood anecdote explains, waving away the reader’s hesitancy to embrace a heroine’s less-appetizing tendencies and actions. “It’s not my fault.”

But in this excerpt, “Difficult Girl,” Dunham avoids that trap even as she uses the “when I was a child” opening device. She begins the essay about her boundary-testing relationships with various therapists throughout her youth with a warning shot about childhood anxiety: "I am eight, and I am afraid of everything."

It doesn’t read like a bid for sympathy. She admits she was, as she preemptively spells out in the title, a difficult child, but here her prose encourages empathy rather than irritation. In terse, immediate sentences, she rattles off the list of fears that should be ridiculous for an 8-year-old to harbor but are pretty much the things that feed into adult anxiety about the distant and too-close world: infectious diseases, rape, financial ruin.

And the use of present tense when narrating personal history rescues the reader from quirky sepia-toned past, placing us right alongside Dunham’s grade-school self’s naked nerves. When she writes of her childhood, “Every morning when I wake up, there is one blissful second before I look around the room and remember my many terrors,” it is difficult not to think, as an adult who’s 30 years older, me too, some days.

Even the humor is tinged with desperation, not the familiar self-deprecation of why she shouldn’t be allowed to adopt a puppy or resolutions to cook more soup. When she writes about self-diagnosing her OCD as a kid, her cry of "do I have to do everything myself?" reveals in a short glimpse the depths of an emotional isolation that’s a bit unsettling to witness from a narrator that young, yet familiar to any adult.

The tone isn’t new; funny and alienating is a device Dunham nailed through writing and performing Hannah Horvath, her “Girls” alter ego. It’s not hard to see the cinematic image she’s creating in a scene from her college years, when she climbs into a bed to join in (uninvited, but perhaps not unwanted) a tender mother-daughter bonding moment with her therapist and her therapist’s daughter, whom she has befriended quite deliberately, despite or because of the many boundaries that friendship crosses.

It would be an uncomfortable moment to watch on television — the secondhand embarrassment would be strong for Hannah, who can’t tell the difference between healthy intimacy and picking a scab and showing it off. But when Dunham allows the moment the dignity of its space on the page, minus the commentary of the camera visuals or musical score, what’s left is as unsettling as the idea of being cornered by Hannah herself at a party: Dunham’s urgent voice in the reader’s ear, whispering her unapologetic story. “If I’m still like this,” this story explains, “it’s probably my fault.”