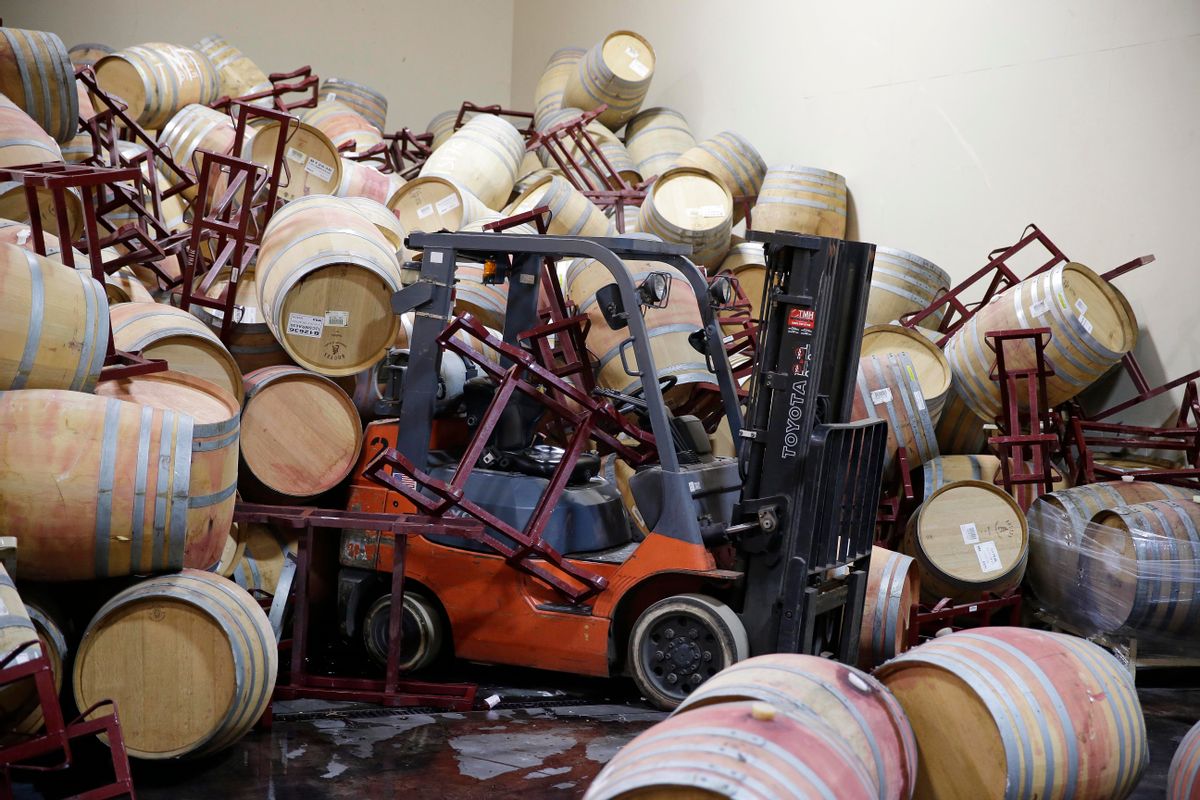 A forklift is partially buried in some of the hundreds of earthquake damaged wine barrels at the Kieu Hoang Winery Monday, Aug. 25, 2014, in Napa, Calif. A powerful earthquake that struck the heart of California's wine country caught many people sound asleep, sending dressers, mirrors and pictures crashing down around them and toppling wine bottles in vineyards around the region. The magnitude-6.0 quake struck at 3:20 a.m. PDT Sunday near the city of Napa. (AP Photo/Eric Risberg) (AP)
--

The president is speaking at the American Legion National Convention months after a VA hospital crisis rocked his administration.

The Israeli military is destroying multi-story buildings in an apparent new tactic aimed at increasing pressure on Hamas.

3. WHY US NUCLEAR EXPERT IS CALLING FOR PLANT CLOSURE

Regulators are being urged to shut down California's last operating nuclear facility until they can determine whether the twin reactors can withstand powerful shaking from nearby earthquake faults.

4. WHO LEFT THE EMMYS EMPTY-HANDED

Movie stars did not win any trophies at the awards show that honored such favorites as "Breaking Bad" and "Modern Family."

The administration wants to gather intelligence on the Islamic State militant group from the air.

Speakers at Brown's emotional funeral service sought to consecrate his death as another in the long history of the civil rights movement, and implored black people to change their protest chants into legislation and law.

Beijing wants serious content to replace reality shows on television -- but the films need to comply with the Communist Party line or else they are confiscated.

But Napa County Supervisor Bill Dodd says 80 percent of the valley's 500 or so wineries were unaffected, and encourages tourists to visit.

A rare, nearly flawless copy of the Man of Steel's comic-book debut nets $3.2 million in an online auction.

10. ANDY MURRAY ADVANCES AT THE US OPEN