Stephen Colbert isn't sorry for only having "one woman" writer

If only Colbert would discuss gender equality not just in his GOP-bashing, but in criticisms of his own show, too 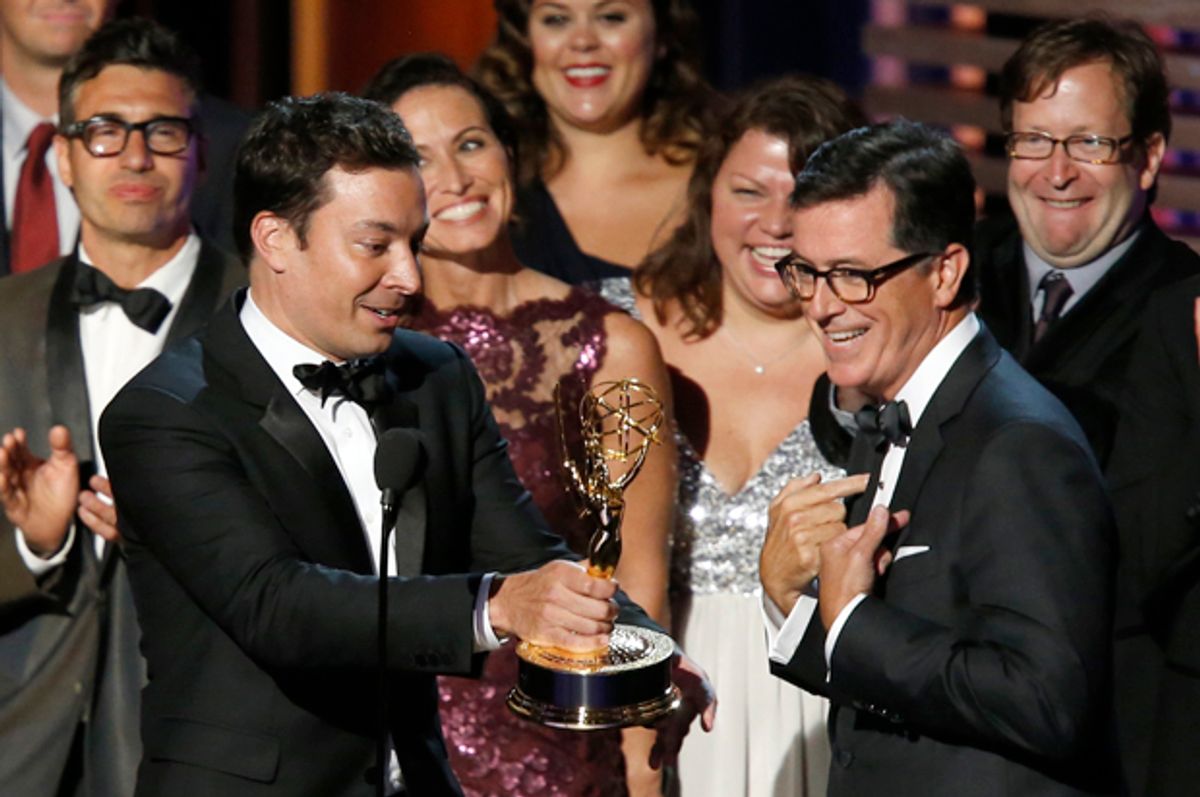 When Stephen Colbert accepted a well-deserved Emmy win for "The Colbert Report" last night, he thanked, among others, his writing team for helping to bring home another Emmy last week. "I'm so proud of those guys," he said while exuding charm and sincerity. Then he called out the single female on his writing staff of 18 --not by saying her name, Meredith, but by the tag, "one woman." Oof. "And, uh, sorry for that, for some reason," he added, awkwardly.

It's hard to criticize someone as funny and well-liked as Colbert, but his comment trivialized a real concern that extends beyond his show and into all of Hollywood: Women are underrepresented, and they are stereotyped. (I mean, in an Emmy bit attempting to bolster diversity the same hour, Sofia Vergara was literally put on a pedestal to be gawked at). Considering that the "Colbert bump" is a real phenomenon, and that Colbert is known for throwing his weight behind certain causes and rallying against certain bullies, it's frustrating that he hasn't taken this criticism seriously.

Recently, a few women on "The Daily Show" staff admitted in its first official podcast that they used to be uncomfortable doing segments about women's issues, a notion that's frankly absurd considering that women make up half the world population. The culture at "The Daily Show" is changing, they now say, and the candid conversations between these women have evolved into some of the show's most successful bits in recent history.

The same can't be said for "Colbert," which, according to Reuters, has a dismal record for hosting females, too ("The Daily Show's" record on this is a bit better): Out of a recent sample of 45 guests, Colbert hosted 73 percent men, 89 percent of whom were white. Only one guest was a woman of color. Considering Colbert's influence on culture, this sends the message, according to reporter Chloe Angyal, "that the most credible, interesting and relevant people out there – the people viewers should hear from and know about – are almost all white and male."

Alas, that's the same message we received from the Emmy Awards Monday night. At the red carpet, E! host Giuliana Rancic asked women about their dresses, hair and purses. The men, ostensibly there to boast the same accomplishments, instead fielded questions about their work and their opinions. Anticipating the red carpet double standard, the Representation Project launched the #AskHerMore campaign on Twitter:

At the carpet itself, comedian Sarah Silverman, who went on to win an Emmy, teased out the absurdity of Rancic's line of questioning in a hilarious segment that soon went viral: After Rancic commented on Silverman's breasts, Rancic asked about her dress. "I'm wearing Marni, the character from 'Girls,' Marni with an 'i'," Silverman joked. Then came the dreaded mani cam --"I've been on the road, these are working hands!" she cried in protest. In a final genius moment, Rancic then invasively went for Silverman's purse and opened it. She found Silverman's pot stash, along with "money, lipstick, a little mirror, my license."

The segment is a wonderful contrast to Colbert, who, when faced with a valid feminist critique, essentially raised his hands and gave up. Silverman, however, decided to do something about sexism with what little platform she was given that night. Comedy can be transformative, and almost no one wields more of that power than Colbert. His platform could boost feminism if he acknowledges it not just in his segments cutting down the GOP, but in criticisms of his own show, as well.