With so much support for medical marijuana, Dems could get surprising boost on the ballot. Except one big holdout 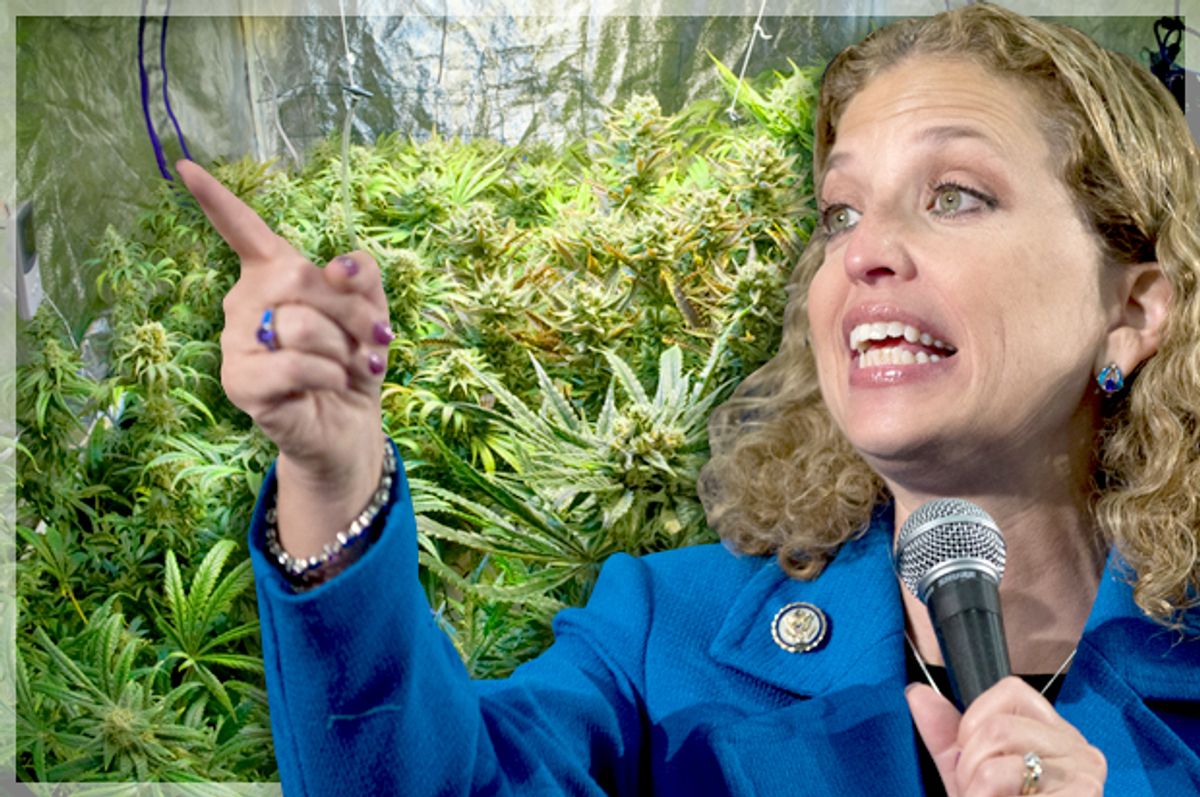 The midterm election is almost in full swing and the lies and obfuscations are coming fast and furious. Yesterday, we found out that Karl Rove's group American Crossroads is running ads against foolish Democrats who jumped on the deficit reduction bandwagon and supported (or even implied they might support) cuts to Social Security and Medicare during the Grand Bargain crusade. This shouldn't come as any surprised since the Republicans did exactly the same thing back in 2010 when they ran ads all over the country attacking Democrats for cutting Medicare as part of the health care reform. Needless to say, the GOP demagogues who have been attacking Medicare as "socialized medicine" since the day it was passed were not philosophically opposed to Medicare cuts.They were at the very same time proposing that the elderly's health care lifeline be turned into vouchers they could use to comparison shop for their health needs. (If there's one thing seniors would love is be required to spend their time searching for surgical bargains.)

But that's beside the point. The Republican Party is increasingly dependent on the elderly, white population for votes and the good news for them is that elderly people are more inclined to vote in off-year elections than anyone else. These ads are designed specifically to make sure they are even more motivated than usual to get themselves to the polls ---  and confused enough to believe that the long-term enemies of Social Security and Medicare (the Republicans) have inexplicably changed sides and are now their protectors.

One of the other ways both parties have of getting a higher turnout in off year elections is to get initiatives on the ballot designed to get their bases to the polls even when nobody running for the office is sufficiently sexy or frightening to rouse them from jaded ennui that characterizes the American voter in most elections. Studies have shown that a controversial ballot initiative can boost turnout by as much as 4 percent in off year elections. For years the Republicans used "gay marriage" as the boogeyman to rouse their social conservative voters but that seems to have backfired on them in recent years as marriage equality is now being routinely acknowledged by legislatures and the courts.

Today it's the Democrats who are taking advantage of the ballot initiative process to push for a loosening of marijuana laws in states across the country and having some big successes. In fact, there's good evidence that while the youth vote overall stayed nearly exactly the same percentage of the electorate in 2012 as 2008, in the states where marijuana legalization was on the ballot, the 18-29 year old vote went way up:

In 2008 young people made up just 14 percent of the vote in Colorado but this year it was 20 percent. Even more incredibly, in Washington State the youth vote went from just 10 percent of the electorate last election to 22 percent this time.

In Oregon there was also a 5 percent point increase. Polling last spring showed a very big advantage for Democrats if marijuana is on the ballot this fall:

George Washington University Battleground poll, a national survey of likely voters, reveals that nearly four in 10 respondents say they would be "much more likely" to vote if marijuana legalization issues were on the ballot. An additional 30% say such ballot initiatives would make them "somewhat" more likely to vote.

The numbers are encouraging to Democratic pollster Celinda Lake, who conducted the survey with GOP pollster Ed Goeas, because Democrats historically have a tougher time than Republicans in turning out voters in non-presidential election years.

Democrats all over the country are pushing these initiatives, whether for full legalization or medical use. This isn't a wholly opportunistic campaign.  There are real benefits to medical marijuana and since America has been running an experiment with the participation of tens of millions of people over the course of many decades now, it's clear there is little downside to the drug itself.  Whatever problems it's caused have been the result of prohibition and prison. Pushing for legalization makes sense on both substantive and political grounds.

One of the states where Democrats have high hopes that the marijuana ballot initiative will result in a higher turn-out among younger people is in Florida where the party hopes to unseat the odious GOP governor Rick Scott. Indeed, they organized the drive for Medical Marijuana early and a highly influential Democratic donor named John Morgan has spearheaded the campaign creating a group called United for Care.  They genuinely believe in the cause but there's little doubt that it is also hoped that this ballot initiative will boost the rest of the Democratic ticket. Morgan sent out an email just today  telling the story of his late father's illness and how much marijuana had helped make him feel better in his final days. He says:

Medical marijuana is legal in nearly half of the states in the country. And where it's legal - none of the scary, apocalyptic consequences promised by the opposition have come true. Violent crime has gone down, youth consumption has remained flat, and society has not collapsed.

Here's what did happen: patients got access to another form of medicine, safer and less addicting than what doctors were legally allowed to recommend before.

So what can one make of the fact that the Chairwoman of the Democratic National Committee is voting against medical marijuana in the House and has come out against the ballot initiative in Florida? That's right, the purportedly liberal Florida congresswoman Debbie Wasserman-Schultz is stridently anti-marijuana, even for medical purposes. This is, of course, her right as a representative of her district, but considering the political stakes for her state and the country at large, a leading Democratic Party official should probably have to answer for a position that's completely at odds with members of her party, especially the voters of Florida. This is a Quinnipiac Poll from last May that suggests that Wasserman-Schultz is very much out of the mainstream (emphasis added):

Florida voters support 88 - 10 percent allowing adults to legally use marijuana for medical purposes, if a doctor prescribes it. Support is over 80 percent among all listed groups, including 84 - 13 percent among voters over 65 years old.

She has claimed the initiative is too broad and her office has said she has concerns "as a mom." John Morgan of United for Care rebutted her claims:

Ms. Wasserman Schultz says she feels Amendment 2 is too broad, but in fact it’s quite specific. It establishes the right of a physician to recommend medical marijuana to a patient with a debilitating condition if its use would offer that patient relief. It then asks the Florida Department of Health to build a regulatory framework that makes it possible for that person to have access to the medicine he or she needs. It’s difficult to say whether Ms. Wasserman Schultz believes sick people should be kept from their medicine, or whether she thinks the public servants at the Department of Health are incompetent and would implement the amendment irresponsibly, but both positions are puzzling, unfortunate and wrong.

Wasserman-Schultz will likely retain her seat in November with no problems. But that hasn't stopped her friends from sending out emails begging for donations for help her beat back the bad guys. James Carville sent this on out just this week-end:

An outside group with money is like an alligator with a chainsaw -- you’re pretty sure he doesn’t know how to use it, but you don’t want to be nearby when he tries. My friend Debbie Wasserman Schultz knows what I mean. She’s seen outside groups attack her earlier this cycle than ever before. And while they didn’t do much damage, that doesn’t mean they won’t the next time they try.

You can see why she would not be happy with this damning indictment. It takes some real chutzpah to ask your donors to contribute to help fight the Kochs when this is the "outside group" that's criticizing you.

Perhaps this is just a personal decision on the part of the Congresswoman which, again, is her right. Maybe she just doesn't like pot. But as the highest official in the DNC, it's political malpractice to fight against this.