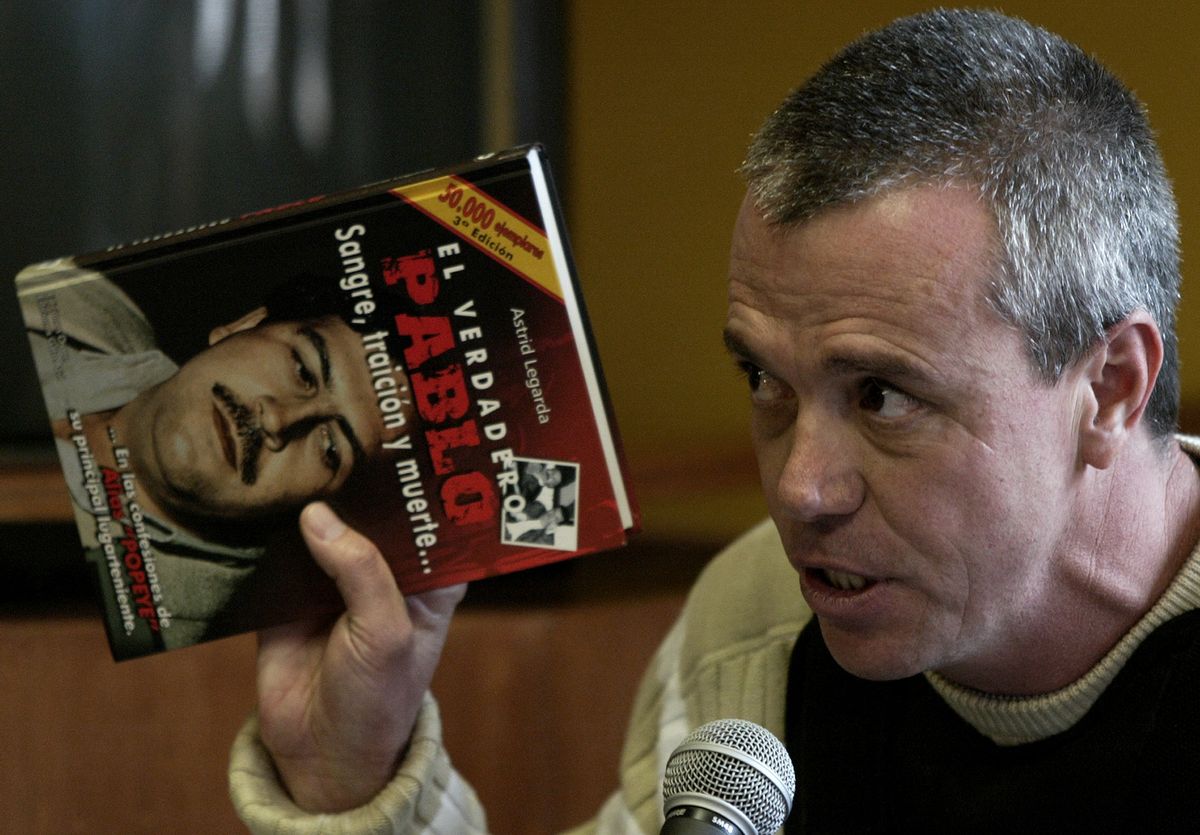 FILE - In this June 27, 2006, file photo, John Jairo Velasquez, a former hit man for Pablo Escobar, gives his testimony while holding a book titled "The True Pablo, Blood, Treason, and Death," during the trial against Alberto Santofimio Botero in Bogota, Colombia. Velasquez, better known by his nickname Popeye, was released Tuesday Aug. 26, 2014, under heavy police surveillance from a maximum security prison northeast of Bogota after 23 years behind bars for plotting the murder of a former presidential candidate. (AP Photo/ William Fernando Martinez, File) (AP)
--

BOGOTA, Colombia (AP) — A former hit man for Pablo Escobar, who confessed to hundreds of murders as head of the drug kingpin's army of assassins, has been freed from a maximum security prison under heavy police guard.

John Jairo Velasquez, better known by his nickname "Popeye," was paroled Tuesday evening despite protests from the relatives of his many alleged victims.

He had spent 22 years behind bars for plotting the murder of a former presidential candidate, Luis Carlos Galan during the campaign for the 1990 presidential election.

In a string of interviews anticipating his early release, Velasquez figured that he had about an 80 percent chance of being killed by former rivals after he was released. With the threat of a revenge killing lurking, he said he was considering relocating abroad. He also wants to sell to Hollywood the rights to an autobiography he wrote about his life alongside Escobar.

Galan, a cartel-fighting politician, had been favored to win Colombia's highest office during the apex of drug violence that engulfed Colombia two decades ago.

In a bid to fight extradition to the United States, Escobar ordered scores of assassinations — of judges, cabinet ministers, and journalists. He even downed a commercial jetliner because he believed Galan's political heir, then President Cesar Gaviria, was aboard.

Velasquez was one of Escobar's most-trusted lieutenants during the campaign of terror, joining the capo's Medellin cocaine cartel before he turned 18.

As Colombia's bloody cocaine turf wars faded from memory, Velasquez liked to boast in frequent interviews from prison that he killed 300 people with his own hands, including his own wife, and helped plan another 3,000 hits.

But the only murder for which he was convicted was Galan's. The family members of his many other alleged victims, as well as legal experts, grasped for an explanation when a judge last week determined he was eligible for parole.

"It's really sad that an assassin who committed so many homicides was sentenced for a single murder," said Gen. Carlos Mena, the head of Colombia's highway police who as a young officer helped US authorities hunt down Escobar, who was killed by police in 1993.

Velasquez, 52, took advantage of his time behind bars to obtain a number of academic degrees and to seek forgiveness from his victims. He also provided prosecutors with testimony that led to the conviction of a former justice minister close to Escobar for involvement in Galan's murder.

But even while expressing regret about his crimes, he continued to demonstrate admiration for his former boss.

"If Pablo Escobar were to be reborn I'd go with him without thinking," he told El Tiempo newspaper last year.