It's not just the South and Fox News: Liberals have a white privilege problem too

White privilege is a protection racket, the ultimate head start. The "liberal meritocracy" benefits from it too 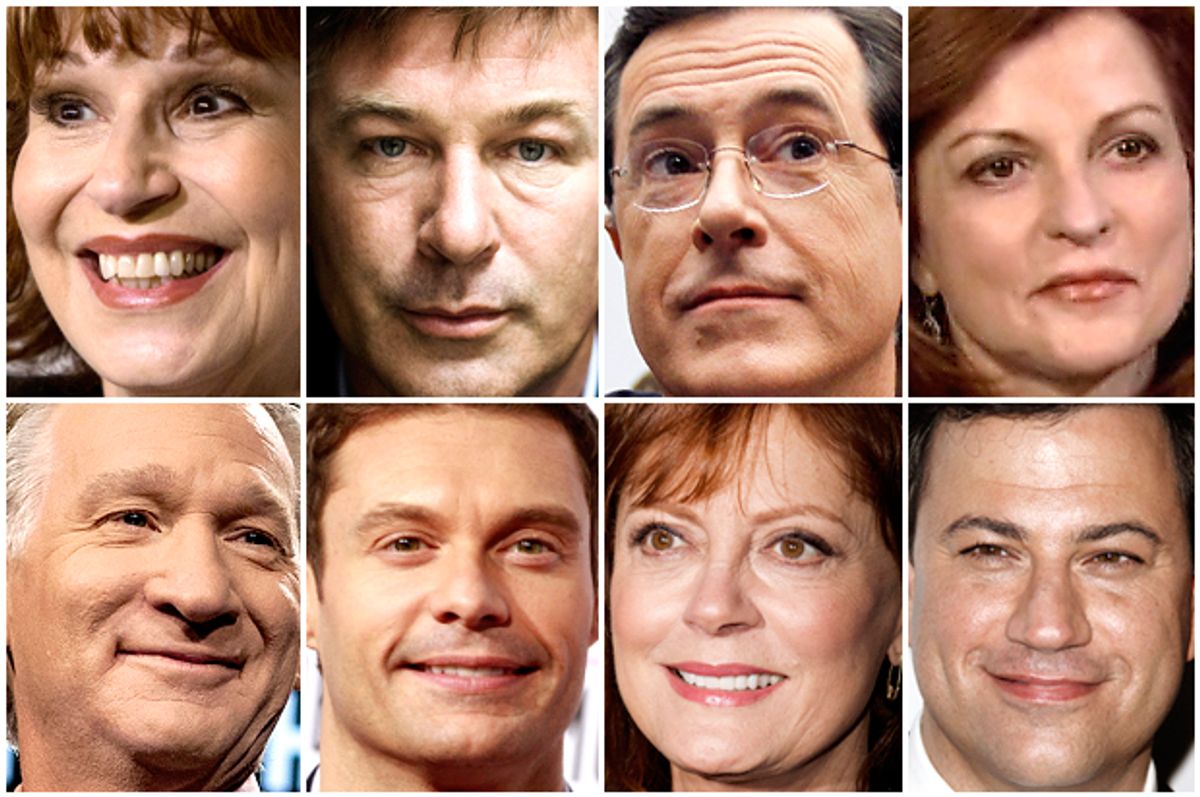 I spent 12 years of my life in St. Louis. I went to college there. Got married. Landed my first teaching job. Bought my first house. Between door-knocking for candidates and causes, driving around on ice cold nights in a homeless shelter van, and breaking bread in people's homes and churches and synagogues, I came to know the metropolis well. I came to love and admire its many communities -- including Ferguson: so tenacious, so full of hardworking families trying to stay afloat, trying to dismantle racial apartheid and make a better life for their children.

But each time I tried to write about Ferguson, I could only stare into the blank screen, dumbfounded. It wasn't the killing of Michael Brown that left me speechless: tragically, the murder of black men by police is common. It wasn't the riots that stumped me: Ferguson residents are rightfully fed up with being treated as second-class citizens. It wasn't even the ludicrous spectacle of a hyper-militarized police response. I've been following that story for years.

No, what dumbfounded me was the outpouring of white anger and resentment. As police, pundits, politicians and their supporters sought control over the narrative of events in Ferguson, they drew from the deep well of moral panic and race hatred that in many ways define our contemporary political landscape. I am not talking about the moronic counter-protests by the Klan, or the impending race war hallucinated by capital-R Racists. I am talking about the insidious language of white privilege -- the civil, polite, unconscious adoption by white people of racially normative viewpoints that give us comfort and help explain the world on our terms.

For those of us born with white skin, white privilege is the air we breathe; we don't even have to think about it. It is like the fish that never notices the water in which it swims.  It is a glorious gift we have given to ourselves through the social order we have constructed, from top to bottom and bottom to top. It is the pillage of continents, the enslavement of people, the hatred of dark-skinned "others," all somehow magically laundered by our commitments to democracy, self-reliance, individualism and the "post-racial, color-blind society." It is our abject unwillingness to confront our history, to correct the deficits of our memory, to lean against the amnesia of a white story told.

Meanwhile, white privilege is a grand protection racket. It has always paid substantial dividends, both in the short term and over generations, by restricting access to a valuable commodity -- white skin. The wage we extract from racial difference keeps us committed to its perpetuation, even if we don't know (or refuse to believe) that we are so committed. White privilege is a legacy, an inheritance, an account on which we can draw over and over and over again for any advantage, however small. It is the accumulation of racially protected, white-defended land, property, education, goods, institutions, mobility, rights and freedom. It is the ultimate head start. Rarely do we even know that we are drawing on these protected accounts, so ubiquitous and profound is the fund. Wave after wave of immigrants has had to learn this lesson, adopting white privilege and anti-black racism to fit properly into their new country.

But take away the air, and we gasp -- we don't know how to breathe in any other medium. In a paroxysm of fear and pain, we hyperventilate, clutching for a lifeline. Put millions of white people into the same scenario, and you get a great moral panic. In earlier times, the moral panic over race flowed from the raiments of a slave-based republic: the Democratic Party, the Confederacy, the Klan, sundown towns, lynchings and chain gangs. Today this moral panic is exemplified by the Tea Party, the GOP, right-wing media, gun toters at Wal-Mart and "patriots" like Cliven Bundy. And chain gangs. Race itself might have no basis in science, no purchase in differentiating humans genetically, but it is nevertheless a powerful cultural force. Race is the house of many rooms, built by white people for "the world and all those who dwell therein" (Psalms 24:1).

White privilege requires constant vigilance at the borders of identity, constant policing of difference. The frantic call among right-wing pundits to "secure the borders" by erecting walls has its psychic corollary in the maintenance of white supremacy. How could we possibly have a black president? Who are these strange people crossing our borders? How could anyone profess any other belief besides Christianity? Why do my tax dollars go to support those people (meaning dark-skinned residents of inner cities, not corporations and lobbyists and the military)? Meanwhile, we cling to the myth of the post-racial society, where suddenly, somehow we will be judged solely on the content of our character rather than the color of our skin. In this way, "not seeing race" becomes the peculiar privilege of white people who, perhaps unbeknownst to them, see race everywhere always.

White liberals try to blame "the South" or the ignorance of white working-class people for the persistence of racism. But there is plenty of ignorance to go around among white folks in all walks of life. In the 1950s, race-liberal politicians in the urban North proposed separate swimming days as a way to stave off white citizens' fears of race mixing in public pools. In the 1960s, white liberals frequently upheld Dr. King as a civil rights hero while denigrating Malcolm X and the Black Panther Party. Racism knows no class boundaries, and benefits all whites, if not equally. Indeed, it can be particularly virulent among white elites, who have long used race as a way to divide and weaken working-class people, from Carnegie's deployment of black laborers as strikebreakers to Lee Atwater's Willie Horton strategy to the Koch brothers' latest campaigns.

Pinpointing the South as the source of the problem is equally chimerical. The majority of hyper-segregated cities in the U.S. are in Northern states, and redlining and "white flight" proved as extensive in the North as in Dixie. To be sure, the Old Confederacy lingers like an undigested morsel, a failed state within our national borders, and will do so until we pull down the statues of traitors like Robert E. Lee and Nathan Bedford Forrest. Canny white politicians in the 1960s counted on race as an electoral motivator to take over the Republican Party via the so-called Southern Strategy. But the power of anti-black racism is not and never has been relegated to one region of the country -- after all, great race-baiters like Nixon, Goldwater and Reagan hailed from Western states, while the South produced its share of courageous politicians.

Today's GOP is the party of angry white men, not of the South. And racism is not confined to the GOP, however expert the party has become at exploiting race as an electoral dynamo. Rather, racism has long comprised a core pillar of the republic -- as close as anything to the beating heart of our body politic.

In many ways, white privilege is more insidious than white supremacy. Both depend at root on the white power structure, but draw from that well in different ways. Advocates of white supremacy make no bones about their views, and approach the world with a modicum of clarity as to where they stand. They constitute the corporate lobby for whiteness as a racial political and economic interest. White privilege, on the other hand, rests on an edifice of special stupidity -- a passive condition that literally stupefies the subject, inuring him or her against critical insight. It enables white people to assume the mantle of "color blindness" so as to perform the perfect legerdemain: making claims that do not seem to be explicitly about race, but are in fact about little else.

Thus, white privilege need not be overtly racist, and in fact is most potent when expressed through coded language cleansed of racial terms. It comes out into the world in phrases that seem reasonable to us white folk, but that obscure the immense freight of racism they carry -- phrases like: "I'm not racist, but"; "my ancestors didn't own slaves so I am not responsible"; "I didn't get any breaks, I worked for everything I have"; and "what are they complaining about, things are so much better now." Instead of "black neighborhood," we say "high crime," "dangerous" or "investment risk." Instead of young black male, we say "thug" and "gangster." White privilege leads us to repeat nostrums like "hey, Africans had slaves too"; "Republicans aren't racists because the Democrats were the party of slavery"; and "what about black-on-black crime." Such phrases are so utterly denuded of historical context as to be meaningless, yet they are repeated ad nauseam by right-wing bloggers and pundits.

White privilege enables us to pontificate on, and justify, the murder by police of black men who wear hoodies, smoke pot, sell "loosies," shoplift or resist arrest. It enables us to ignore (or not even be capable of seeing) the glaring contradictions and double-standards that pervade the criminal justice system, from arrest to prosecution to sentencing -- and even to media reporting on crime. White cokeheads get a slap on the wrist and some community service, while black crack users do 20 years at Joliet. George Zimmerman was standing his ground when he killed a black minor, while Marissa Alexander's three warning shots against her abuser got her 20 years. White shoplifters after Hurricane Katrina are "survivors," while black shoplifters are "looters." White men who resist arrest typically get tackled or tasered. Black men resist arrest at their ultimate peril. Such double standards wrap white privilege in the comforting cloak of civility and reason, or what passes as such in our current non-conversation on race.

Still, at the deepest level, white privilege is an excruciatingly laborious fiction to uphold. It is exhausting, a heavy psychic penalty, a debenture drawn off the scales of justice. It makes us neurotic, fearful, angry, depressed and mean. It requires us to fully absorb the phantasm of race and to map moral and economic worth across gradations of skin color. Of course, black people suffer orders of magnitude greater trauma, physical pain and mental torment under the sign of white power. Nevertheless, it is the sickness at the heart of our body politic, and it floods our personal and social relations with an anxious bile. We white folk don't know the source of this angst because we can't see it. Most black people have no difficulty seeing it; whiteness envelops our bodies in a haze, and privilege flows from our lips like bitter honey.

In the end, I am convinced that white privilege blinds white people to our real interests, separates us from our best allies, and denies us grander aspirations. It hollows out life and hinders love. Most important, it victimizes people of color and forecloses opportunities for a greater common good. The fire this time is small. Some day it might burn large and bright -- a hundred Fergusons, or a thousand. There is only so much give in our social fabric. People need to be heard, one way or another. It is time to reckon our privileges and to listen, to unplug from the Matrix of white supremacy. Time to breathe a different air.