Colbert returned from his two-week vacation last night to weigh in on the events in Ferguson, Missouri. 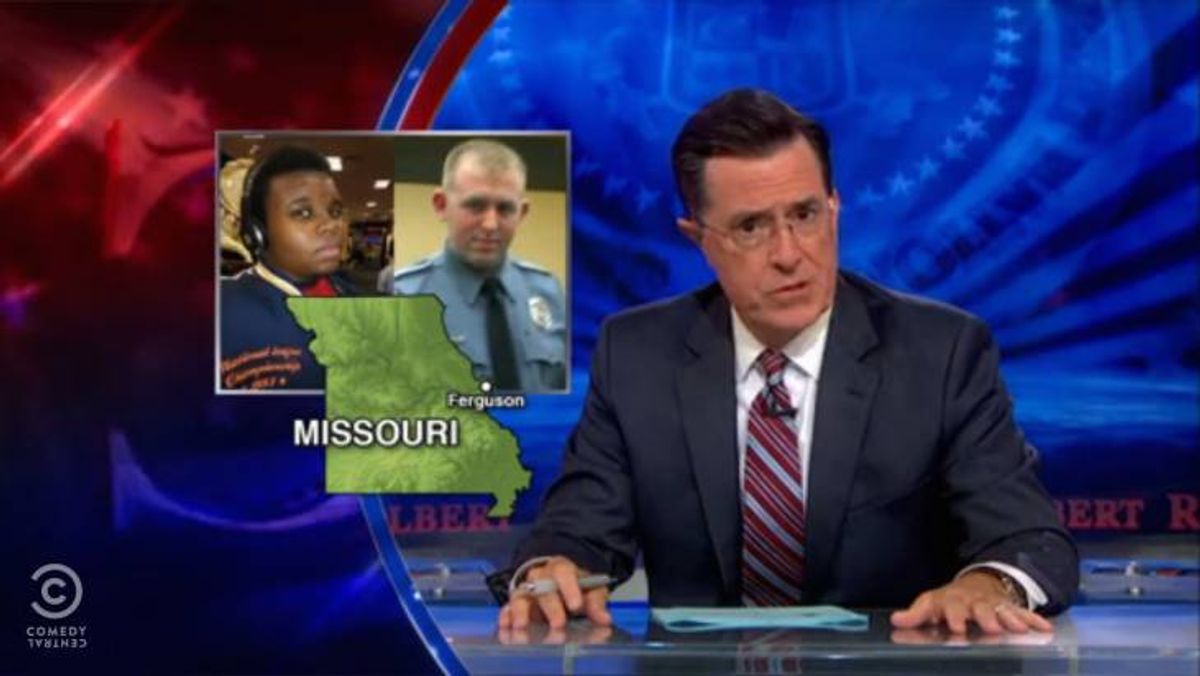 Stephen Colbert returned from his two-week vacation last night only to find that the national reputation for Ferguson, Missouri, had radically changed since he had left: "Sadly, Ferguson, Missouri, is now best known for racial conflict, police brutality and violence in the street," he said. "Not, as they proclaim proudly on the official city website, for 'Food Truck Mondays.'"

Obviously, Colbert stuck to his manufactured persona and brilliantly defended and condemned Darren Wilson, the officer responsible for fatally shooting unarmed teenager Michael Brown. "This is a genuine tragedy that many are saying is the foul harvest of our racist past," he said. "But I urge everyone to wait to pass judgment on Officer Darren Wilson. Some are rushing to judge this man as a violent, racist cop who gunned down an unarmed black teenager. But others are arguing that he's a heroic police officer doing his job -- by gunning down an unarmed black teenager."

"But we don't know if this was racist, or even if racism still exists," he continued. "I for one don't see race -- not even my own. People tell me I'm white and I believe them, because I keep asking my waiters about gluten."

Colbert then cut to several clips of Fox News decrying the media's coverage of events in Ferguson, including one of Howard Kurtz who says, "I wrote a column for Fox this week saying, theoretically floating the idea, what if all the journalists in this Missouri town just packed up their equipment and left? Would that have had an impact on the violence? A lot of people responded and said, 'Yes.'"

"'Yes,' I respond!" said Colbert. "It's true. The presence of a camera clearly makes people behave recklessly because I don't believe for a minute that Howie Kurtz would have floated the idea that journalists are to blame for the Ferguson violence if a camera wasn't pointed at him."