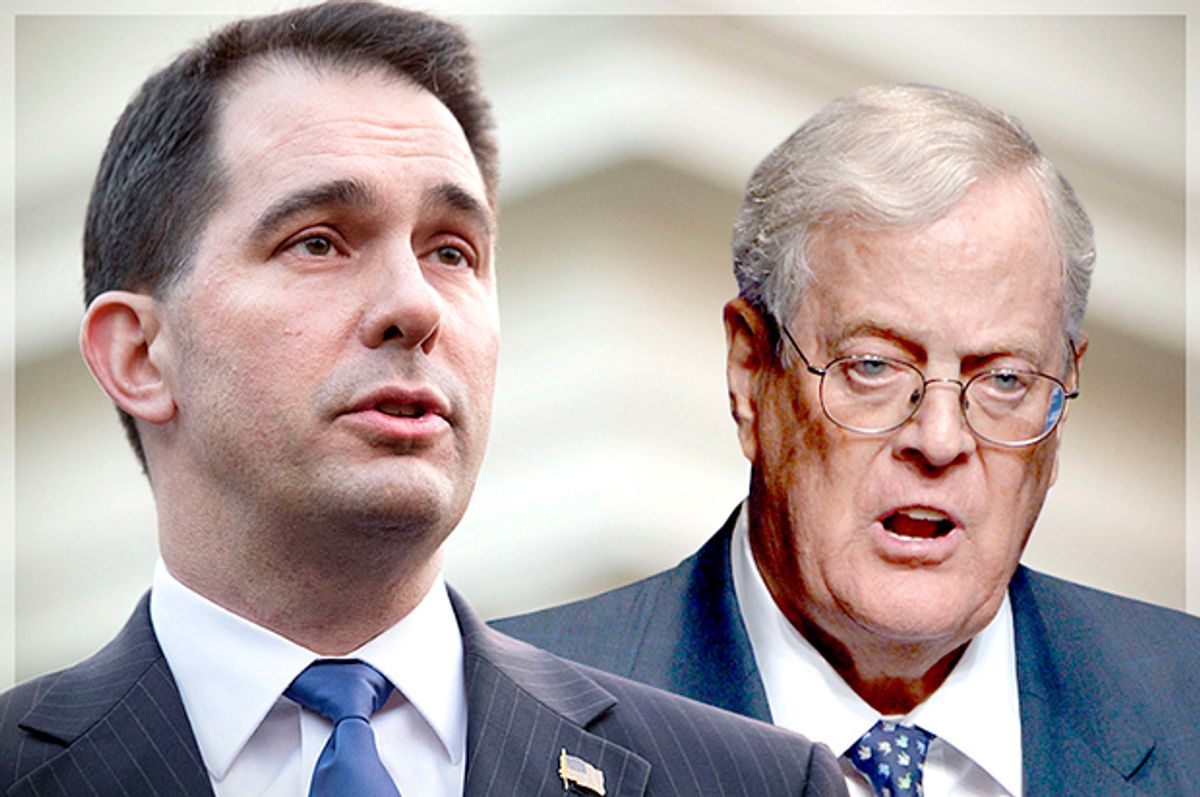 Back when Senate Majority Leader Harry Reid began publicly attacking the Koch brothers and their right-wing political empire, a lot of the media treated it as a desperate and maybe unseemly attack on “a couple of relatively unknown private citizens,” in the words of Politico, by a guy who saw Senate control slipping from his hands in 2014.

But the more we learn about Charles and David Koch’s sway with top Republican leaders, thanks to embarrassing leaks from their June retreat, the clearer it is that attacks by Reid and other Democrats are justified and proportionate.

Also clear: Wisconsin is ground zero in the battle over whether the Kochs’ vision of a low-tax, union-free neo-feudalism prevails, and Gov. Scott Walker is a wholly owned Koch subsidiary.

On Wednesday we heard Senate Minority Leader Mitch McConnell thank the Kochs “for the important work you’re doing,” adding, “I don’t know where we’d be without you.” Then he promised to shut down the government again to force spending and regulatory cuts – clearly Reid was right when he said last year’s shutdown was on the Kochs -- and block action on the minimum wage, extended unemployment insurance and the student loan crisis.

On Thursday in the Huffington Post we learned that Republican Governors Association director Phil Cox told the Kochs and their friends that he has “no stronger partner” than the Koch-funded Americans for Prosperity. And nowhere has that partnership paid more dividends than in Wisconsin.

Not only did the Kochs’ investment in Walker pay off on Election Day 2010 and in his 2011 recall, Cox assured his patrons, it resulted in the achievement of one of their dearest goals: a decline in public sector union membership.

Here’s what Cox told the Kochs and their wealthy allies:

In Wisconsin, because of your support, the 2012 recall, uh, the, the story is very clear. Governor Walker’s reforms are working…And a statistic I think you’ll all care about, given how heavily involved AFP and other groups were in the recall: since the collective bargaining reforms were in place, teachers’ union membership in Wisconsin is down (inaudible) percent. [Local news reports put that figure at 30 to 60 percent.]

In Wisconsin, it was a really tough battle in 2012. AFP was a tremendous partner. And it’s still a very polarized electorate there. Um, Walker’s (inaudible) is pretty high, probably 47-48, but he’s handling it pretty well, and I don’t see him probably getting beyond 54 or 55. So it’s going to be a state we’re heavily engaged in.

The RGA has already put $18 million in Walker over the last four years. We’re not going to let up now. We put $2 million in this spring. Uh, AFP has been on the air. Walker’s been on the air, and the governor currently leads by six points. This is a race we’re going to have to be engaged in right on until the end.

In fact, a Marquette University poll released Wednesday showed that Walker is currently trailing Democrat Mary Burke among likely voters, so AFP and the RGA have a lot more work to do. But clearly, they’re up for it.

Cox’s remarks about AFP’s role in Walker’s recall campaign should also serve to remind us of the slow-motion political disaster unfolding for the Wisconsin governor, as prosecutors release more details about why they believe that campaign illegally colluded with outside groups, including the AFP and the Club for Growth. Prosecutors have said that Walker isn’t personally a target of the probe, which was shut down by a local Republican judge, a decision the prosecutors are appealing.

As the Milwaukee Journal-Sentinel summarized the new revelations:

The records include example after example of Walker or his aides encouraging donors to give money to the Wisconsin Club for Growth.

In September 2011, Doner sent an email to Walker and others with brainstorming ideas for raising money for the Wisconsin Club for Growth. Among them: "Take Koch's money," "Get on a plane to Vegas and sit down with Sheldon Adelson," and "Go heavy after (corporations) to give."

Thanks to Cox, we have an even better picture of the extent to which Walker and the Republican Governors Association collaborated with the Kochs. It may all be legal, but it may finally backfire in Wisconsin, as voters realize their governor is a wholly owned Koch subsidiary. Scott Walker is in trouble, and it may turn out that AFP wasn’t such a “tremendous partner” after all.