There used to be whiskey and drivers. Now, Josh Weil and Mike Harvkey learn amusingly, there's a Prius 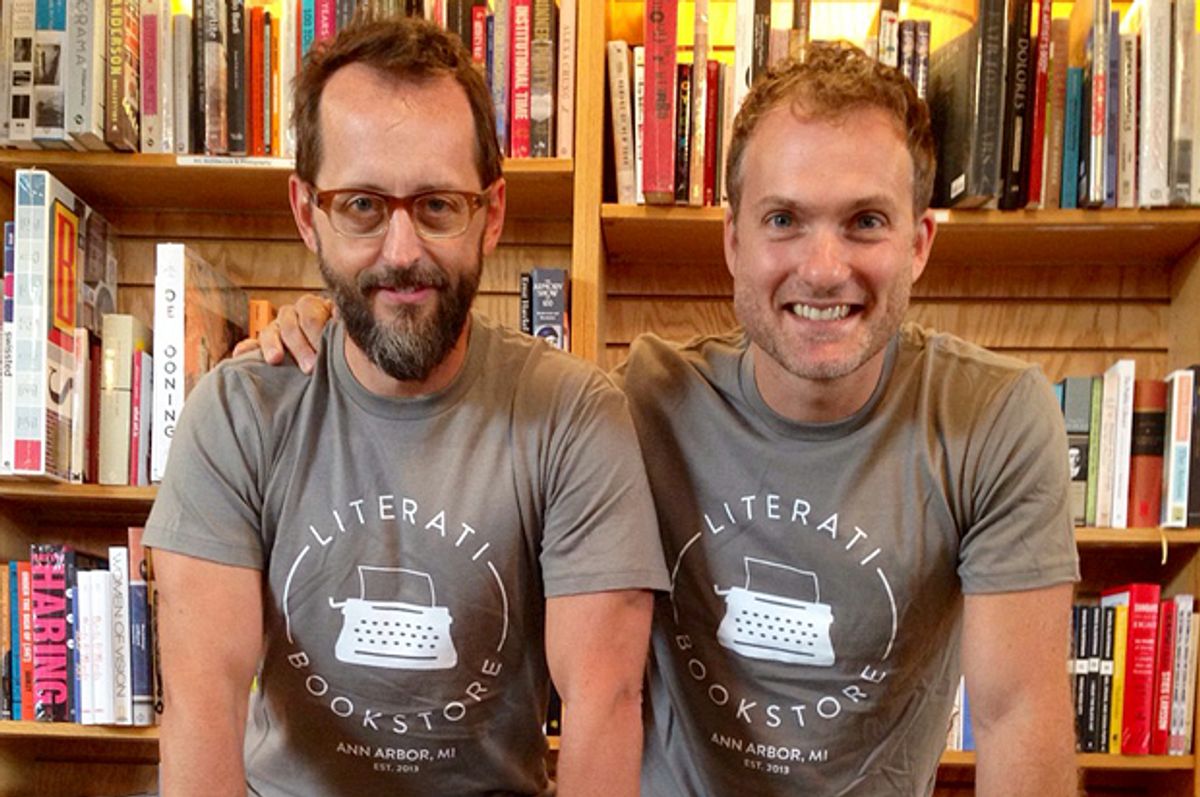 Josh Weil and Mike Harvkey are on book tour with two acclaimed new novels. Their dispatches from the road begin here. In the memoir "Townie," Andre Dubus III writes of his writer dad, an illusive figure who, for us — listening to tale after tale as we close in on Iowa City, where so many of them are set — has become a constant reminder of a kind of writer who once existed in an era of publishing that seems long gone. Dubus senior fathered children he rarely saw, left his wife for his student, partied hard and often amid much cigarette smoke and many emptied bottles and writers talking late and loud into the night. Hell, this was in a time when writers like Norman Mailer and Rip Torn came to blows, in a field, took each other down on the ground.  Maybe it was a stunt, but, man, those guys  ripped each other’s shirts off. And us?  The other day we ducked into a bathroom to change.  Together.  Into matching shirts.

Between the first three stops on this tour — Literati Books in Ann Arbor, Book Bug in Kalamazoo, and City Lit in Chicago — we have gathered again and again with local writers and booksellers and today’s literary folk. They have graciously folded us into their own communities. None of us smoked. We sipped our drinks. When we ordered the burger, we split it. We shared the fries.  And the talk?  A lot of it is about books, of course, but a lot of it is also about kids.  Having kids, raising kids, wanting more kids. During our reading at Kalamazoo’s Book Bug, which began as a children’s bookstore and still feels like a safe place for kids, both of us apologized for the curse words we read. Josh repeated the same one thrice; Mike rattled off something of a medley. As a tribute to Mike’s book, Book Bug’s wonderful owners, Joanna and Derek, did their best to make us feel like the superstars of yesteryears.  They even procured a bottle of Rebel Yell, which makes many an appearance in the novel. We poured a fingerful into each cup.  OK, maybe half a fingerful.  We must report that by the time we left we’d barely made a dent in the bottle (in the book, not one but two bottles are emptied the same night). We can also report that the berry tart was delicious.

By 9 we were out the door into a night so hot it would leave us breathless and sweating.  By which we mean it was really, really humid.  In the Prius, we cranked the AC — whew! — and followed our friend to her nice new house in one of Kalamazoo’s nice suburban neighborhoods. All of us were wiped out. It had been a long day! We turned in early.  Of course, our host had an excuse: She was so pregnant she might have given birth that very night.  Us?  We were just being writers, doing what writers seem to do — put up a last post on Facebook, call our wives to wish them goodnight — on tour today.

Maybe we just have a hopelessly nostalgic view of the way things used to be. We’re both suckers for that softening lens. But as we stopped in a gas station one night to grab a little decaf (when Mike reached for something stronger, Josh raised his eyebrows, said, “You sure you want to do that so close to bedtime?”), or, buying a few beers to bring as a gift to our Chicago hosts, kidded each other about the display of travel-size liquor bottles — “One for the road?” Mike said — our chuckles dwindled away to an awkward silence and we couldn’t help wondering if maybe writers should occasionally come to blows. Once, the Windy City’s own Irvine Welsh told Mike in an interview that he didn’t like this MFA trend, these factories spitting out media-savvy writers who, if they’ve had any life experience that has given them anything to say are dissuaded by their publishers from saying it. In his words, to be a good writer, you’ve got to be “a bit of a waster.” Driven less to succeed in publishing (or on Twitter) and more to succeed in learning something about what makes people tick.

But that’s a bygone era. Writers don’t fight much anymore. Few pregnant women still smoke. The three-martini lunch is mostly dead, and maybe that’s not such a bad thing. The white male badass has given way to a new image of the writer: as a woman, an immigrant, a person of color, people whose voices were ignored for most of modern history.  We’re more likely to be found visiting classrooms than bars (and less likely to confuse the two).  When we stop at a campus we’re expected to teach a good workshop, not to be good in bed (though, honestly, we’re getting pretty good at sharing a hotel rooms: Mike shuts the light off early to let Josh go to sleep; Josh sneaks out in the morning so he doesn’t wake Mike with typing; “G’night, bud,” we say, sweetly, each night, switching off the lamp). A while ago, Josh was talking with a writer who had lived the other way, toured at the tail end of that earlier era, and this writer had shaken his head at how it had been.  “We knew it wasn’t working,” he’d said, “couldn’t work.” The expensive hotel rooms, the spendy dinners.  The readings where, even back then, book sales rarely came close to covering the cost. The ever-shrinking sales.  The publishing houses pretending it all wouldn’t have to come to an end. “When it did,” this writer said, “we felt a little bad about it.” But what writer was going to refuse to accept the free drink, the fancy hotel suite, the last vestiges of a way of life everyone knew would soon be gone?

Now, maybe we would.  When Josh’s publisher offered to cover the cost of a last-minute flight, he searched the Internet for the cheapest deal in the hope of saving a few bucks in the budget to go a little further toward something else. When Mike decided to take this trip across the country, it was on his own dime.  All to help our books, our publishers, the booksellers who are kind enough to host us as they try to stay afloat.  These days, we wouldn’t feel right taking what we knew a publisher couldn’t afford.  When booksellers do take us out to dinner, we order something inexpensive.  We help each other out.  Because — at least for writers and publishers and sellers of literary fiction, with readership ever dwindling, and Amazon ever growing, and profits increasingly uncertain — the books we care about, that we want to bring to the wider world, won’t make it without help from all of us working together.

Of course, though that’s true of most of the writers we know, true about our books, maybe there are other writers out there who are still badasses on the road.  After all, Rachel Kushner drives a killer car (a 1964 Ford Galaxie 500).  Benjamin Percy can slug a shot (and growl) with the best.  For all we know, when Donna Tartt stays at a hotel she smashes guitars against the walls of her suite.  Next time our publishers put us up in the penthouse, we’ll check for signs of damage.