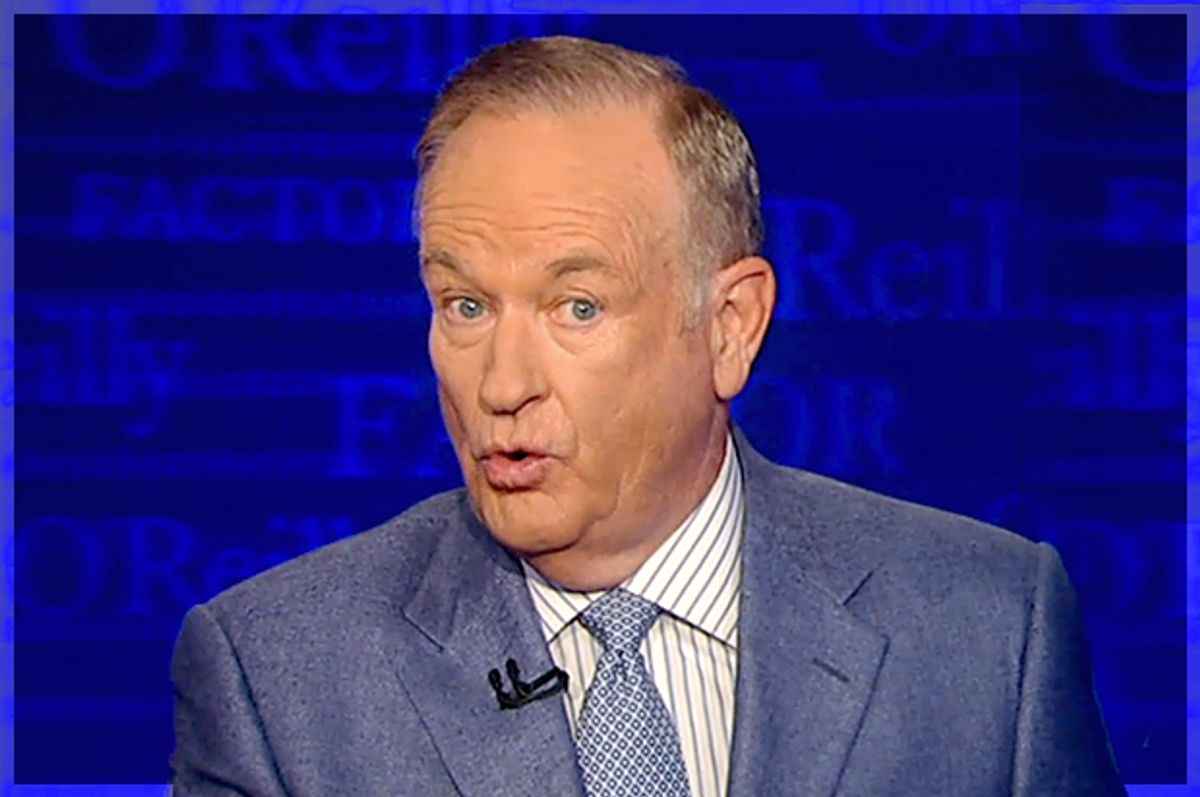 Poor Bill O'Reilly. I'm starting to suspect he never leaves his Fox News studio, preferring to remain alone in his echo chamber instead of going out and interacting with actual people, all the better to retain his intellectual purity, untainted by reality. The idea that white people benefit from "white privilege" annoys the hell out of him. How can people be so dumb? He tells us, with emphasis, he "does not, does not believe in white privilege."

However, one doesn't have to believe in gravity for it to exist. Even Fox News anchor Megyn Kelly won't join him in his flat-earth theory.

"It's got a lot of evidence behind it," she replied when she was on as a guest this week.  She refreshingly let her brain out from the bushel it's been hiding under, bombarding Papa Bear with statistics and facts on the structural inequalities that create astounding obstacles to success -- or even minimal solvency -- that African-Americans in places like Ferguson, Missouri, face.

O'Reilly was humiliated at every turn by the well-prepared Kelly. Like the vulture that vomits up its rotting carrion when spooked, O'Reilly had to reach down  and pull out the oldest, moldiest racial canard in the book: the Model Minority! "The Asian American community is not a troubled situation," he protested. Blacks just need to study harder, obviously.

By the next day, Papa Bear wasn't content with simply recycling an old canard, he had to supersize it, asking, "So do we have Asian American privilege in America?"

But instead of wasting time parsing O'Reilly's cherry-picked statistics, one just needs to ask, if Asian Americans have so much privilege, then why isn't Congress majority Asian American? Why aren't most of our CEOs and hedge funders Asian American? Why isn't the American theocracy headed by Buddha, not Jesus?

I invite Bill O'Reilly, my favorite ahistorian, to examine the case of Vincent Chin, a young man who was murdered in Detroit in 1982 via bludgeoning with a baseball bat by two out-of-work autoworkers who blamed the Japanese for their unemployment. These two white men chose to kill an American man, of Chinese descent, one whose father was a World War II veteran. And who was out enjoying a night on the town on the eve of his wedding.

"These weren't the kind of men you send to jail," the judge said.

Or, in 2006 in St. Paul, Minnesota, Koua Fong Lee was driving his family home from church and his Toyota Camry accelerated seemingly on its own, speeding up a highway off-ramp and hitting a car stopped at a light, killing three people inside it.

Two years earlier,  125 Toyota drivers had filed complaints about crashes involving Toyotas and "speed control," and Mr. Lee -- in the car with his pregnant wife, 8-year-old daughter, his brother and father -- had shouted at the time of the accident that the car was speeding and the brakes weren't working. But instead of his story becoming part of the alarm over Toyota vehicles, one  that could have led to earlier recalls and saved lives, Lee was convicted of criminal vehicular homicide and sent to prison.

He was in his fourth year of  an eight-year sentence when the Toyota sudden-acceleration scandal became too large to ignore (millions of recalled vehicles, allegations of a decade-long coverup), and he was freed. One cannot tease out exact amounts that race played a part, but the facts are, two white people who murder an Asian American man received zero jail time, while an Asian American man involved in a car accident went to prison for homicide. I'm trying to imagine what Lee's scenario would have looked like to a jury if it had been a white family driving home from church, no Asian driver stereotypes. "Tragic accident" comes to mind.

"Asian American privilege" is basically another cover for white privilege, a false equivalence; it's the distraction of the pickpocket who waves at you with one hand while quietly emptying your pockets with the other (and then blaming it on a black person).  This privilege also works in "soft" ways mostly invisible to the society at large but that on an individual level can create lifelong obstacles for one group while unfairly smoothing the way for another. My friend Evelyn, a distinguished professor at Brown, came to America from Hong Kong as a child, spending much of her time taking care of her siblings while her mother cleaned houses. After three years of high school, she was admitted to Stanford, but as a probationary student because of her low verbal SAT scores, 611. However, she noted, that same year, a white person with even lower language scores despite being a native speaker, was admitted to Yale under "white affirmative action," i.e., as a third-generation Yalie: George W. Bush, who went on to become president despite some "youthful indiscretions" -- including theft and substance abuse -- that he could laugh off but that likely would lead to prison (and subsequent difficulty finding employment) for a youth in Ferguson.

O'Reilly loves to talk about Asian Americans' "emphasis on education" in contrast to African-Americans who "have little chance to succeed in the free marketplace because they are uneducated." But the American educational system is hardly a dispassionate meritocracy that takes the best of the best, irrespective of race. Curtis Chin is a filmmaker finishing up a documentary, "Tested," which explores the age-old entrance exam used for admittance to New York City's competitive public high schools -- an exam that is now being reexamined given the dominance of Asian Americans in schools like Stuyvesant and Bronx Science. He pointed me to a study that showed that in polls, whites are supportive of quantitative-test-only admissions but change their minds when they find out it means advantaging Asian Americans. Basically, white people say they want a level playing field. But once Asian Americans start to beat the whites, it's time for a new field. This isn't about meritocracy, it's about being the group in power and manipulating the rules to remain in power, revealing how  "Asian American privilege" is merely white privilege's straw man.  A compare and contrast that hurts all ethnic groups.

This was one of the few things in O'Reilly's segment that I agreed with -- because, at first, I thought by "race hustlers," he was referring to people like college-dropout, four-times-married drug addict Rush Limbaugh who famously used "ching-chong" language to describe the speech of the Chinese President Hu  Jintao. Or maybe Joe Walsh, the Tea Party congressman who had to be sued to pay child support while making a public list of all the dysfunctions he believes are endemic to black families. (For palate cleansing, please read Ishmael Reed's excellent, "Why We’re Shocked by White Heroin Use" in the Nation.)

But it turns out O'Reilly defines "race hustlers" as people who annoyingly continue to  acknowledge that white privilege exists even as he keeps telling them it doesn't.

"American children must learn not only academics but also civil behavior, right from wrong ... If African-American children do not learn these things, they will likely fail as adults. They will be poor." In his world, O'Reilly has become wealthy because he is "good," and not because he cynically peddles hateful invective and false outrage carefully targeted to appeal to an easily aroused segment of the TV-watching and book-buying public.

Privilege builds wealth builds more privilege builds more wealth -- and it's a good thing, because O'Reilly needs his money. Even though he purportedly knows the difference between right and wrong, he seems to not know the difference between a falafel and a loofah, which he reportedly used interchangeably as he fantasized a shower scene, as alleged by a former producer in her sexual harassment suit (complete with audiotapes), for which married-with-kids O'Reilly settled for an undisclosed, undoubtedly large, amount.

That's not privilege, I can already hear him thinking. That's just good business.