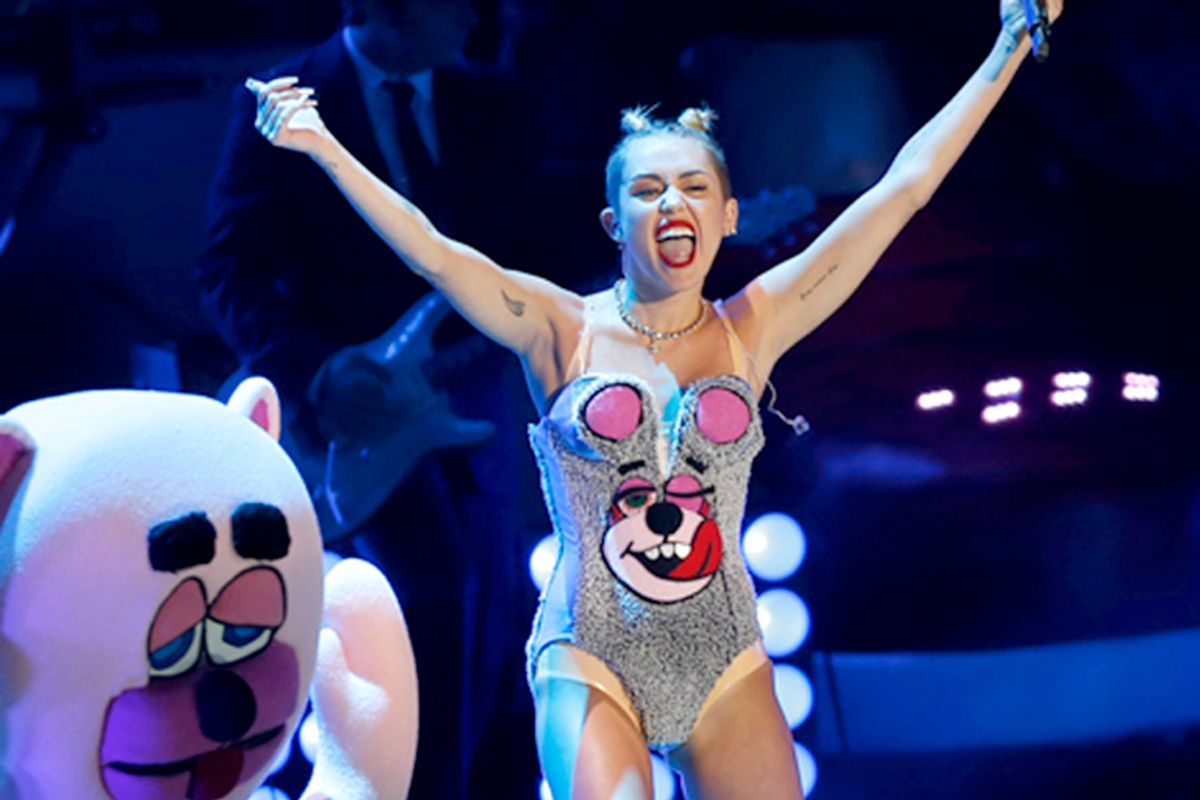 As anyone familiar with the Christian right can attest, there are a great many sayings Christians spout that are less charitable than it would seem. “I’ll pray for you” is a passive-aggressive way to tell someone to shove off. “It’s in the Lord’s hands” means that the speaker cannot be bothered to actually do something about a problem. And “we’re doing this for the children” means that adults and teenagers are doing something the Christian conservative thinks is ungodly, and children will be invoked to excuse attempts to control the choices of older people.

Take, for instance, the annual rite of the media watchdog organization Parents Television Council complaining about the MTV Video Music Awards. No one in the real world mistakes the VMAs for Sesame Street. The show starts at 8pm and doesn’t really get going until later. To make absolutely sure, the show is rated TV-14. Despite the many signposts alerting parents to the fact that this isn’t programming for the little ones, PTC always finds a way to use hand-wringing about the children to demand more censorship of the VMAs.

PTC seems like a very retro organization these days, still hammering on about what’s on TV when everyone has immediate access to whatever entertainment they want through the Internet. But the organization matters, not just because it is symptomatic of the larger tendency on the right to use “the children” as cover for attacks on the choices of older people, but because they are still the biggest organization out there setting the agenda for what kind of media conservatives are going to hold out as evil. You know, because of the children.

And while PTC might not be very successful at getting stuff off TV, it and its proxies in the media are extremely good at spreading the myth that our culture is oversexed, especially to conservative audiences. That, in turn, leads to attacks on sex education, Planned Parenthood, and activists like Sandra Fluke who want insurance to cover birth control—anyone who is perceived as aiding this supposed over-sexualization.

Because conservative “watchdog” groups, with PTC leading the pack, set this agenda for the right, it’s no surprise that Fox News has picked up on PTC’s obsession with the evils of dancing and the VMAs in particular, such as Bill O’Reilly railing on for multiple nights on Fox News about the supposed threat to girls that the VMAs present and Fox News using the awards show to forward attacks on “modern feminism.” Sexy dancing is available to anyone’s eyeballs whenever they want to see it, but because PTC obsesses over the VMAs, so must Fox News.

Screaming about the supposed effect of the VMAs on children is such a big deal for the PTC that it released pre- and post-VMAs statement. The pre-statement was a threat, which really calls into question what kind of lessons PTC thinks are appropriate to teach small children. “The 2013 VMAs were a public relations kerfuffle for your network that I feel certain you will not wish to repeat,” it warned ominously, even though there is no evidence that the Miley Cyrus performance it referenced did much beyond garner more attention for Cyrus’ burgeoning career.

PTC demanded a TV-MA rating for the show, even though it has no nudity and never anything more ribald than dancing. The TV-14 rating, according to the PTC, “was simply unacceptable to the families who depend on the television ratings system to be applied accurately and to the millions of families whose children are marketed to by MTV.”

The PTC was founded in the '90s by Christian right activist Brent Bozell, and for most of its life, it didn’t bother to hide that it was an organization rooted in Christian right ideals. It’s beenundergoing a makeover to appear more as a secular organization in recent years, hiring Tim Winter, a registered Democrat, to take over from Bozell in 2007. Under Winter’s direction, PTC has made a few moves to actually try to be a bit more convincing when it comes to the claim that they’re in this for the children, including creating a division of its website that takes a stab at pushing for better role models for girls in media.

But looking over the PTC blog, it becomes clear that it's just the same old reactionary organization that exists mainly to complain about sex and profanity on-air, even in situations where broadcasters have reasonable expectations that small children won’t be watching the shows.

For instance, Winter, whose legal party affiliation as a Democrat hasn’t stopped him from writing for Christian right organizations like One News Now, wrote a piece in early August denouncing McDonald’s advertising. He wasn’t concerned about the rising rates of childhood obesity or the way that McDonald’s targets children directly for manipulative advertising of incredibly unhealthy food. That’s for people who actually give a crap about children.

No, Winter is mad that McDonald’s advertised on a silly VH1 show called Dating Naked. “The juxtaposition of this historically family brand with such sexually graphic content is shocking,” he argues, even though the nudity on the show is obscured through pixilation and the contestants aren’t engaged in any more sexual behavior than on any other dating show. So McDonald’s can continue to use clowns and toys to encourage kids to eat all the grease and sugar they can stomach, but god forbid a dating show that admits people are naked under their clothes.

Even though bumping and grinding has been part of pop music since roughly forever, PTC has a special obsession with being angry at Miley Cyrus for engaging in the usual pop musician antics. “ America Wants More “Sound of Music” – Less “Bangerz” reads one headline where the PTC bloggers unintentionally parody their own religious right obsession with eradicating any acknowledgement of sex from the entertainment industry.

Cyrus gets singled out because she had the temerity to change from a squeaky clean child star to a more mainstream, risqué pop performer. In other words, she grew up. “Miley Cyrus built her career on the backs of teens, ‘tweens’ and their parents. But the content of her Bangerz Tour is wildly inappropriate for children and families, and NBC knows it,” Winter complained on the blog.

Even though Cyrus is now a grown woman, she is obligated to continue acting like she is a child. No big surprise there, as PTC’s entire existence is predicated on using children as a cover story for what they really want, which is an entertainment industry that treats grown adults like we are children.