The right's "tyranny" paranoia: Why climate deniers are so afraid of Obama now

After a month of calling Obama a lazy checked-out president, conservatives are now angry that he's doing things 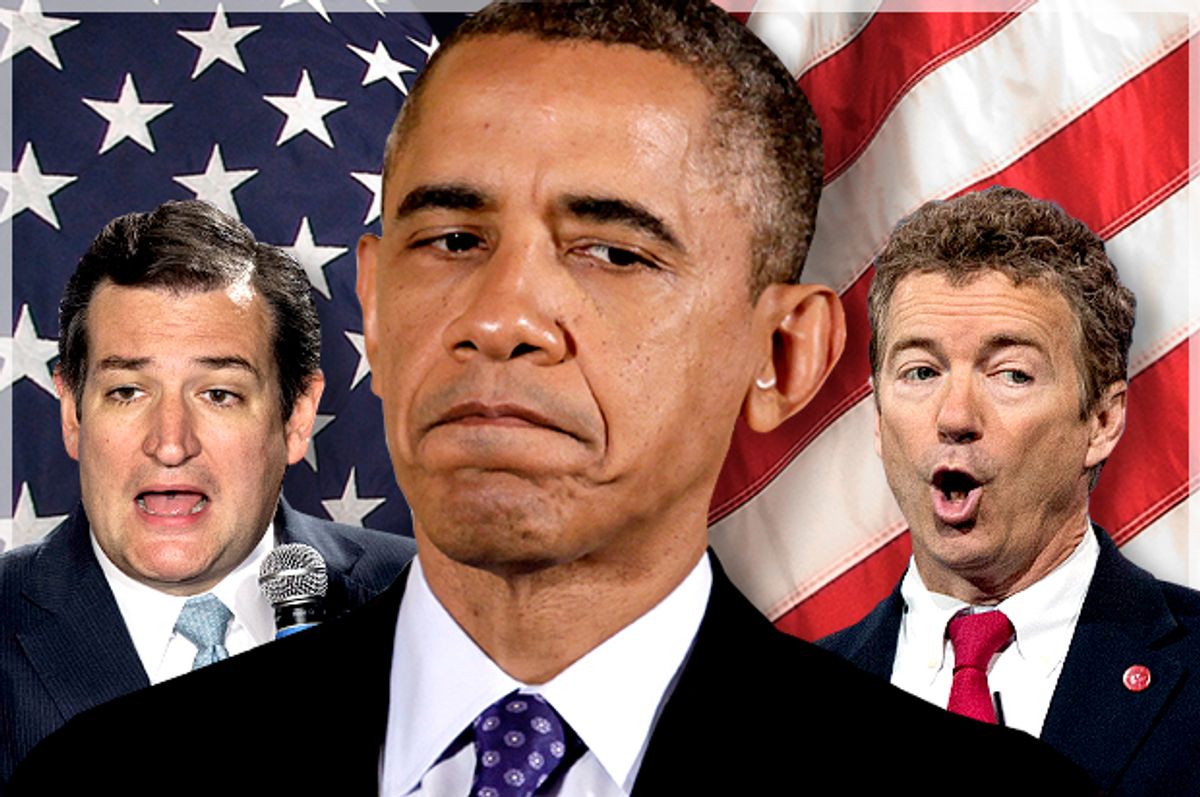 One of the hallmarks of conservative commentary over the past few years has been the impressive ability of right-wing pundits to adhere to several different and contradictory caricatures of President Obama without suffering the slightest hint of cognitive dissonance.

To the conservative mind, the president can be, depending on the situation, a bumbling dupe who is completely outmatched by the demands of the office (see: any foreign policy issue), or he can be a brilliantly devious schemer who delicately manipulates the machinery of government to achieve his nefarious ends (see: the IRS scandal). He can be a bloodless monster who will sacrifice lives to protect himself politically (see: Benghazi), or an overly sensitive softie (see: this stupid column).

If you’ve been paying attention to some of the commentary over the past month or so, you’ve probably hit upon another caricature: Obama the checked-out, disengaged pseudo-president who does nothing but vacation and play golf “while the world burns.” Late last month, the Daily Caller’s Matt Lewis wrote a column arguing that Obama “seems to be prematurely packing his bags in hopes for an early departure.” Fox News even conducted a poll asking respondents: “Do you think Barack Obama wants to be president anymore?” (Forty-one percent said “no.”)

Well, Obama’s vacation has come to an end, and he’s transitioned from a golf-crazy layabout who doesn’t even want to preside over the nation into a tyrannical pseudo-king who is ramming his socialist policies down the national gullet.

The socialist tyranny in question is “a sweeping international climate change agreement to compel nations to cut their planet-warming fossil fuel emissions,” as reported by the New York Times. Conservatives, who tend to believe that climate change is a scam and international cooperation undermines “American Exceptionalism,” lost their minds. “Obama’s Lawless, Heartless Climate Treaty” was the headline at Commentary. “Obama’s new power grab: A climate change treaty without Senate ratification,” screamed Hot Air.

The accusations of “lawlessness” come from the novel approach the administration has to take in order to make progress on climate policy independently of Republicans in Congress. When it comes to slowing or reversing the impact of climate change, nothing can be done without the United States taking the lead role. The entire world realizes this, but, according to the Times, they also know that the U.S. will never ratify any sort of binding treaty on climate change because doing so would require a supermajority of the U.S. Senate, where there are more than enough Republicans to make sure that never happens:

“There’s a strong understanding of the difficulties of the U.S. situation, and a willingness to work with the U.S. to get out of this impasse,” said Laurence Tubania, the French ambassador for climate change to the United Nations. “There is an implicit understanding that this not require ratification by the Senate.”

So congratulations, Senate Republicans: The planet-destroying obstructionism you practice out of obeisance to the petroleum industry is the stuff of global renown.

The argument that Obama’s climate agreement is “lawless” isn’t quite accurate. Per the Times, the plan is to update an existing treaty from 1992 and secure “voluntary pledges” from other nations, thus (in the White House’s view) obviating the need for Senate action. And as Newsweek explains, there is actually a heretofore unutilized section of the Clean Air Act that allows the U.S. to enter into precisely such agreements, and without the approval of Congress.

But, as Steve Benen points out, U.S. participation in any such agreement would be dependent entirely upon who is sitting in the Oval Office. “The obvious policy downside – aside from all the congressional complaining – is that a long-term climate policy would no doubt be undone the next time there’s a Republican president in the White House.” And there’s no guarantee that an agreement of any kind will coalesce, as this is all still very much in the preliminary phase.

The people who insist upon calling this a “power grab” are actually missing the point; this is the administration opting for weaker policy options because the problem is too important to leave unresolved, and something is better than nothing. “Such an accord would likely fall short of the deep emissions cuts needed to stave off the planet's warming by more than 3.6 degrees Fahrenheit (2 degrees Celsius) over pre-industrial levels — the ceiling that world leaders agreed to in Copenhagen in 2009,” writes Rebecca Leber at the New Republic. To craft any sort of policy with teeth, the Republicans would have to reverse course on climate change and become constructive agents of governance. And that’s just not going to happen.

But, for the person who thinks that Obama does nothing “while the world burns,” here he is doing something to address the actual increase in temperature of the actual world.