There's a reason why they left us in limbo 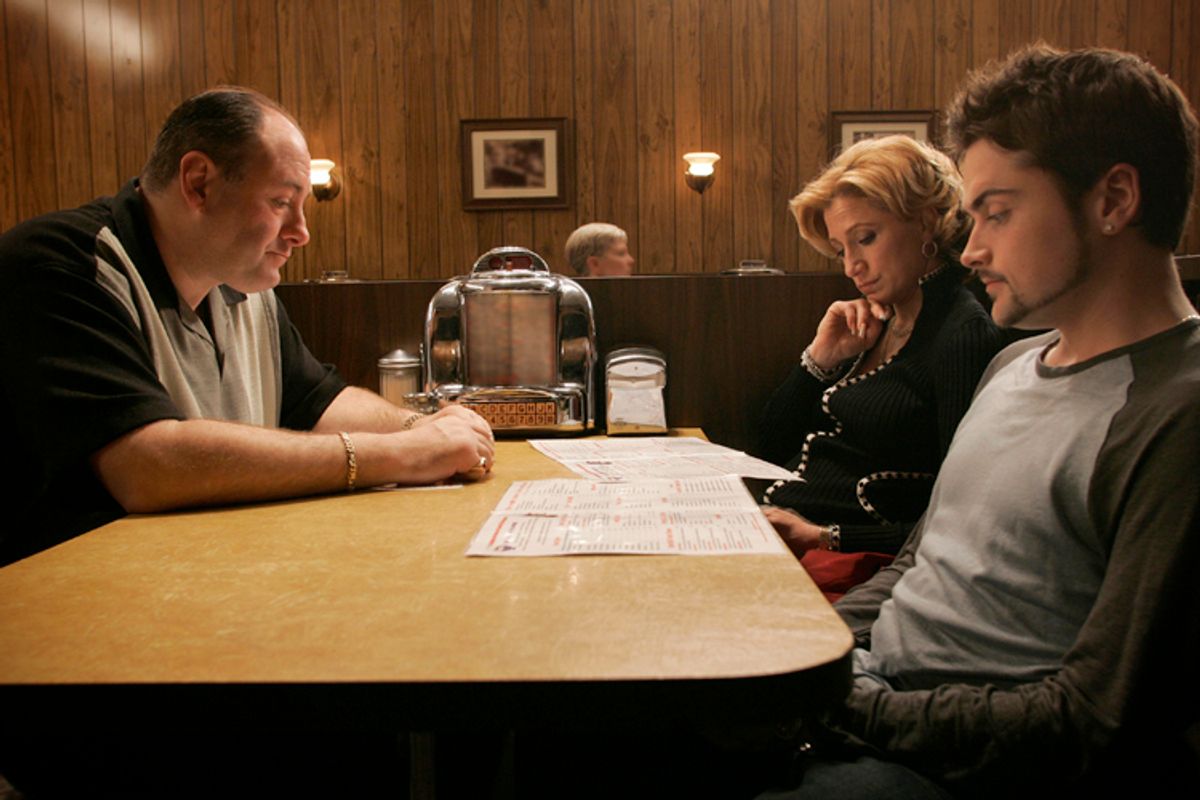 James Gandolfini, Edie Falco and Robert Iler in the series finale of "The Sopranos" (HBO/Will Hart)
--

Warning: This article does not contain spoilers for the series finale of The Sopranos.

Well before his publicist stated his words had been “misconstrued” in a Vox feature, and even before another journalist flipped out over a jokey Twitter account ruining the “experience” ofreading the pertinent quote for themselves, we knew that David Chase, creator of The Sopranos, was messing with us.

We knew this because what he said—on the topic of New Jersey mob boss Tony Soprano’sunclear and widely disputed fate—made zero sense. “No,” he told writer Martha P. Nochimson when she asked if Tony was dead, following a brief outburst. “No he isn’t.” To a true fan of the show, this can only read as a cosmic joke: Oh, you want an answer? Here’s an answer. Not very satisfying, is it. Have a nice life.

The fact is, you don’t abruptly cut to black mid-scene in a series finale to create a sense of mystery. That’s a season finale move, suggestive of a coming resolution you’re free to guess at: “Who shot J.R.?” It’s the final suspension in a Bach piece before it resolves, as it must, into the dominant key. The Sopranos’ ultimate silence—and don’t forget, Chase originally wantedthree full minutes of nothingness between the diner and the closing credits—is irresolution itself. Maybe Tony dies, maybe he doesn’t. The world goes on just the same.

So why don’t fans get that? Why is a writer with a deep understanding of Chase’s work and methods even bothering to ask what “happens” to Tony? Perhaps it’s because Chase succeeded, as Stanley Kubrick did with The Shining, in trapping his audience in the same purgatory his characters walk through. Ever since Chase pulled the plug on The Sopranos in 2007, people have parsed the final frames for clues that will never add up to proof of anything, just like the fevered theorists of the documentary Room 237.

It’s fun to play with these ideas, but in the grand sense, the detectives are wasting their time. For all their obsessiveness, it’s somehow lost on them that the last shot of a character surnamed Dante shows him in the limbo of a coma, that Paulie Walnuts explains the difference between hell and the afterlife’s waystation to a hospitalized Christopher Moltisanti, and that Tony spends a healthy portion of the series caught in a dreamworld between life and death. (The Sopranos Family Cookbook even includes a recipe for Uova in Purgatorio—“eggs in purgatory.”) Not the subtlest motif, yet we continue to overlook it.

Chase’s initial irritation at Nochimson’s question speaks volumes: “Why are we talking about this?” he asked, because in his view, there’s nothing to be curious about. Life is full of things you can’t and won’t ever know, undefined spaces, stories purely tangential to one’s own, people who vanish suddenly, without a trace. Why should art be any different? Consider the masterly digressive novel The Life and Opinions of Tristram Shandy, in which the narrator tries to pen his memoirs but never gets past the moment of his birth: experience is far too rich to fit within book covers or a TV screen. But one thing’s for certai—