"It shocks people, but it's important": Lawrence Lessig on the "radical" shift in American politics 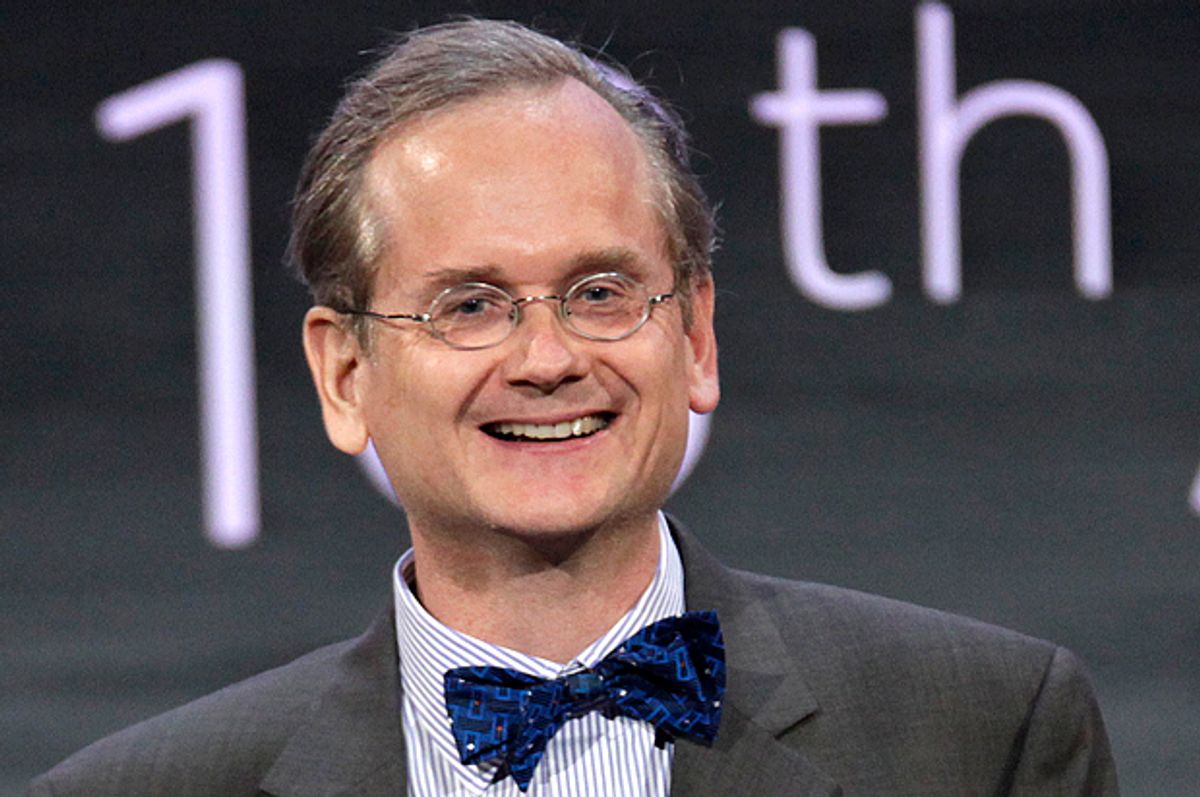 Like that of improving education or protecting the environment, support for campaign finance reform is near-unanimous — just so long as the issue is being discussed on the most abstract level. Case in point: the recent poll of 12 "battleground" states from the Democratic pollster Democracy Corps, which found an impressive 73 percent of all likely voters (Democrats, Republicans and independents) in favor of a constitutional amendment to overturn Citizens United.

But just like that of improving education or protecting the environment, support for campaign finance reform can break down once the conversation moves beyond identifying the problem and turns to finding and implementing a workable solution. Case in point: a difference of opinion between Harvard Law professor Lawrence Lessig and campaign finance historian Robert Mutch, author of "Buying the Vote: A History of Campaign Finance Reform."

In a recent interview, Salon asked Mutch to share his thoughts about Mayday PAC, the so-called super PAC to end all super PACs being directed in part by Lessig that is dedicated to supporting candidates who favor campaign finance reform, no matter their party affiliation. Mutch noted that Mayday had raised funds from wealthy pro-reform members of the Silicon Valley 1 percent, and expressed skepticism that Mayday could succeed by relying "only [on] one slice of the economic elite." He argued that money couldn't be taken out of politics until the 1 percent allowed it.

Salon called Lessig earlier in the week to get his response -- and talk about the reform movement, the Mutch interview and the status of the Mayday PAC. Our conversation is below and has been edited for clarity and length.

In a message to me, you mentioned finding parts of my interview with Robert Mutch "weird." What was it that bothered you?

There's this way people talk about the issue of campaign finance reform ... which is to think about the issue only in terms of remedies that would restrict political speech. That ignores where all of the action has been in campaign finance reform or corruption reform, and that's around efforts to provide funding as an alternative. And all of the skepticism about the feasibility and the effectiveness of reform seems to get tied to the failure to distinguish between efforts to restrict speech and [the Mayday PAC approach].

So to give people a sense of how there can be campaign finance reform that isn't premised around restricting money in politics, can you tell me a bit about your "democracy voucher" idea?

This wasn't my idea, this was an idea originally proposed by [professors] Bruce Ackerman and Ian Ayres. But the basic idea is you give every voter a voucher, and with those vouchers they can give that money to candidates and, in my version, candidates agree to fund their campaign with vouchers and small donations in addition to the voucher.

The point is, you're distributing these resources in a way that, from what we know from behavioral economics, will induce people to spend that money to support campaigns, and thereby change the incentives of political campaigns to focus on raising money from a large number of people as opposed to the current system, where members are focused on raising money from a tiny, tiny slice of the 1 percent.

I calculated the number of relevant funders in American politics today; it's something like 150,000 Americans, which is about the same number of people named Lester in the United States. That is the core of the corruption in the current system, because if [politicians] spend 30 to 70 percent of their time talking to such a tiny, tiny slice of America and depending on such a tiny slice of America, they can't help but be bent in the priorities and decisions they make. The way to fix that is to provide alternative ways of funding that induce people to [reach out to] a wide, wide range of Americans.

They're both structurally the same. They're creating an incentive for people to raise money from the many as opposed to the few, and that form of “campaign finance reform” is also, in my view, a reform this movement needs to adopt.

Of course it's not necessarily an either/or situation, but do you advocate this version of campaign finance reform because you think it's more likely to succeed, politically, or because you think there are actual, legitimate constitutional problems with the restrictionist approach?

I'm not so concerned about “Should we shrink the amount of campaign spending or should we regulate negative ads?” My concern is “What is the mentality of the candidate as the candidate figures out how he or she is going to fund the campaign?"

So how often do you come into contact with people who aren't experts on this issue and who just assume that, because you're in favor of campaign finance reform, you're pushing for restrictions on spending?

All the time. It's the biggest difficulty this movement faces.

People think about campaign finance reform and they think about restriction, and that makes it really hard to even get the conversation going, because people think restriction means the Supreme Court's going to strike it down. Or liberals think, “That means the ACLU is going to oppose it.” So it's kind of a non-starter.

It's not a new idea; people forget that every president between Nixon and Obama was elected from a different kind of public funding than the kind I favor — but still [used] public finding. The candidate who benefited the most from presidential public funding, of course, was Ronald Reagan, who ran three national campaigns on the public's dollar. He never would have been a candidate if there wasn't public funding, because in 1976 the Republican Party was not going to support a right-winger.

When I say this statistic, it sort of shocks people, but it's important to keep this in mind: When Ronald Reagan ran for reelection, he attended eight fundraisers. When Obama ran for reelection, he attended 228 fundraisers. You just get a clear sense from that statistic alone of the radical change in priorities of the president — but I can tell you it's the same dynamic in Congress.

The constant focus on raising money has radically changed the nature of what it is to be in government and we have to find a way to solve that. The first step, I think, is to change the way we fund elections.

To return to the Mutch interview, I'd like to hear what thoughts you have in response to what was my reading of his argument, at least in part. Basically, it sounded to me like he was making an argument about class and class power, and was saying that campaign finance reform isn't going to happen unless the donor class or ruling class (or whatever you want to call it) allows it. Did you interpret his comments in that way — that it's about class?

I did, and I was confused by one part and agreed with another part. I was confused by it because it made it sound like we were just trying to appeal to a tiny sliver of the 1 percent. I don't think anything succeeds appealing to the tiniest slice of the 1 percent. The other part about it that I agree with is — I don't like the word class, because it has so many connotations that are just not informative here, but this is about a political system that has effectively disenfranchised a huge proportion of the American public from a critical stage of elections.

I've been developing this talk, which kind of builds this analogy between the historical white primaries in the South, where in the critical first stage of deciding who was going to be the representative, African-Americans were excluded by law from voting in the Democratic primary. The analogy [is] to the "green primary" that we have allowed to evolve in American politics. The first critical stage of deciding who are going to be the representatives — mainly the fundraising to fund the campaigns — has essentially excluded not 15 percent of the American public but basically 99 percent of the American public. So what we need to first do is get that vast majority of Americans to recognize that they have been disenfranchised in a critical way by the devices we've used to fund campaigns.

The whole design of the Mayday PAC is to bring both the people who are benefiting from this system -- the people who have enormous political influence because of their money and their ability to spend it -- together with people who are burdened by this system, to say, “Whether we've benefited by it or not, this is not a democracy. This is not a representative democracy. It's an outsource of the funding of campaigns to this tiny, tiny fraction of the 1 percent.”

I'd imagine that getting people to come together, across economic and partisan lines, has been very difficult. What occurs to me is that you're sort of grappling with a self-reinforcing system: You're trying to overcome polarization in order to address a manifestation of inequality, but the polarization that's keeping you from building a larger coalition is itself a byproduct inequality.

Exactly right. My view is, just like the Civil Rights movement doesn't work unless whites and blacks agree to change the system together, this doesn't work unless left and right agree to address this common enemy within the political system. We're at a stage where the business model across partisan movements is not obvious — in fact, I'm not even sure it's possible. Part of that is because we are so well trained to be vicious about the other side and outraged about being associated with the other side.

From the very beginning of the Mayday PAC, we have said this is going to be a cross-partisan movement. We are going to support Republicans and Democrats and independents and support them not because they, in reality, all believe the same things; we're going to support them because, in reality, they all believe very different things, but they all agree that there is this fundamental problem, this common enemy, that is blocking the ability of our democracy to work ...

[N]obody really objected to the idea of the cross-partisanship when it was in the abstract, but when we started actually acting on it, all of a sudden, people — on the left, for example — were like, “Oh, my God! You're supporting someone who doesn't have our views on immigration and that's a terrible mistake. You need to back off and not support this guy.” And my response was, “No, no, no. The fact that he doesn't have our views on immigration is the point. It is that we are able to build a coalition of people who have radically different views about things like immigration, but have a common view about this underlying corruption.”

If we can't [get] that cross-partisan movement, we'll never succeed. People really aren't practiced in the idea that these radically different souls could find a common purpose, even though they have radically different objectives. That's what we're trying to practice. It's not clear if we can do it, but we're certainly trying.