From "Preparing the Ghost" to Elena Ferrante's series, a reading list for your long weekend 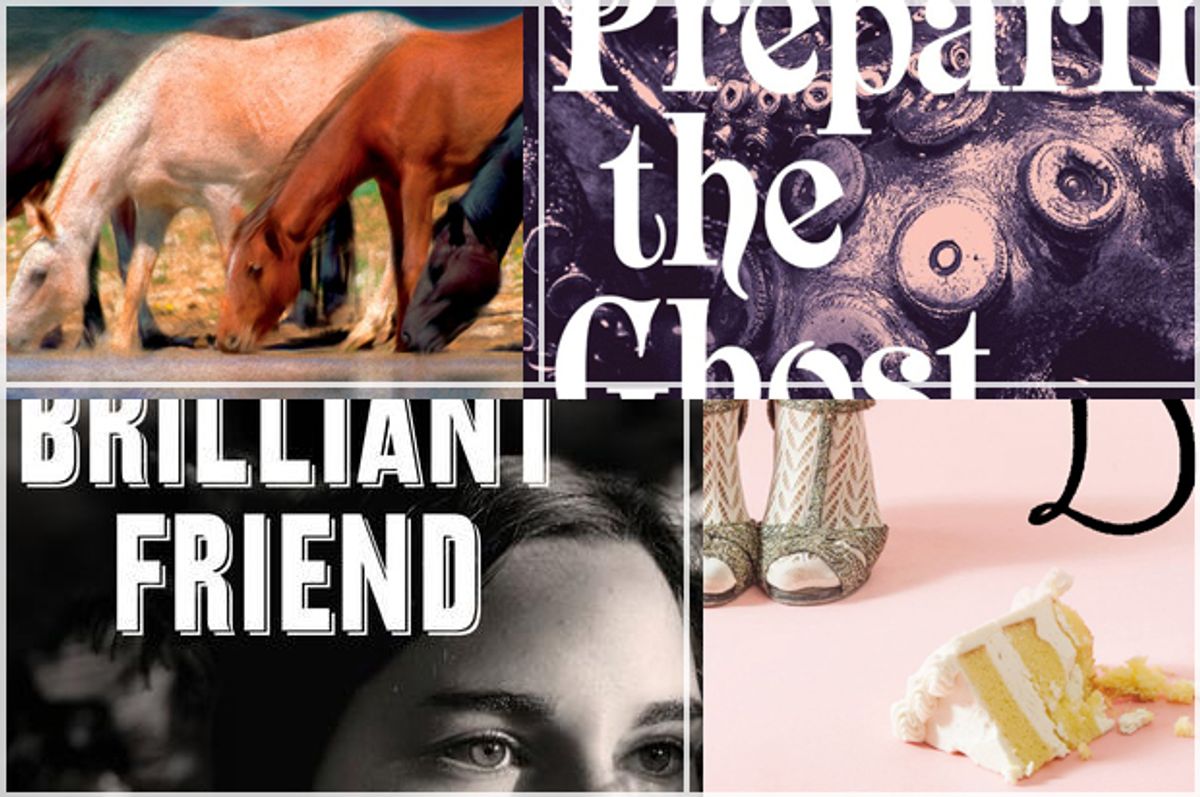 Even though most of us don’t want to admit it, Labor Day is finally here. Next week people will be posting a slew of beach photos and selfies in front of waterfalls. But this weekend, here are 10 books you should consider adding to your to-read pile:

I realize it's kind of annoying when people automatically compare a novel that is set in the West to Cormac McCarthy, but Brooks deserves the comparison for how effectively he portrays the Montana landscape. Even if you aren’t one who normally enjoys historical novels, "Painted Horses" has so much going for it: incredibly masterful sentences for a debut novel, strong female characters, a compelling love story and a suspenseful plot. The tidbits on archaeology alone are fascinating.

What do you get when someone who is obsessed with a subject writes about other people who are also obsessed with the same subject — and the subject happens to be the giant squid? You get an entertaining, informative and highly original book-length essay that delves into the deep in order to talk about one of the most mysterious creatures on earth.

"Nobody Is Ever Missing" by Catherine Lacey (FSG Originals)

Lacey’s novel about a woman leaving her husband and going to New Zealand is eerie and poetic. The main character’s meltdown is intensely felt and so haunting that her emotional traumas will burrow into your brain.

The Neapolitan novels by Elena Ferrante: "My Brilliant Friend," "The Story of a New Name" and "Those Who Leave and Those Who Stay" (Europa Editions)

The third book in Ferrante’s acclaimed series is due out next month, so now is a good time to catch up on the first two books. It’s rare to see an author tackle female friendship in such an all-encompassing, completely absorbing way. Ferrante, an author who is shrouded in mystery and refuses to reveal her true identity, writes about two women who become friends in Italy in the 1950s. It’s as much about friendship as it is about identity and place. How much of who we are depends on where we come from? Ferrante’s prose is straightforward but elegantly forceful.

Kate Zambreno’s novel about an American girl living abroad in London is gritty, raw, shocking and intense. It’s also an astute examination of what it’s like to feel uncomfortable in one’s own skin, let alone a country. Alienation, sexuality and the drudgery of a job one hates are just some of the highlights of this fragmented and gripping book.

"Save the Date" by Jen Doll (Riverhead)

Sometimes you need to read a book that will distract you from your own problems. Jen Doll’s hilarious memoir is a great choice. Each chapter is about a different wedding the author has attended, and what she learned from the mistakes that she made. For fans of Sloane Crosley and David Sedaris.

"What We See When We Read" by Peter Mendelsund (Vintage Original)

What do you picture when you’re reading a novel? Are the characters as real as the person sitting across from you at the dinner table? Or are they murky shadow-figures who consist of words and a few features? Mendelsund’s brilliant book takes a look at how we imagine things as we read.

"The Examined Life: How We Lose and Find Ourselves" by Stephen Grosz (W.W. Norton & Co.)

Psychoanalyst Stephen Grosz compiled stories, just released in paperback, from his many patients in order to convey what he has learned about human behavior over the past 25 years. August is when most of the therapists are on vacation (at least in New York City), so this is the next best thing to a real therapy session.

"This One Summer" by Mariko and Jillian Tamaki (First Second)

Labor Day weekend is a time to reflect on summer: what it means to us, how it has changed since we were children, how it has helped shape us. This coming-of-age graphic novel is beautifully drawn and offers a compelling story of two young teenage girls who learn about some of the more difficult aspects of life during their vacation.