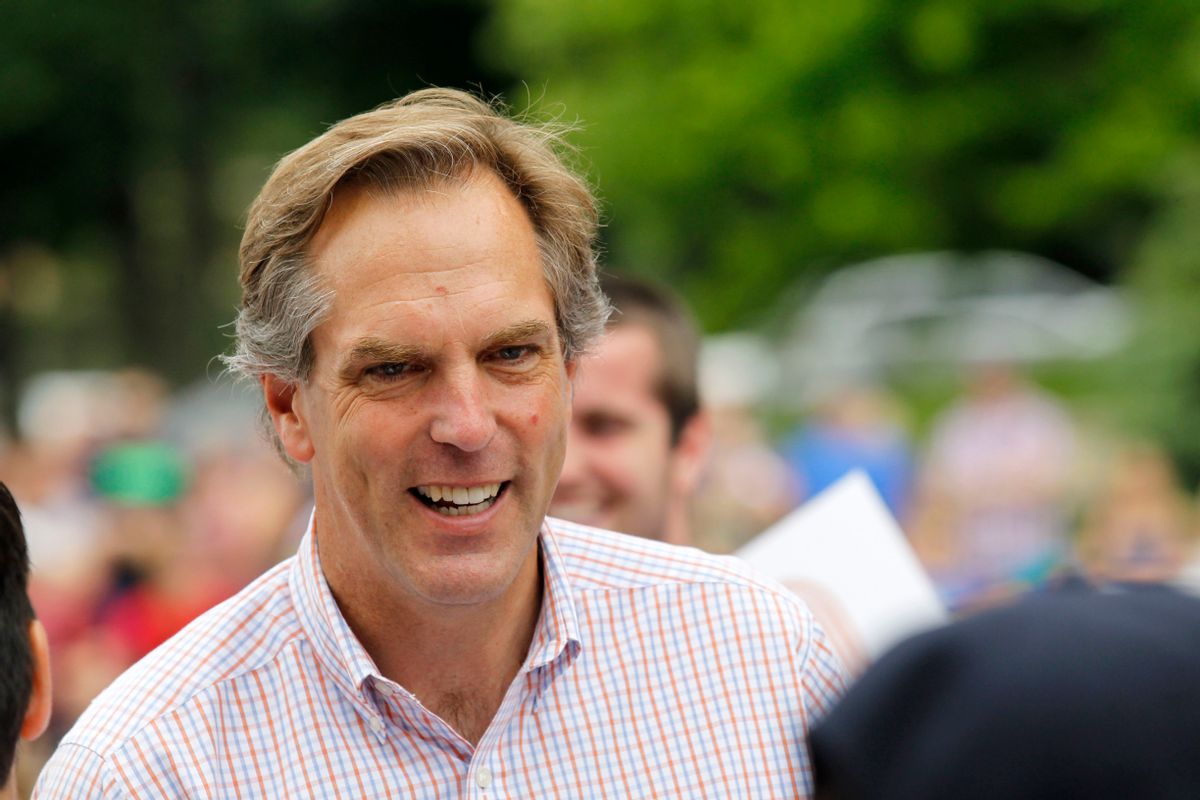 In this Friday, July 4, 2014 photo, Republican U.S. Senate candidate Mike McFadden talks with parade-goers during the Fourth of July parade in Delano, Minn. In 2012, McFadden's investment firm was involved in a merger that moved an American pharmaceutical company to Ireland and significantly dropped its tax rate. Inversions are legal, but politicians are calling for a clampdown - including McFadden. (AP Photo/Ann Heisenfelt) (AP)
--

ST. PAUL, Minn. (AP) — Years before Burger King sized up a Canadian headquarters in a hunt for lower taxes, Republican U.S. Senate candidate Mike McFadden's investment firm was involved in a merger that moved an American pharmaceutical company to Ireland and significantly dropped its tax rate.

McFadden's Minnesota-based firm made more than $11 million, according to public filings.

The 2012 deal came at the foot of a recent wave of so-called tax inversions in which U.S. companies merge with a foreign partner and reincorporate abroad to generate tax savings. With such deals increasingly grabbing headlines, it could become a flashpoint in the Minnesota race as McFadden tries to unseat Democratic U.S. Sen. Al Franken.

Inversions are legal, but politicians — including McFadden — are calling for a clampdown. He has described it as a "tragedy" when the U.S. loses tax revenues if a company moves overseas, such as Minnesota-based Medtronic. The company also is eyeing Ireland, where the corporate tax rate is 12.5 percent compared with 35 percent in the U.S., while Burger King announced this week it planned to acquire Canadian coffee chain Tim Horton's and shift its tax residence north.

In an interview Friday with The Associated Press, McFadden distanced himself from the 2012 deal that took Jazz Pharmaceuticals abroad; he was CEO of Lazard Middle Market at the time. McFadden portrayed the tax inversion as a one-sided business maneuver driven by Jazz and its financial adviser — not the Irish drugmaker Azur Pharma, which his firm represented.

He also said he was not personally involved in negotiations and didn't know of a possible tax inversion until the merger was announced.

"I think inversions are bad for America," McFadden said. "Any time we lose a corporate headquarters from the United States, especially when we lose them from Minnesota, it's a double whammy."

Minnesota Democrats have long sought to brand McFadden as a ruthless profiteer who earned his millions through layoffs. McFadden's campaign insists his firm had no role in any its clients' employment decisions and merely acted as a middle-man. They point to Franken's own small investment — through a "socially responsible" mutual fund — in Lazard Middle Market's parent company as proof it's a good actor.

"Mike McFadden knew what kind of buyer he would attract when he represented a company in a nation known for being an offshore tax haven," the senator's campaign spokeswoman Alexandra Fetissoff said Friday. "He knew he was helping an American company dodge paying taxes and is just as culpable for this deal as anyone else."

Jazz Pharmaceuticals appears to have been the only inversion involving a client of McFadden's firm.

In that merger, Azur Pharma contracted the Minnesota-based investment firm to prepare and advise on a possible sale. Lazard started contacting potential buyers in May 2011, and Jazz — then headquartered in Delaware — quickly expressed interest, according to filings with the Securities and Exchange Commission.

After sizing up each other's businesses, the companies' two boards approved a deal. Jazz's board specifically noted the "tax efficient corporate structure ... as an Irish tax resident."

Jazz officials didn't respond to a request from the AP for comment on the motivation behind the inversion. Several former employees from the American and Irish firms declined comment.

McFadden said his firm's negotiations with Jazz Pharmaceuticals and any other suitors were handled solely by the Lazard Middle Market's health care team. But speaking generally, he said his firm would have had no involvement in the buyer's plans to enact a tax inversion.

The U.S. has the highest corporate tax rate in the developed world, though companies apply accounting techniques and loopholes to lower their payments.

Franken and McFadden agree those loopholes should be closed and the overall tax rate should be dropped to simplify an increasingly complex federal tax code. But they differ on execution.

McFadden said he'd consider a stopgap measure to dissuade companies from fleeing, but worries plugging the inversion loophole would open several more. He said Congress' focus should be a broad tax overhaul that includes provisions to only tax profits made inside the country.

Franken said he supports a bill that would make inversions harder to pull off for two years. That could buy Congress time to hammer out a tax deal.

"While we're waiting to do it, we need to stop this rash of inversions," Franken said.