How David Mitchell gets fantasy wrong 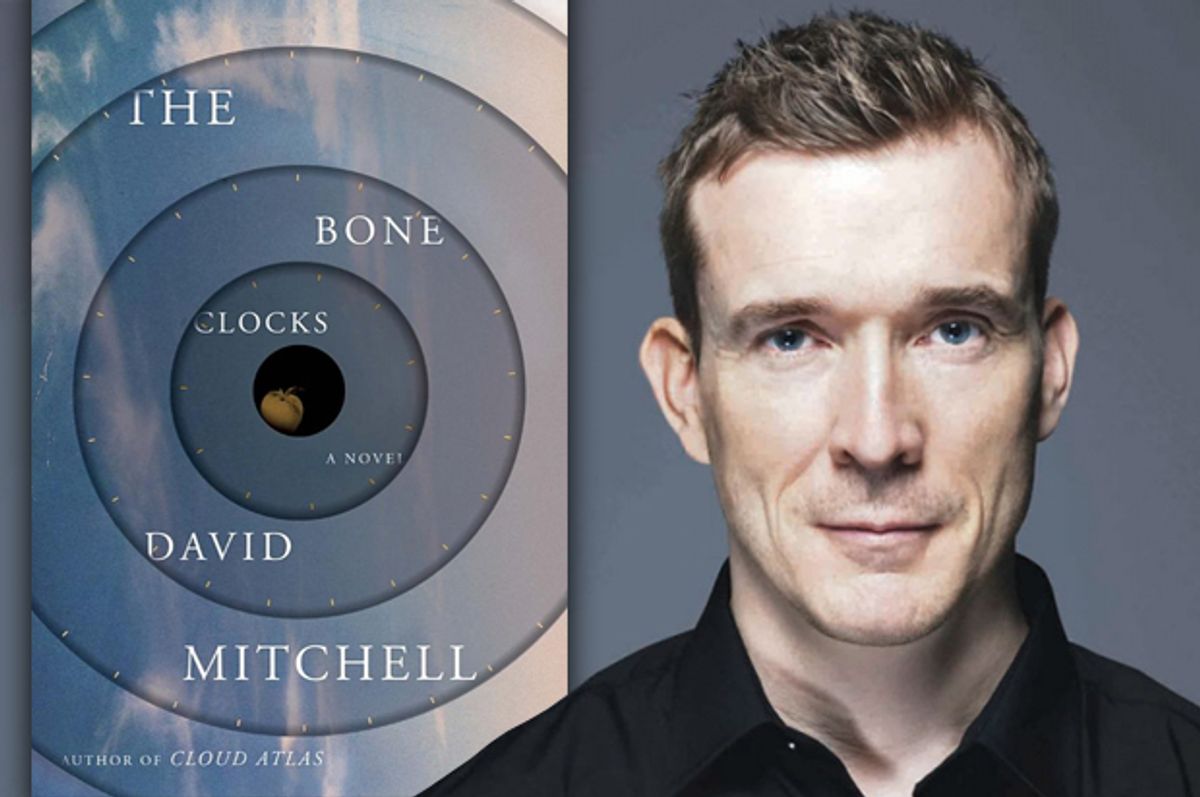 David Mitchell's early novels are magpie, patchwork affairs, assembled out of sumptuous scraps scavenged from other writers' stylistic wardrobes and linen closets. Those scraps, however, are sewn together with a thread that's often tatty and synthetic, like plastic that disintegrates with exposure to too much light. The wholes of "Ghostwritten" and "Number9Dream" are less than the sum of their lovely parts.

Then came "Cloud Atlas," and with it international success. That 2004 novel is also a collection of pastiches -- Mitchell "does" Melville, Evelyn Waugh, a generic thriller and, finally, Russell Hoban's "Riddley Walker" -- but this time the binding material is an ingenious construction of divided and nested narratives, invoking the movement of a chamber music sextet. "Cloud Atlas" was a gorgeous Japanese puzzle box of a book, one of those rare novels that's both structurally adventurous and entertaining. Does it matter that once the reader has flipped its catches and slid open its secret doors, the treasure inside this puzzle box turns out to be little more than a vaguely New Age-y assertion of human interconnectedness -- the thematic equivalent of a dime-store ring? Not really; the solving of it makes "Cloud Atlas" a gratifying work, not the solution itself. "It's not that the book is particularly smart," a friend remarked, "but reading it makes you feel smart."

Mitchell followed "Cloud Atlas" with less complicated and flashy but also more substantive novels -- "Black Swan Green," his best work, and "The Thousand Autumns of Jacob de Zoet." ("The Thousand Autumns of Jacob de Zoet" did have an early Kurosawa film plopped right in the middle of it, like the dollop of jam in a thumbprint cookie.) His post-"Cloud Atlas" work has shown increasing heft. But with Mitchell's latest book, a 600-page epic titled "The Bone Clocks," the weight is more literal than figurative. This new novel represents an uneasy attempt to fuse the disparate veins of Mitchell's work, the brilliant prose mimic and genre buff with the quieter literary observer of the human condition. Other writers have made such crossover gambits work, but Mitchell, alas, stumbles.

Perhaps the most remarkable thing about "The Bone Clocks" is that it's so much fun until the point, about 450 pages in, when the ostensible fun starts. That is to say, the novel's first four sections, which describe the 85-percent-ordinary experiences of a woman named Holly Sykes and three men whose lives she touches, the parts that most resemble a literary novel, are tremendously enjoyable. It's only in the fifth section, when Mitchell tries to pay off on a supernatural subplot running through the preceding four, that "The Bone Clocks" begins to creak and groan. The novel is hijacked by an overheated and underdeveloped good-vs.-evil story line involving a secret society of baddies who drink the souls of the innocent ("the Black Wine") in order to live forever.

Yes, this is a vampire novel, even if one of the good guys (also immortal, but naturally so, without having to consume the lives of others) preemptively scoffs, "Oh, the V-word!" The malevolent Anchorites consume souls rather than blood, but they're vampires in all but name. A ragtag band of noble vampire-hunters, called the Horologists, enlists Holly in making a desperate, last-bid attempt to destroy the demonic chapel from which the bad guys obtain their power. Holly, who until this point has behaved like an actual person, begins to spout lines like "These individuals have harmed, or threatened, people I love. So here's the thing: I'm dangerous." There's a sadistic, mustache-twirling supervillain. There's a big climactic battle with magical light rays in which all seems lost until one last, titanic explosion.

And no, you can't really call any of this a "spoiler" because you have already seen this movie, probably about 48 times, and you know exactly how it will turn out, right down to the zinger delivered when a vampire is dispatched just as she's gloating over a good guy's doom. A few hundred pages of well-observed, engaging and plausible fiction -- about the summer in 1984 when a teenage Holly ran away from home to work on a strawberry farm; about a slick, amoral rich boy adept at hustling his even richer Cambridge friends who meets Holly a decade later during a Christmas blizzard at a Swiss ski resort; about Holly's war journalist husband and his inability to settle into a peaceable family life; about a misanthropic novelist with a flagging career who befriends the middle-aged Holly at a literary conference -- all of this culminates in a massive, impacted wad of very hokey science-fiction action movie clichés.

Mitchell does redeem this choice a bit with the final section of "The Bone Clocks." It's narrated, like the first one, by Holly, and set about 30 years from now. Energy reserves have finally run out, and climate change and contagion harrow humanity, while the seaside Irish village where Holly lives adjusts to a slow slide back to pre-technological society. It's not exactly post-apocalyptic, but it's a world where a militiaman can steal an old lady's solar panels and say, of his own grandparents, "They're all dead, like my parents. They had a better life than I did, mind. So did you. Your power stations, your cars, your creature comforts. Well, you lived too long. The bill's due. Today, you start to pay."

This downbeat coda is probably Mitchell's way of pointing out that the sort of big, splashy, pop-culture crisis-and-resolution he's just given us -- the underdog heroes saving the world from the forces of wickedness -- is fully inadequate to describe what's really happening to the world around us. We're the bad guys we ought to be battling, but instead of the Chapel of the Dusk, our sinister, life-sucking apparatuses are power stations and private automobiles. Very true, but still, it's a bait and switch. If the war between the Horologists and the Anchorites was just a diversion, why spend so much of the preceding 500 pages telling us about them? Their secret conflict is the thread that runs through all the episodes we're shown of Holly's life, and without the mystery of a lifetime's worth of uncanny experiences -- voices and apparitions, precognition, missing time -- those pieces fall apart like an unstrung marionette. Holly (more a collection of the appealing traits that people like in a heroine than a flawed, living character) could not sustain it alone.

Cross-genre fertilization has been reinvigorating contemporary fiction for several years now, but let this novel -- so delightful in so many respects but so adamant in its refusal to add up to much -- serve a cautionary example. At its best, genre-bending brings accomplished storytelling to literary fiction and psychological depth plus superior prose to mysteries, science fiction and fantasy novels. But a good hybrid requires both genres to up their games rather than falling back on old, tired habits. With "The Bone Clocks," instead of the two genres infusing each other with their own particular strengths, they only serve to hollow each other out. Holly's story isn't made sturdy enough to carry the book without her connection to the secret war between the Horologists and the Anchorites, but the war itself is silly and ultimately pretty irrelevant. The many callbacks to characters in Mitchell's earlier books seem, in retrospect, to diminish rather than enrich those books by implicating them in that cheesy showdown at the vampire corral.

Mitchell is a gifted and inventive constructor of long narratives in an age when even the most talented literary novelists have a hard time holding their readers' attention. It's easy, having soldiered through yet another beautifully written but flaccidly plotted coming-of-age novel, to pine for a storyteller of Mitchell's skill. It's also easy to forget that a crackerjack plot whose meaning dissolves upon delivery is very nearly as frustrating as no plot at all.