The NFL's toxic lies: Here are the worst excuses fans use to justify watching football

As a recovering football addict, all I want is for fans to stop deluding themselves about the sport I used to love 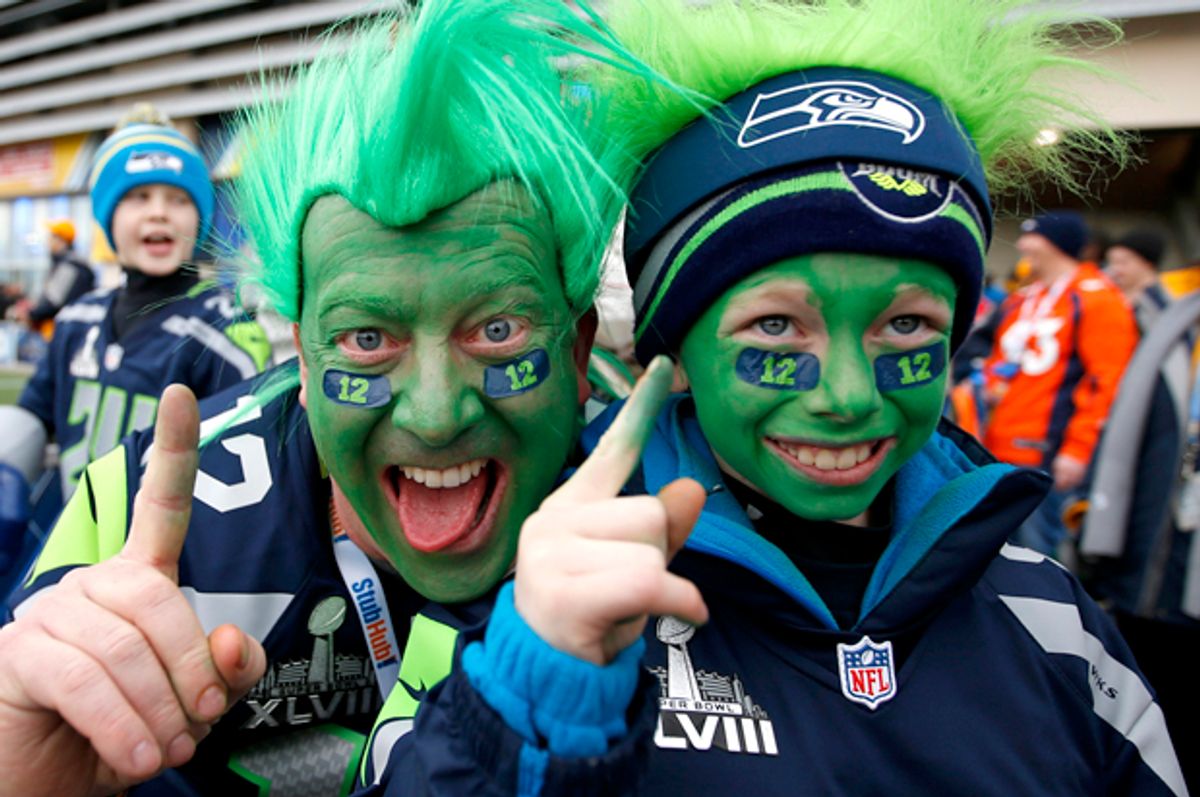 With pro and college football set to kick off this week, the official Season of Rationalization is upon us again. This is that special time of year when millions upon millions of fans attempt to justify — to themselves and anyone who dares question them — why they watch a violent, commercialized sport that we now know can cause brain damage.

I know this firsthand because until recently I was a football addict. (Technically I’m still an addict, I just no longer use.) And thus I have spent years trotting out these shopworn justifications.

The sad truth is that they’re nonsense. Not one of them stands up to any sort of sustained ethical scrutiny. So allow me to channel my inner defensive fan, if only to set the record straight about how the Football Industrial Complex actually operates.

The NFL and NCAA are going to find ways to make the game safer!

Fact: Mass times acceleration equals force. Football players are bigger and faster than ever, ergo their collisions are more violent. What’s more, medical researchers have determined that brain trauma isn’t just due to the big hits that cause concussions. It’s due to the thousands of sub-concussive hits that are inherent to the game and occur on every play. The brain is a soft organ. When it slams against the inside of the skull, it gets damaged. No high-tech helmet is going to insulate players from basic physics and physiology.

And NFL commissioner Roger Goodell knows this. A study commissioned by the league showed that football players are 19 times more likely to develop brain trauma-related illness than non-players. For the past year, league officials have been working to settle a lawsuit brought by 4,500 former players, who accuse the league of covering up the link between football and brain damage. The NFL will likely wind up paying hundreds of millions of dollars to settle the suit, possibly billions. With that much money at stake, don’t you think Goodell (who is nothing if not a shrewd businessman) would have found some way by now to eliminate his liability if he could?

Of course, if the NFL and NCAA wanted to drastically reduce collisions in the game, they could do so. (Two-hand touch, anyone?) But they don’t want to, because football’s massive profits depend on its violence. So these governing bodies are left paying legal hush money and relying on fans to keep watching despite their qualms.

Fortunately for them, there’s a huge faction of fans that openly embrace the violence and simply put aside the potential end result, which is that their heroes (such as Junior Seau) wind up with brains so damaged that they kill themselves.

The basic law of capitalism prevails here: If it makes money, don’t fix it.

The players know the risks; they choose to play anyway and get paid millions!

As the medical tolls of football grow more overt, this has become the default alibi on sports talk radio. It’s a transparent effort to offload the moral burden onto players. But the issue isn’t the choice made by players, but the choice made by fans to consume the game. We’re the ones who ultimately elevate players to the stature of demigods, and who pay those huge salaries. Without us, there is no NFL.

Unlike other dangerous professions — coal miner, soldier and so on — the ultimate value of football players isn’t that they produce a precious resource, or protect the homeland. It’s that they entertain us.

Also: College and high school players are not paid. Yet.

It is absolutely true that football can instill values such as discipline, courage and teamwork. But it is also incontrovertibly true that football instills less wholesome values, as well. The most basic one is aggression. Of course, there are plenty of sports that require kids to channel their aggression. But football is unique in rewarding those who visit that aggression upon other boys. You don’t get points for empathy. You get points for how hard you hit. Sports pundits continually express shock and dismay when players are aggressive off the field. But what, exactly, do they expect from young men who are lauded and promoted and paid huge salaries for savage behavior?

Football is a realm in which athletic prowess trumps morality, and in which the hyper-masculine is celebrated. This is why, for instance, a famous running back such as Ray Rice, who beat his girlfriend senseless, has little to fear from teammates, coaches, fans or even the league office. Women are ultimately considered ornamental or sexual objects.

And gays? The fact that the NFL is considered enlightened for tolerating Michael Sam, a single openly gay player, says it all.

Football is a ticket out for kids with no other prospects!

What fans really mean when they say “kids with no other prospects” is poor kids, often kids of color. And that’s what makes this line so insidious. Because the fact is that only one out of 500 high school seniors who play football will make the pros. All fans ever see is that one kid. What about the other 499?

The notion that we should regard a violent game (played for our amusement) as a form of salvation is absurd and degrading. What the young men in our most economically vulnerable communities need is equality of opportunity, not a lotto ticket based on their talent for controlled violence. They need better schools and teachers and social services.

Football doesn’t offer them that. It distracts them, and us, from the broader systemic inequalities that keep poor boys, in particular, mired in a cycle of poverty and incarceration.

This is no doubt true. Football, perhaps more than any other sport, feeds our instinctual need for tribal identification. But what, exactly, does it say about the state of our communities that we need football to feel united?

Aren’t there other ways for us to feel united, ones that don’t involve young men visiting harm upon each other and possibly developing brain damage later in life? This question looms especially large in those communities that rally around high school football. I say this because a recent study by researchers at Purdue University showed that kids who play high school football — even those who suffered no concussions — showed diminished brain function.  Isn’t the goal of high school (and college) for kids to develop greater brain function?

Yes, football does create jobs — just like any multibillion-dollar industry does. The question is: How efficiently does football create jobs and who benefits from them? Plenty of economists have studied the economic impact of the NFL. Here’s how that particular cartel operates.

Because we fans love football so much, the NFL has tremendous economic leverage. This is why league officials recently had the audacity to ask Katy Perry, Coldplay and Rihanna to pay them for playing the Super Bowl halftime show.

More routinely, what NFL owners do is extort local politicians by threatening to move their teams to a new city. They do so to force these politicians to pledge taxpayer dollars to build shiny new stadiums. The profits generated by the games played in these stadiums are not remitted to the taxpayers. Oh no. They go straight into the pockets of NFL owners.

For example, in 1995 the late Art Modell announced that he was moving the Cleveland Browns to Baltimore. Why? Because Baltimore officials had pledged to build him a new stadium with $200 million in public funds and where the newly minted Ravens could play, rent-free for 30 seasons, with Modell keeping every penny from tickets, parking, naming rights, concessions and the sale of luxury boxes and club seats.

Did the $200 million in public funds create jobs? Yes. But the profits from those jobs did not go back into the local community. They went into a rich man’s pocket.

As an economic endeavor, the product football sells is distraction. It’s a thrilling game. But the economic impact is mostly temporary and seasonal. It’s not a local business that creates year-round jobs with decent wages. It’s a carnival.

Hey, get off my back. I just watch a few games a year!

Yeah, I know. I’ve said the same thing for years.

But the bottom line is that the NFL is the force driving the commercialization of the sport at all levels. It derives most of its profits from passive consumption (i.e., couch potatoes like you and me). We’re the reason the NFL can charge the networks billions for broadcast rights.

To reiterate: Without us, the NFL wouldn’t exist.

This is the essential truth that the Football Industrial Complex is forever trying to obscure. When we watch football, even casually, we’re supporting the entire system. If we don’t like the way football operates — the excessive violence, the greed, the dulling of our collective empathy — it is upon us to stop watching.

As a lifelong fan, I don’t say this casually. I’ve been in continuous state of withdrawal since I stopped watching last year. But I’d rather suffer that inconvenience than continue recycling the same lame excuses every season, knowing deep down how full of shit I’m being.