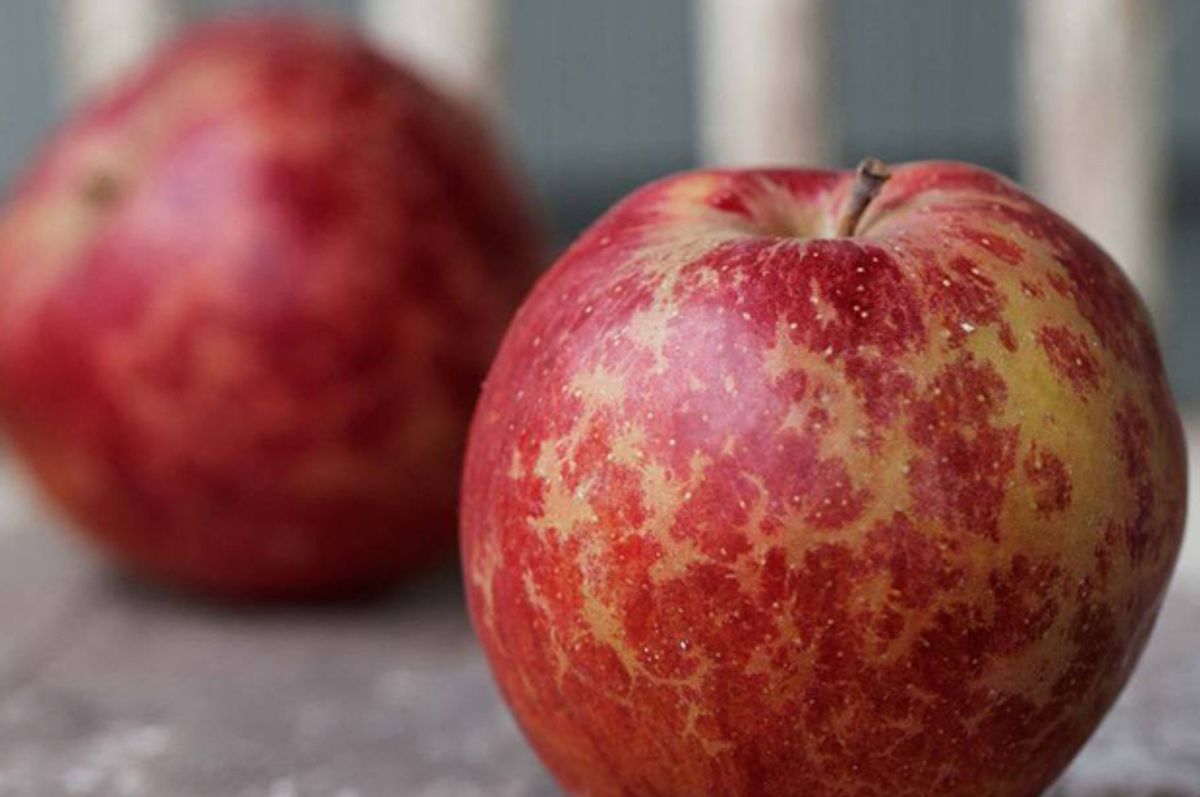 For someone like myself, who adheres to the "apple a day" maxim, there's perhaps nothing more disheartening than the realization that we live in a culture deprived. America in the 18th and 19th century was a different world for aficionados -- one in which different apples grew in different regions, and in which they were prized for their unique flavors, shapes and textures, the variety arising both spontaneously and from entrepreneurial farmers who took advantage of easy-to-master grafting techniques. Then supermarkets and the mass-marketization of food took over; at some point, we learned to settle for less.

It turns out there's a lot out more out there -- all you have to do is go look for it. Author Rowan Jacobsen did just that; the result of his investigation, "Apples of Uncommon Character," pays tribute to some of North America's finest and most obscure specimens, reviving the lost art of apple appreciation in the process.

Salon spoke with Jacobsen, via email, about the wide world of apples out there beyond the standard stock you're used to and, more likely than not, sick of. Check out 12 of the most unusual -- and delicious -- specimens featured in the book, and then read on for our conversation (captions provided by Jacobsen):

I can name maybe six varieties of apples that seem to turn up everywhere. How did Red Delicious, Granny Smith, McIntosh and friends take over? Are they just easier to grow, and to mass produce?

Yeah, most of the varieties you see became popular because they were convenient/profitable for growers, not because they wowed consumers. They produced a bumper crop every year, they lasted well in storage, etc. Red Delicious makes a particularly interesting case study, because aparently the original Red Delicious, which started in Iowa in 1881, was a pretty darned tasty apple. But it wasn't uniformly red. Over the decades, every now and then a redder mutation would arise, and growers would propagate that one instead, because we consumers consistently choose the reddest apple in the store, regardless of flavor. To this day, growers get paid based on the percent of red, not based on flavor or texture. Which is how we wound up with a mealy, cardboard-y apple that is, to use the industry's term, "midnight red."

You write about how we used to eat regional apples, which were adapted to local conditions. It must have been much more efficient to grow those, right?

Yes and no. A lot of the regional varieties were quirky and would only set fruit every other year, or produced lightly, or made tender apples that were delicious off the tree or in the local farmer's market but couldn't withstand shipping. The modern, international apples of today were partly chosen for their workhorse qualities.

Is it possible a changing climate will bring us new apple varieties? What other factors influence what's being grown?

I've wondered about that. Many heirloom varieties (such as Northern Spy and Baldwin) were adapted to a northern climate and may be at risk. On the other hand, there is a whole subcategory of extraordinary apples that evolved in the South, which northern orchards (where most are located today) have never been able to use. Maybe we'll see a resurgence of these unique southern varieties like Arkansas Black and Grimes Golden.

Most of the apple guides you reference in the book were written a long time ago -- further than a century back. When did we lose the art of apple appreciation?

At the same time that we lost many family farms: in the first half of the 20th century, as industrial agriculture and national distribution arose to replace local agriculture. The huge orchards out West could crank out apples much more cheaply than the small farms, but they tended to just produce one or two kinds. Efficiency.

Humans have been experimenting with apple breeding for thousands of years, but there are no GM apples yet. Are you anticipating that will change?

Get ready. A Canadian grower has submitted its genetically modified "Arctic" apple for approval by the USDA. It has extra genes inserted into its DNA that prevent it from browning when cut. So far, U.S. growers are against it, because they don't want to taint the apple's wholesome image. But stay tuned.

I'm intrigued by the DIY aspect of grafting -- did you encounter a lot of people who are experimenting with apple varieties, just as a hobby?

Oh yes, there are hobbyists and heirloom specialists all over the country. Many of them have hundreds of varieties in their orchards, and for a few bucks they'll send you a cutting so you can grow your own. The USDA has 2,000 varieties in their germplasm orchard in Geneva, New York. And, of course, every wild or roadside apple tree that grew from a seed is a unique variety, just waiting to be noticed, appreciated and grafted. Any of the thousands of trees that line the dirt roads around me in northern Vermont could be the next Honeycrisp -- but probably isn't.

What makes a great apple? Is it crunch? Sugar content?

Ah, this one bugs me. Yes, a super crunchy, sweet apple is a great thing. But we've all kind of learned that an apple is supposed to be that, partly because we were all scarred by those decades of mealy Red Delicious. But apples used to be great in all sorts of different ways. There were juicy, tender ones, and ones that smelled like pineapple and banana, and ones that were hard and tart and specifically intended for baking. We haven't had a truly great baking apple on the market in a century. A hundred years of sub-par pies, and we haven't even known what we were missing. The same is true with hard cider. Most ciders on the market today are not made with true cider fruit, because there is so little available. It's like trying to make great Burgundy with table grapes. I look forward to this changing -- and it is.

How do cultural preferences affect which apples are most appreciated?

In Asia, which produces the vast majority of the world's apples, they like their apples very sweet, with tropical fruit notes. Fuji is their main apple, with that touch of lychee to it. The American West Coast is pretty Asian in their preferences, but Northeasterners (and the English) still cling to their old-school tart, slightly bitter apples. I think it's climate-related. If the weather makes the people sour and a bit crabby, it does the same thing to the apples.

Did you taste all of the apples you feature in the book?

And more. There were quite a few that didn't make the cut, because I'd already maxed out my allotted page count. I'm still sad about some of the really obscure ones I had to let go, like Minister von Hammerstein, which I think of as the Mel Brooks apple.

Yes. Some you'd swear were pears. Others look like plums. Some of the cider varieties taste like soap. And the Knobbed Russet looks more like a potato or a toad. Or a toad-potato.

You say we're now in the "Second Age of the Apple" -- what do you recommend as the best way to take part in and reap the benefits of this renaissance?

They are more available than ever. Lots of pick-your-own places are offering more and more interesting varieties. Farmer's markets, too. Mail-order is an option, too. And even stores are coming around. Co-ops in the Northeast often have some heirlooms. I'm working with Whole Foods in New England to bring some wild and crazy apples to their displays this fall. This isn't just about heirlooms, either. Even the big growers have finally realized that consumers like flavor and novelty, so many of the new apples coming out of the breeding programs (like Pink Lady, Pinova, Ambrosia, Jazz and SweeTango) are extraordinary. Our ancestors would have flipped for them, too.