"All I see is Palestine": How I went to cover a Rihanna concert and caused a political firestorm

As a freelance arts writer in Israel, I made a dumb mistake that thrust me into the midst of the Middle East crisis 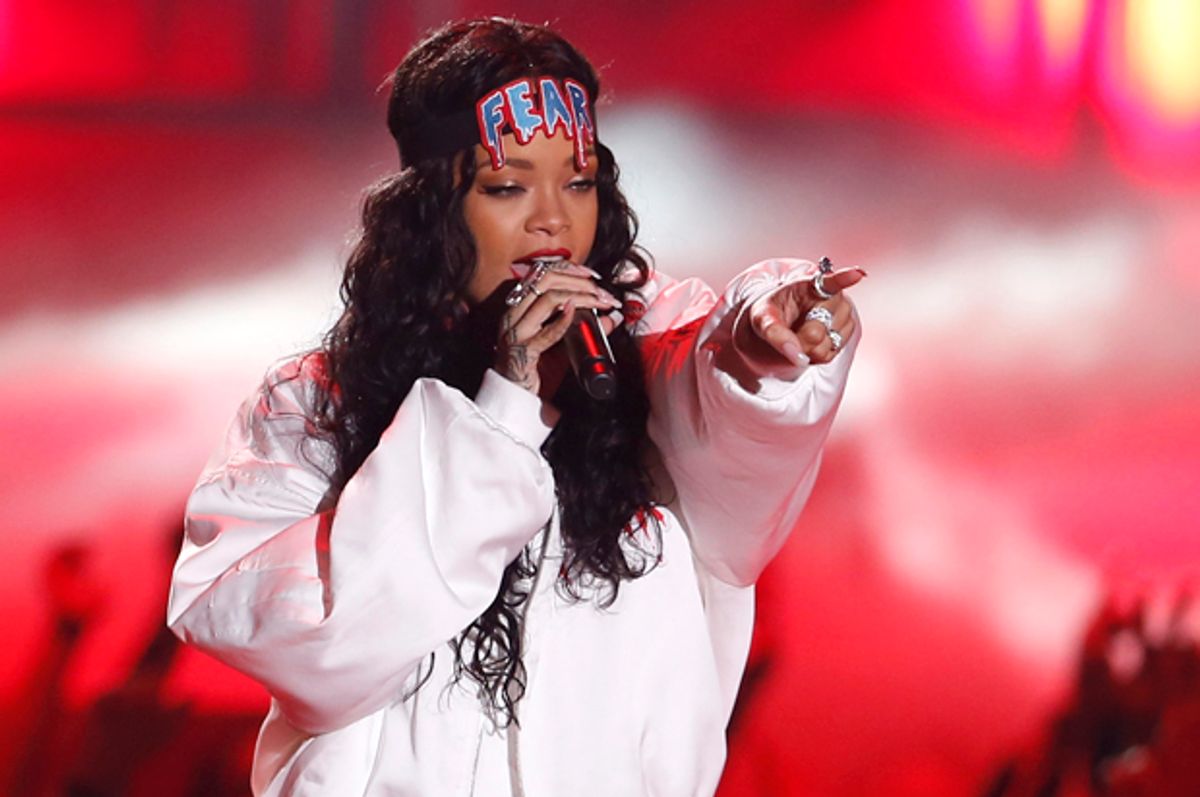 By the time Rihanna showed up, I was annoyed, tired and hormonal. She was more than two hours late for her concert at Tel Aviv’s vast Yarkon Park, where I wandered among tens of thousands of young Israelis, not knowing a soul.

But why would I? I’d only just come to Israel in a desperate Hail Mary move, to continue IVF in a country known for its high success rates. Being in my 40s, I wasn’t a particular fan of RiRi (as I later learned was her nickname), but volunteered to cover the concert for a local English-language newspaper I hoped would hire me, at least until I fell pregnant and returned to New York.

Her performance was short but unremarkable. I jotted down some notes about her outfits and dance moves, and a few hours later went back to our temporary digs to write the story, a typical man-on-the-street article that recapped the night’s events and interspersed adoring quotes from fans in the audience whom I’d interviewed while waiting for her to take the stage.

The next morning when I checked online to make sure the piece had been posted, I got a sick feeling when I read the headline: “Rihanna: ‘All I see Is Palestine,’” was the title, using a line in the story where I’d mentioned how the artist had changed up the chorus to one of her songs to include some local flavor.

When I’d scrawled the line down the night before – as she sang the chorus to “Pour It Up,” All I see/is dollar signs – I’d thought the Palestine mention was a way to show sympathy for the underdog in the region.

I’d been a journalist for two decades, but hadn’t covered politics in a long time.

I had no clue I had just stepped into a Mideast war.

No – not the actual war between Israel and Palestine, where real people lose their lives – but the media war whose battles are fought between various groups hoping to win the news cycle. Jewish publications and media watchdogs accused me and my paper of being so left-wing that we’d fabricated the story, which was quickly going viral around the world.

I watched uneasily as the news was regurgitated in Spanish, French and Arabic, until someone on Twitter posted a video that showed Rihanna singing her song. As originally written. With no mention of Palestine. I had misheard it. I had made a major error. My newspaper retracted it. But it was too late. The pro-Israel camp was gloriously gleeful to show a bias on the part of my paper. The mainstream media did what it always did when celebrity and scandal were involved, reporting, rereporting on what the Washington Post called “The Rihanna Israel-Palestine Controversy That Never Happened,” churning me up in the teeth of its machine and spitting me out, crushed.

That’s how it felt, anyway. Over that long weekend, I cried for three days straight as former colleagues and Twitter strangers taunted me on social media. Maybe it was the hormones, maybe it was watching my career – the one thing I was counting on distracting me while doing IVF in a foreign country – go up in flames. Or maybe it was simply the shame of public humiliation, swiftly increasing like the national deficit tally at Times Square. Another article. Another tweet. Another Facebook mention. I couldn’t even defend myself; I was hoping to hold onto a job.

But that was not to happen. Waiting for the phone to ring with news of my fate, I wandered around our rental apartment rambling like a lunatic. How could I have been so dumb? Why did I make such a terrible error? Why didn’t I check with anyone? As I read what people were saying about me online, I didn’t just feel like a bad journalist: I felt like an abominable human being. A few other reporters called in to regale me with tales of their appalling media blunders, but they were pre-Twitter, so I was hardly consoled.

Through the haze of my hysteria – which was so heaving and hiccupy my husband told me to fly back to New York just so I could calm down – I starting wishing for the impossible: that I had not gone to the concert. That I had not come to Israel. That I had had a baby earlier, so I wouldn’t have to be going through any of this hellish treatment.

Over the next few months, I had a lot of time to ponder my shame. The newspaper decided to take a break from me, at least until I went back home. Unemployed in a strange land, living in cramped sublets on top of my husband, IVF became the prime focus of my life in a way it had never been before, even though we’d been trying to have a baby for three years. I obsessed about my doctor’s appointments, my daily injections (10 times the hormones I took for fertility in the States) and my expiring biological clock. I also couldn’t help thinking about public humiliation.

I started to feel bad for all the famous people who’d made mistakes and were endlessly flagellated for it: golfer Tiger Woods, cyclist Lance Armstrong, writer Jonah Lehrer, who copped to plagiarism. I even felt surprisingly sympathetic toward Anthony Weiner. True, unlike me, most of these people had intentionally done the acts of which they were accused, but even so, I wondered: Is the price people have to pay publicly for their mistakes fair? Does it ever really bring about remorse? Or does it provoke the opposite reaction, a defensiveness wherein the perpetrator says, “Yes, what I did was wrong, but was it that bad?”

Some crazy nights, when I felt my head unraveling from the drugs and I lay awake trying to will my bloated stomach to pump out more eggs (can one of you please be our baby?) I fleetingly thought about Rihanna. Did the diva even know what had happened?

That question was recently answered for me.

Shortly after we went back to America – the IVF failed, but at least we were home, employed again – the terrible conflict broke out in Gaza. Many celebrities chimed in: Joan Rivers’ feisty pro-Israel video response to TMZ went viral. Javier Bardem and his wife Penelope Cruz’s signatures on an open letter to the European Union calling Israel’s operation in Gaza a “genocide” unleashed a media furor and possible Hollywood boycott, despite her backtracking.

And Rihanna? She tweeted #FreePalestine.

I couldn’t believe it. I had predicted the future. Maybe I didn’t make a mistake, after all. I ran to my computer to watch the video again. Nope. Rihanna did not say “Palestine.” Not then, anyway. But now she had.

My heart went out to this famous stranger. We were linked again, as news reports mentioning her “controversial hashtag” referred to my original mistake at the concert last year. But Rihanna must not have seen any of that; if she had, she wouldn’t have posted #FreePalestine, stepping into the same Middle East minefield I had, which was now blowing up in her face.

For eight minutes, anyway. That’s how long it took her to delete the tweet. She “didn’t realize” she was tweeting, her friend told TMZ. The media quickly moved on: to her see-through dress, her involvement in the Jay Z-Beyoncé triangle, whether her ex, Chris Brown, wanted her back.

I’m glad she was forgiven. If there’s one thing I’ve learned, it’s that we all make mistakes.