The pages had raised over $400,000 for the officer responsible for fatally shooting Michael Brown 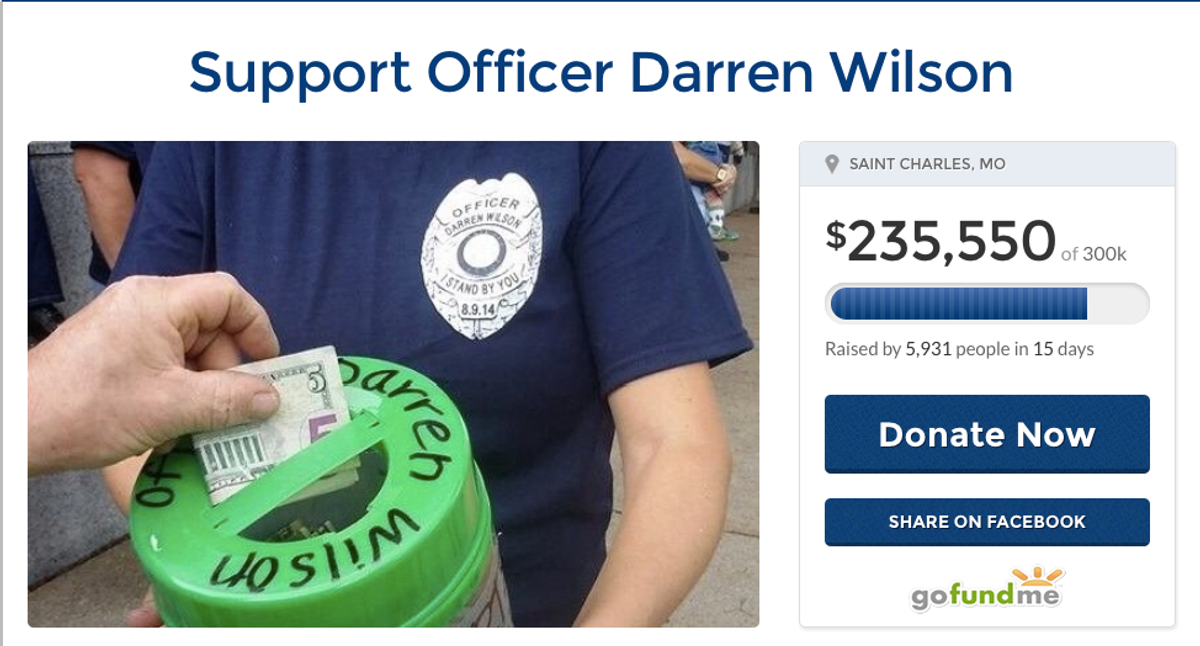 This weekend, two fundraising pages that gathered more than $400,000 in donations for Darren Wilson, the officer responsible for fatally shooting Michael Brown, were suspended by their creators without explanation. It is unclear what the status of the donations is and, in the case of the first anonymous campaign, who might be controlling them.

The first page, "Support Officer Darren Wilson," had raised the most concern because its creator was anonymous and had not received certified status from GoFundMe.

Missouri state Rep. Jeffrey Roorda, a Democrat who is helping to handle Wilson's fundraising efforts, said the creator of that page is a teenage girl from the St. Louis area.

"I think she thought she'd raise a few hundred dollars, and she ended up raising a few hundred thousand dollars," Roorda said in a phone interview on Monday night. After her page got popular, Roorda said, the young woman started receiving "serious threats."

Roorda said he doesn't know how old she is or whether she's a minor; he described her as a "teenage girl," a "young girl."

When The Times relayed Roorda's story to the anonymous accountholder of the page purportedly created by the girl, however, an unidentified administrator responded: "I can tell you I have not worked with or spoken with Rep. Roorda. The information you have been given is false."

The anonymous administrator followed up with Pearce in another email, writing: "We can guarantee you the information is not correct. We cannot control what you may choose to report/publish but we do want you to know when information is inaccurate. We appreciate your understanding regarding this matter."

When one tries to donate to the current campaigns, the site offers the message: "Donations are complete! The organizer has stopped donations."

Meanwhile, the unknown administrator of a Facebook page called "Support Darren Wilson" has written that he (or she) knows why the pages have been canceled but could not share the information. "Attention Supporters !!!" the posting reads. "We cannot exactly tell at this time what is happening. Please .... Please ... several of you have messaged to start a petition ..... Start the Petition against Micheal Browns fund !" (One giant [sic] to that, by the way.) Pearce reports that the Facebook page has deleted several comments that inquire who would handle the money.

Roorda claims that the Facebook page was started by a concerned Texan who reached out wanting to help. "We told him about the young girl's charitable efforts, he put the page up, and has promoted these efforts."