Eat less meat, save the planet -- and yourself

One of the biggest climate solutions also happens to be the healthiest, a new study finds 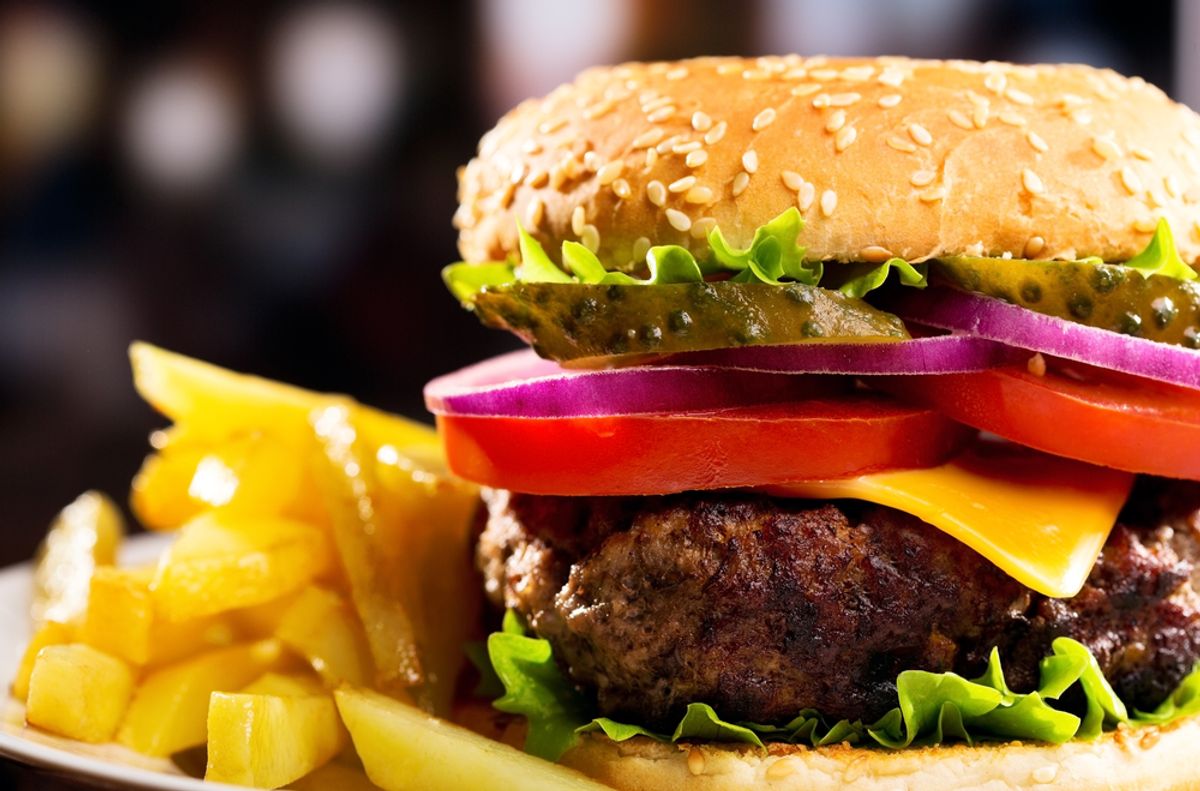 Man-made climate change isn't just about the way we power our homes and transport our bodies -- it's also about the way we feed ourselves. The deforestation and fertilizer use associated with agriculture are a significant source of greenhouse gas emissions, and it's a problem that's going to become increasingly more so as the population grows. It's also becoming increasingly obvious that we can't keep this up.

A new take on the theory of we really can't keep eating this way, guys comes from researchers at the University of Cambridge. By the middle of this century, they write in the journal Nature Climate Change, the world's going to have 9.6 billion mouths to feed. And doing so -- if we continue in the way we grow and consume food now -- will increase emissions up to 80 percent above 2009 levels by 2050, accounting for nearly all of the greenhouse gas emissions we've allotted for the entire global economy (that includes the way we power our homes and transport our bodies) under our current climate plan. Efforts to increase yields in areas like Sub-Saharan Africa, where land use is notably inefficient, would be useful, but even in a best-case scenario wouldn't be enough to stop agriculture, and its negative climate impacts, from expanding.

We can't slow climate change, in other words, unless we change our diets.

Change how? Reducing food waste is an obvious one: At least a third, and as much as half, of the food produced globally currently goes to waste. So, too, is eating less meat. Global meat production hit an all-time high of 308.5 million tons in 2013, a trend that, as demand from developing nations grows, can be expected to rise accordingly. And while cows themselves are bad for the planet (their belches and farts are an important source of methane, a potent greenhouse gas), meat, by virtue of being extremely inefficient to produce, puts a massive additional strain on our agricultural system.

"The average efficiency of livestock converting plant feed to meat is less than 3 percent, and as we eat more meat, more arable cultivation is turned over to producing feedstock for animals that provide meat for humans," explains lead author Bojana Bajzelj. "The losses at each stage are large, and as humans globally eat more and more meat, conversion from plants to food becomes less and less efficient, driving agricultural expansion and land cover conversion, and releasing more greenhouse gases. Agricultural practices are not necessarily at fault here – but our choice of food is."

The good news is that saturated fats from meat and dairy products -- along with sugar, which is also energy-intensive -- have something major going for them: We're supposed to be eating less of them, anyway. The researchers found that eating meat in amounts that are generally recognized by the health community to be bad for you also happens to be bad for the environment. They reference, for example, the recommendations put forward by the American Heart Association, which stress a general reduction in the consumption of red meat and a focus on lean meat -- similarly, a diet benefiting the planet, per the study, would include two servings of red meat and five eggs per week, along with a portion of poultry each day.

Speaking with Salon, Bajzelj explained that the recommendations for meat consumption that could arise from their findings are similar to what you might hear from a health professional: While excessive meat consumption will make it impossible for us to significantly reduce greenhouse gas emissions, eating some meat is perfectly fine; eating less than that, if you so desire, is also OK.

"This is not a radical vegetarian argument; it is an argument about eating meat in sensible amounts as part of healthy, balanced diets," elaborated study co-author Keith Richards in a statement. "Managing the demand better, for example by focusing on health education, would bring double benefits -- maintaining healthy populations, and greatly reducing critical pressures on the environment."

Paul West, co-directer and lead scientist at the University of Minnesota's Global Landscapes Initiative, says the main point of this newest research is not surprising: His own study, recently published in the journal Science, detailed the ways in which improving agriculture while reducing food waste and meat consumption will be necessary for feeding a growing population without destroying the environment in the process. Nonetheless, he told Salon, it "helps advance our understanding of the connections between diet and greenhouse gas emissions." And he points to yet another study, published this summer in the Proceedings of the National Academy of Sciences, that arrived at the same, forceful conclusion. The lead author of that one, Gidon Eshel, summed it up thusly: "Reduce beef whenever possible.”