Fox's new brand of feminism: Time for "women who really want to be women" to be "what God designed them to be"

Conservative women don't want to be objectified or told what to do with their bodies -- kind of like feminists! 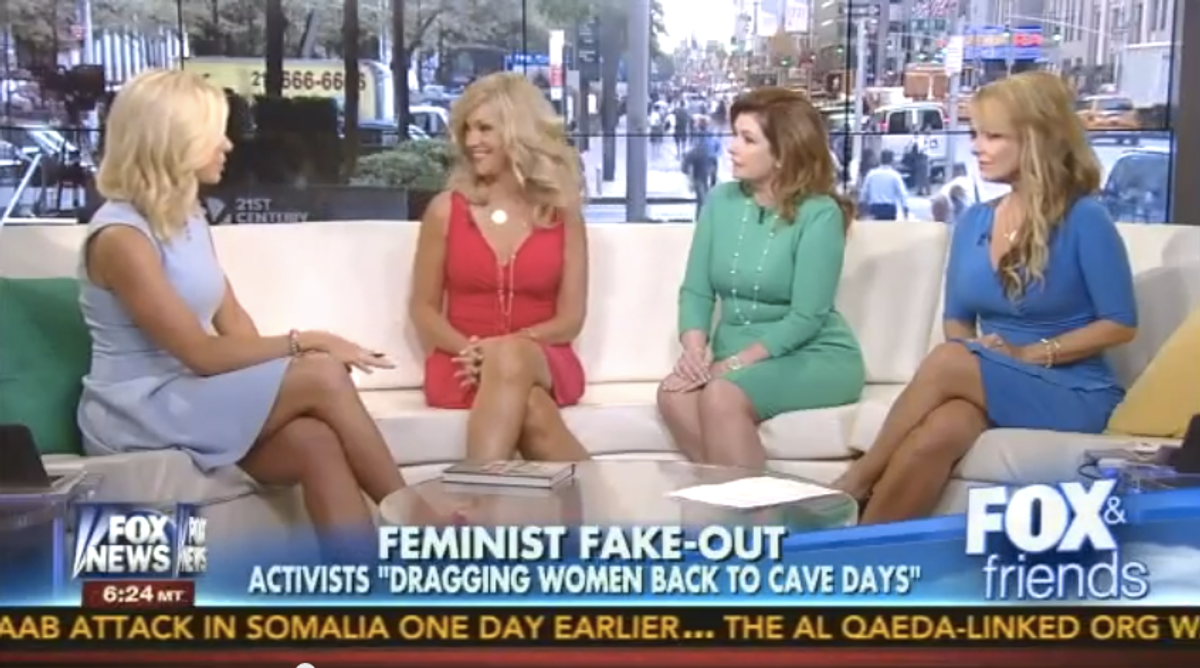 A group of Fox News pundits told the viewers of Fox & Friends on Tuesday that feminism is bad and dangerous because it "sexualizes" women instead of "feminizing" them. The pundits — the three conservative hosts of the Internet series Politichicks — promoted, instead, a “new brand of feminism,” which co-host Dr. Gina Loudon described as a way for “women who really want to be women, who want to be feminine, to be what God designed them to be.”

Honestly, I tried to come up with a better way to introduce the above information, but there's not much I could offer by way of introduction. The Politichicks hosts sat down on Fox News to promote their new book, "What Women Really Want," and they said some inaccurate and nonsensical things about feminism. That is what happened. And now we're going to clear up some confusion.

Calling liberal women "intolerant" for promoting things like having jobs and getting paid fairly for doing them, Politichicks editor in chief Ann-Marie Murrell opened the discussion by asserting that feminism "has nothing to do with empowering women anymore." “We earned the right to vote, we have equality in the workplace,” Murrell explained. “If we don’t, we can fight that on a one-on-one basis. But everything they’re about now is kind of about from the head down. It has nothing to do with women’s brains or their hearts.”

Well, Murrell might be a little bit right: Feminists are concerned about women from the head down, because female bodies are constantly policed, a woman’s right over her own regularly attacked. With legislation proposed and passed in statehouses across the country meant to limit women’s ability to access healthcare or to make their own reproductive decisions, it’s important that someone actually maintain concern for women’s health. And that includes mental as well as physical health — feminists are plenty concerned about women’s heads and their hearts, as we don’t want people to become suicidal because they don’t get a say in what happens from the head down.

Oh, and Murrell is also right that women have the right to vote, which was secured only after feminists fought tirelessly for it less than a century ago. We’re still working on that workplace equality thing, though — women make, on average, 77 percent of what their male colleagues are paid, with the disparities sometimes wider depending on the field. Feminists are also trying to tackle those nasty issues of workplace discrimination and harassment, because employers still disproportionately penalize female parents and/or direct unwanted sexual attention at female employees on a regular basis. Of course, they don’t target stay-at-home moms, whom feminists have managed to shame and stigmatize, according to Murrell’s colleague Morgan Brittany.

“Women do [want to stay home],” Brittany explained. “And they want less government in their lives. They want to make their own decisions, they want freedom to choose for their children, their families. That’s what women really want.”

Well, that’s not even just a little bit right — that’s totally right! Women do want to make their own decisions and choose freely what they think is best for themselves and their families, and they want to do so without the interference of lawmakers and overreaching government restrictions. Feminists have been leading the fight to secure and defend that right, all the while encouraging women to do what they want with their lives. Apparently, the Politichicks missed that part.

“We want no more of this feminists politicizing our bodies, and what happens in our bedrooms,” Loudon said. “That’s all that the feminist movement has successfully done. And we’re here to battle back, and say we know what women really want.”

Well, no, it's not, because there was all that "securing the vote" and "fighting workplace inequality" and "trying every day to have women viewed with respect and dignity" stuff mentioned above. The politicizing female bodies thing might be somewhat right, but here I offer a prediction: Feminists will stop politicizing female bodies when the culture and lawmakers — particularly conservative ones — stop attacking them. When women stop having their privacy threatened and their personal photos leaked online for mass consumption, we might stop talking about sexualization and objectification. We might also stop talking about those things when we no longer have to explain why Sofia Vergara could still be objectified on a spinning pedestal at the Emmys even though she was fully clothed, as the Fox News pundits so helpfully pointed out.

Actually, there are so, so many things that need to happen before feminists stop treating women’s bodies, lives and interests as political issues. (For one thing, it would help if Fox News pundits didn't make light of domestic violence by suggesting that feminists "are like cave women waiting for a caveman to bonk them on the head and drag them into the cave by the hair," as Murrell did.) No wonder even conservative pundits are calling for some sort of movement — even one that warps feminism into something unrecognizable — to fix the myriad issues women face. At least we can all agree that there are problems we need to address.

Watch Murrell, Brittany and Loudon on Fox & Friends below: