How to topple a Tea Party hero: Steve King's Dem challenger unloads on "just how damaging" he is 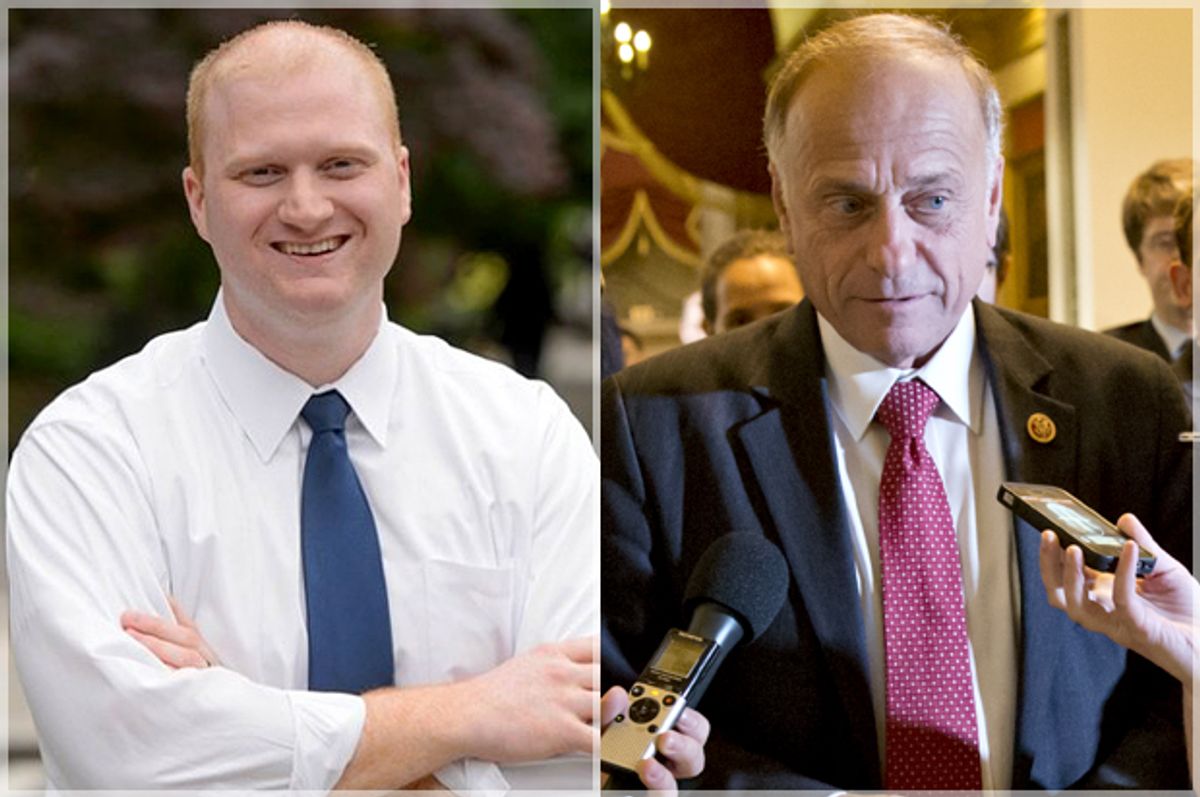 As anyone paying attention to the Democrats' communications strategy for promoting comprehensive immigration reform can attest, what Rep. Steve King lacks in human compassion and social grace is more than compensated for by his incredible ability to make the Republican Party look bad. Indeed, when New York Sen. Chuck Schumer, traditionally one of the chief authors of Dem messaging, tried earlier this summer to portray King as the living embodiment of American nativism — someone who "spews hatred," in Schumer's words — and the guy "call[ing] the shots" when it comes to GOP immigration policy, he had plenty to work with.

Yet despite the ease with which he can be portrayed as an out-of-touch crank, and despite the fact that he hails from Iowa, a state that went to the Democrats in three of the past four presidential elections, Rep. King has rarely had to worry about alienating voters in his district and imperiling his career as a fire-breathing gadfly in the House. Even during 2012, an unexpectedly good year for Democrats that saw Latino voters especially motivated to send a message to a GOP they felt was overly controlled by xenophobes like King, the Tea Party hero cruised to reelection, racking up 53 percent of the vote.

But Jim Mowrer, the native Iowan, veteran and former Pentagon official who is running against King as the Democratic Party's nominee, is hoping this year is different. Alongside a strong résumé, a compelling life story — one that just so happens to show the necessity of social insurance (more on this below) — and the backing of the Democratic Congressional Campaign Committee, Mowrer hopes 2014 will be the cycle when the increasingly left-wing tilt of the Iowa electorate finally affects voters in the state's 4th Congressional District, where a man who said all of these ridiculous things is still king. Our conversation is below, and has been edited for clarity and length.

Running for Congress is such an ordeal, especially when you’re going up against an incumbent. What made you decide you wanted to go through with it, despite being the underdog?

Well, this is where I’m from; I grew up on a farm here in the district. I’ve seen firsthand, when I was working at the Pentagon, how broken this Congress is — and that’s what Democrats and Republicans agree on right now, that Congress is broken and Washington isn’t working. So I don’t think it’s really about party at this point. I think it’s much more damaging … this cycle to be an incumbent.

How much was your decision informed by the fact that Steve King is, well, Steve King? Or do you think it’s not a problem that has as much to do with any one member of Congress, and therefore you were going to get into the race no matter who your opponent was going to be?

I think we all have to take personal responsibility for the future of our communities and our country, and that’s what I’ve always done. Whether it was serving in the Iowa National Guard and in Iraq, or serving at the Pentagon, my career has been about service, and this was another opportunity for me to serve.

And, again, I had a front-row seat at the Pentagon to see how broken this Congress is — and I wanted to do my part to change that.

Could you talk a bit more about what you saw at the Pentagon? What’s an example of the kind of dysfunction you’re thinking of when you talk about your front-row seat?

The work I did at the Pentagon was to establish the Army Office of Business Transformation, and what we did there was to reform some of the Army’s business operations and make them more efficient and effective. So I had to work with Congress — the House and the Senate and the Armed Services Committee — and saw many times when we could not take action that was needed because of extreme partisan differences or parochial interests.

Do you think your opponent, congressman King, deserves any special credit (or blame) for the level of stasis in Congress right now? Or is he just one among many, someone without any particular influence?

He is someone who pushed for the government shutdown last fall. When it ended, he said he wanted it to keep going. I think he’s someone who’s not interested in finding any kind of solutions or making Congress work. He’s much more interested in driving a partisan divide. His answer to everything is no. He does not want to get anything done. He wants to be an obstructionist. He’s said he wants to be a better obstructionist and he wishes there were more obstructionists like him in Congress; and that’s exactly what the people of Iowa don’t want right now.

I’m sure there are plenty of issues about which you and Rep. King differ, but what comes to mind when you think of areas where the difference between you two is the most pronounced?

Well, again, there is a stark contrast between us on almost every major issue and, frankly, almost every single issue.

But the biggest contrasts are probably when it comes to Social Security. When I was 7, my father was killed in a farming accident, and Social Security is the only thing that kept my family from falling so far down that we couldn’t get back up. So I believe in strengthening and protecting Social Security, while he voted to raise the retirement age to 70, and has said he wants to actually raise it to as high as 75 (because Wal-Mart will hire people until the age of 74). That’s a stark contrast.

On minimum wage, he’s said he doesn’t believe there should be a federal minimum wage, that it should drift away. I want to raise the minimum wage to $10.10, as Sen. Harkin has proposed. But I think the biggest difference between him and me is that I want this country to be successful no matter who gets the credit, no matter who the president is. I’ve served under a Republican president and I’ve served under a Democratic president; I just want this country to be successful.

When you say you want to strengthen and support Social Security, does that mean you won't support any reform that ultimately leads to lower benefits? I ask because what we've often heard from activists who are worried about the federal budget is that they, too, want to protect Social Security — but their version of protection can end up meaning cuts. So, just for my clarification, you're saying you would not support any plan that led to lower benefits?

If you're referring to plans like chained CPI or raising the retirement age, I am dead-set against those. I would not support either under any circumstances — and that's where the people of Iowa's 4th Congressional District are on this.

Social Security is one of the most successful government programs that's ever existed. It is overwhelmingly popular. It provides income security for 58 millions seniors, as well as people with disabilities and people who receive survivor benefits. Half of the seniors in this country would live in poverty without it. So we need to protect Social Security, which needs to be maintained at its current level and needs to be fully funded.

Right now we have a cap on the amount [of income that's taxed for Social Security]. It stops at $117,000; so you have millionaires and billionaires who are not paying into Social Security beyond that cap ... When I make my case to voters, a lot of people aren't even aware that the cap exists — so [lifting the cap] is a very, very good first step.

I think the issue most of us think of when we think of Rep. King is immigration, largely due to his rigid yet passionate opposition to comprehensive reform (as well as his unfortunate habit of saying offensive things to and about immigrants' children). How do your views on the subject differ from his? Is there anywhere you agree?

I think the only thing that I could point to that we agree on — and it’s in principle; it’s not over tactics or about what’s the right approach — is that I believe in securing the border, and obviously congressman King believes in securing the border. But we have different approaches as to how we think it should be done.

I believe that [the House] needs to pass the Senate-passed immigration reform bill and put 20,000 additional border agents on the border. That’s what we need to get the job done. He’s someone who does not believe in fixing the problem in any way. He is against any kind of reform, and he is very much to blame for the problems that we’re seeing now, because he’s held up any progress on getting comprehensive immigration reform done.

He goes around saying he’s not happy with the way the system currently is, yet he’s the one fighting progress on that front.

Rep. King has a tortured relationship with GOP leadership in Washington – Speaker Boehner allegedly has called him an "asshole" on at least one known occasion — but have you met anyone on the campaign trail who described herself as a Republican but expressed concern that King has no clout with his fellow Republicans in Congress?

What I think people have realized is just how damaging congressman King is, not only to the future of Iowa and the future of our country, but also for the Republican Party. He really does not meet what the definition of a Republican used to be; he really is a Tea Partyer. When he says government is broken, he's not complaining — he's bragging about that. He doesn't want the government to function. He doesn't believe in good government; he believes in no government.

I've got a lot of support from a lot of Republicans. I have a very bipartisan background, focused on solutions. I've served my country in non-partisan ways. And I'm willing to work with anybody, regardless of what letter's next to their name, who believes in working together to find solutions.

Speaking of your non-partisan service, and given that you served in the country, I'd like to know what you think of our current policy in regard to ISIS in Iraq? Are you worried at all that we may be at risk of succumbing to mission creep and suddenly find ourselves once again at war in the country, for what would be the third time in the past 30 years?

I spent years in Iraq, both in uniform and as a civilian doing intelligence work, and I'm very concerned with what we're seeing now. I can tell you from firsthand experience that, knowing the training and the equipment that we provided to the Iraqi security forces, they should be taking responsibility for the future of Iraq.

They have a major political problem. It's good that Prime Minister al-Maliki is moving on and they have new leadership, but the Iraqis have to take responsibility for their country. I think that the United States should be there to support them, in a very limited capacity, and I think that very limited humanitarian and military assistance is something that can be helpful.

But, again, the Iraqis were left with the capacity to provide for their own security, and that's what they need to do. It's up to them.