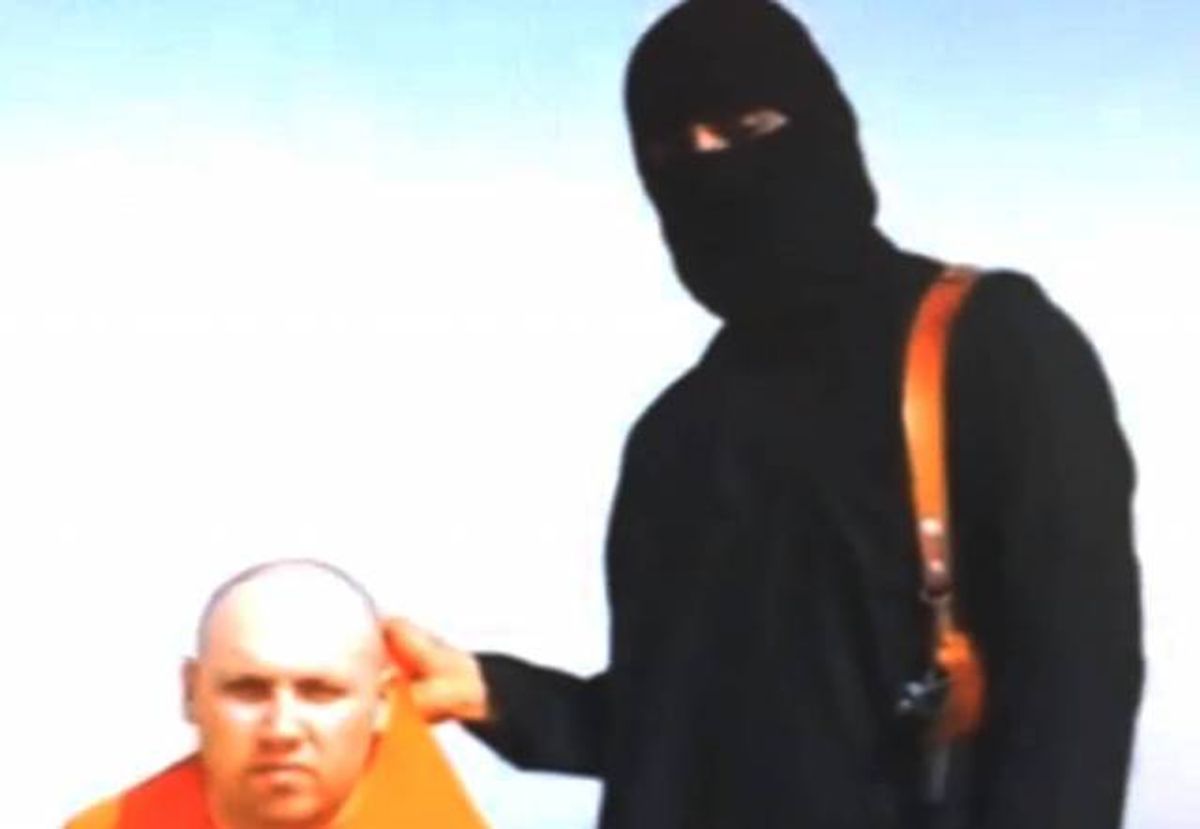 This still image from an undated video released by Islamic State militants on Tuesday, Aug. 19, 2014, purports to show journalist Steven Sotloff being held by the militant group. (Associated Press)
--

I honestly don’t know what President Obama should do about the growing strength of ISIS.  It’s horrifying to see the cruel, cultish group gathering strength, and it's also appalling to see neocons braying for more bloodshed. In a just world, Sens. John McCain and Lindsey Graham would be sidelined from foreign policy respectability for their ridiculous and strategy-free Saturday Op-Ed.

But if I know anything for certain about the situation, it’s that the tragic execution of Steven Sotloff, like that of James Foley, should change nothing about what the U.S. does in Syria.  Predictably, Fox News analyst K.T. McFarland is blaming Obama for the journalists’ murder. Iraq war cheerleader Bill Kristol declared the president’s failure to act after Foley’s killing “childish” and “pathetic.”

The right will likely use the death of another journalist they don’t care about to batter the president and call for more death. But Democratic hawks may do the same, albeit more subtly. We shouldn’t let them.

It seems as though the strategy of ISIS here is to bait the U.S. into action, by relying on the most noxious stereotypes about Americans. Clearly they believe that we're sentimental, selfish and fairly stupid brutes who won't lift a finger to prevent the death of hundreds of thousands of Syrians or Iraqis, but will reliably be roused to overreaction by the murder of two of our boys, especially if it's captured and packaged this crudely.

Again, these murders are unspeakable tragedies worthy of every condemnation imaginable. But nothing about them changes anything about the situation in Syria, or what we should do about it. What have we learned here? Did we not know ISIS had medieval killing technology and 20th century video equipment? That they were cruel enough to behead journalists? Did we not realize that the part of Syria where Foley and Sotloff were captured -- between 13 and 24 months ago, by the way, not recently -- was a lawless shit show? Are we really pretending to be surprised and outraged that there are places in the Middle East where it's not safe to be a journalist now, to use our veneration of the First Amendment to say, This shall not stand?

Peter Beinart’s debunking of the embarrassing McCain-Graham manifesto for action sums up our tough choices there as well as anything else.

One reason Obama isn’t bombing in Syria yet is that he’s not clear on what the goal would be. McCain and Graham are. “ISIS,” they write, “cannot be contained.” Why not? Hasn’t the U.S. been containing al-Qaeda—ISIS’s estranged older brother—for more than a decade now? But the two senators don’t pause to explain. “It must be confronted,” they declare. What does that mean? If the U.S. is bombing ISIS in Iraq, aren’t we confronting the group already?

McCain and Graham later clarify: The goal is to “defeat ISIS.” Excellent—how do we do that? 1) “It requires an inclusive government in Baghdad that shares power and wealth with Iraqi Sunnis.” OK, Obama just toppled a prime minister in service of that goal. But there are those decades of dictatorship, brutality, and sectarian slaughter to overcome. 2) “Mobilize America’s partners in a coordinated, multilateral effort.” OK, but those “partners”—which include pro-Muslim Brotherhood regimes like Turkey and Qatar and anti-Muslim Brotherhood ones like Egypt and Saudi Arabia—are jockeying fiercely with one another for influence across the Middle East. Not to mention the fact that they don’t listen to us all that much anymore. 3) Bring “an end to the conflict in Syria.”

Of course, they don’t say how. The expansion of ISIS may ultimately require a military response – although no one has publicly laid out a strategy that’s more convincing than the impotent Power Point stylings of McCain and Graham – but not because of these awful killings.

My heart goes out to the families of two men I didn't know, but whose work I respect. I can't presume to know what Sotloff or Foley would have wanted.  Judging from their work alone, they went after complexity, not easy answers. It’s hard to imagine them endorsing an easy answer now -- especially one that almost certainly will result in more Syrian deaths, and more converts to anti-American ideologies of cruelty and repression.