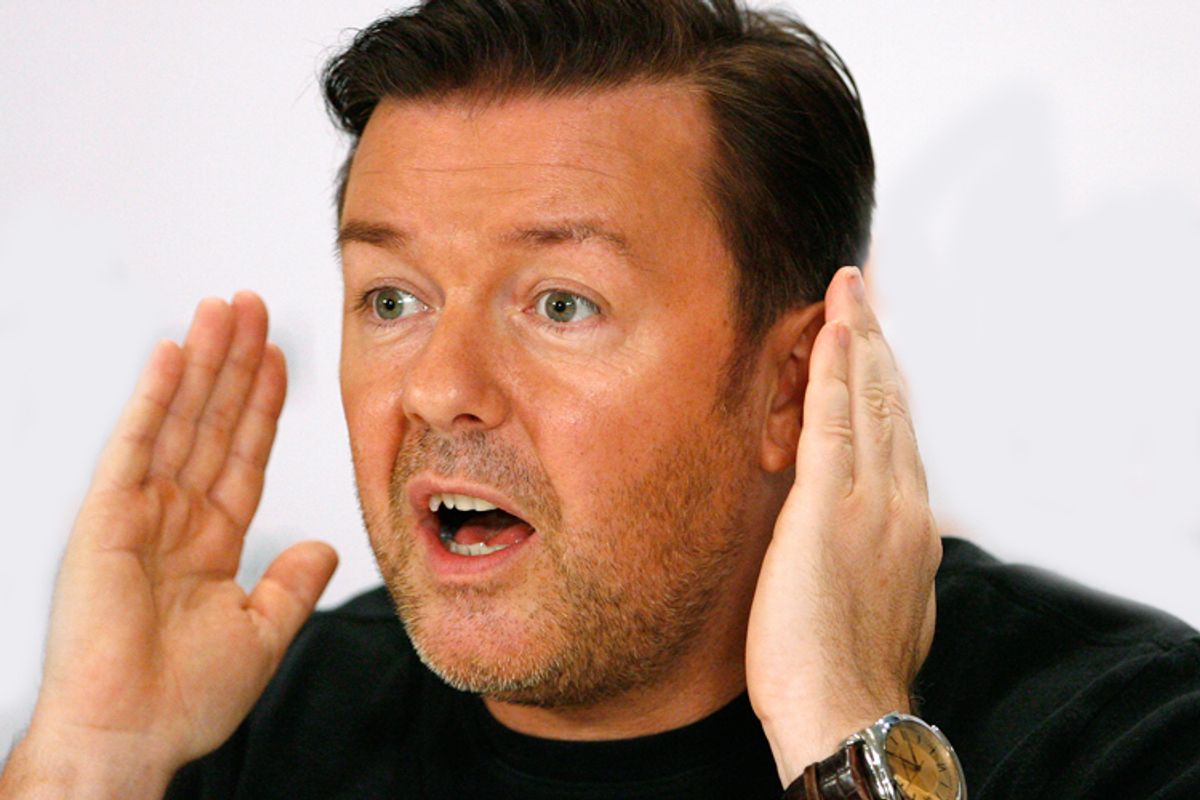 Well, that didn't take long. On Monday, comedian Ricky Gervais found himself in hot water after he posted a response to the massive leak of several celebrities' hacked nude photos over the weekend, effectively taking the lead in the horrible-but-all-too-predictable victim-blaming that tends to follow such incidents. In a tweet he later deleted, Gervais offered some dangerous advice for celebrities who would like to retain their privacy, writing: "Celebrities, make it harder for hackers to get nude pics of you from your computer by not putting nude pics of yourself on your computer.” (The Daily Dot has a screenshot of the tweet.)

Gervais might have deleted the comment, but he still managed to add insult to injury. The actor carried on with a series of insensitive tweets, including another later deleted post that read, "Dear easily offended people, don't be. Hope that helps. Have a great day :)." He also attempted to explain his "humor" with a series of non-apologies:

Making a joke about a thing doesn't mean you condone that thing.

Of course the hackers are 100% to blame but you can still makes jokes about it. Jokes don't portray your true serious feelings on a subject

The actor was quickly joined in his victim blaming by Fox News contributor Steve Doocy, who issued a blanket "nobody take naked pictures ever, ever, ever" statement on Tuesday's edition of Fox & Friends. "Maybe the message is: don’t take naked pictures of yourself,” Doocy said. “There’s this thing called a mirror. If you want to see yourself naked, look in the mirror, don’t take a picture of yourself.”

Well, no, that’s actually not the message to take away from this incident, because that would assume that the celebrities who had their privacy violated after people made repeated, concerted efforts to get past security measures are somehow to blame. To put it simply: The celebrities in the photos are not to blame; the people who leaked the photos are. What the hackers did was, indeed, a “bad thing,” as Gervais noted — but so too is pointing fingers at victims.

See, Gervais got (more than) one thing wrong in his non-apology: Victim blaming is one of those “actual bad things” that people should spend energy stopping, because it’s an act that reinforces a dangerous cultural mentality. It perpetuates a social climate in which the other “actual bad things” to which Gervais presumably refers — rape, sexual assault and domestic violence, to name a few — are carried out with ease. Asserting that those who have their privacy or personal integrity violated could or should have taken measures to avoid victimization assumes that such violations are inevitable or par for the course. They aren’t. They are bad things that people actively do to harm others. Those people — not Jennifer Lawrence or Ariana Grande or any one of the many others who had their accounts hacked and their photos leaked online — are the ones to blame.