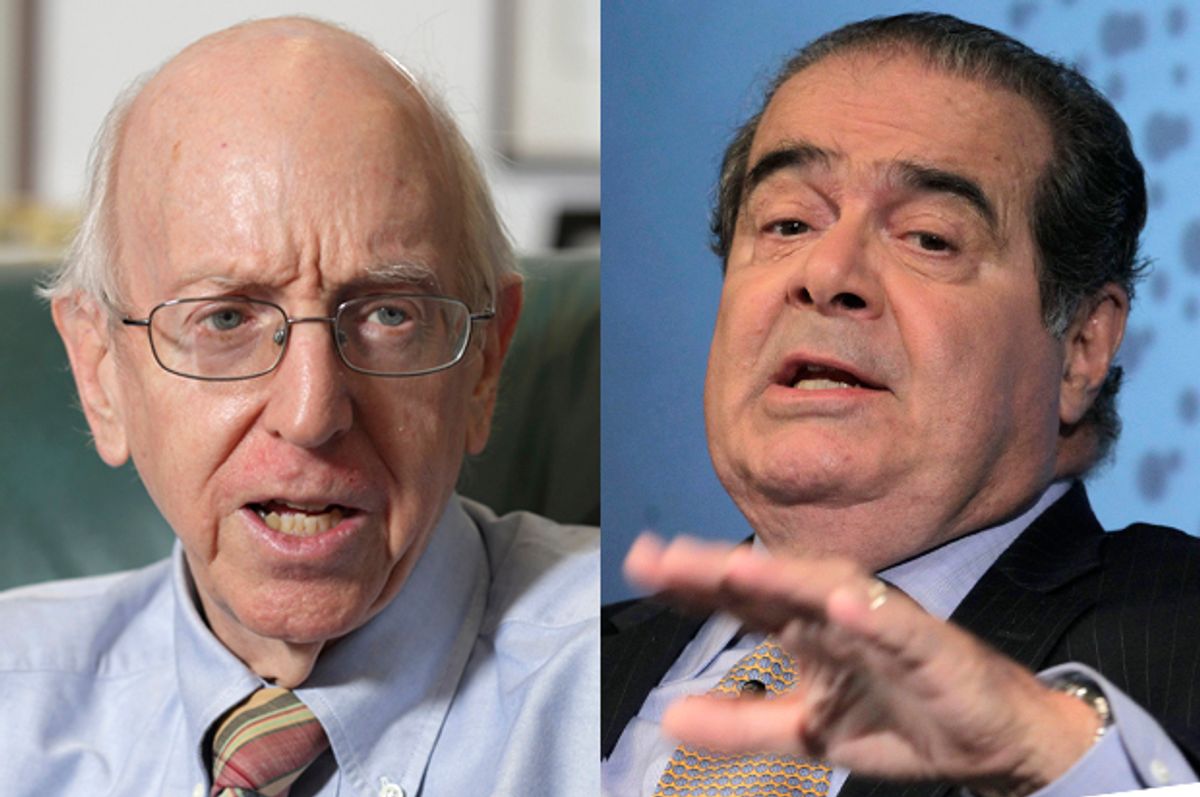 Judge Richard Posner has written nearly 40 books, hundreds of articles and thousands of judicial opinions. He is, by far, the most cited legal scholar alive today (probably ever). Nominated by Ronald Reagan, he sits on the United States Court of Appeals, just below the Supreme Court. He has publicly feuded with Justice Antonin Scalia over how judges actually decide, and should decide, cases. And, over the last year, he has spoken truth to power in three high-profile cases all likely to be decided by the Supreme Court.

On issues of abortion, same-sex marriage and religious objections to Obamacare, Posner said exactly what needed to be said with honest, unequivocal and, to some perhaps, startling clarity.

The University of Notre Dame didn’t want to provide certain forms of required contraception to its students and employees so it went to court seeking a religious exemption. The bizarre thing about the case is Notre Dame was already exempt. What it wanted was not to fill out the form that would have guaranteed the university an exemption. Notre Dame claimed, to most people’s disbelief, that filling out the short form and asking for the exemption was itself a substantial burden on its religious exercise.

Posner would have none of it. At the oral argument, he took a harsh tone with the lawyer for Notre Dame who refused again and again to answer directly how filling out a piece of paper could possibly be a “substantial burden on religion.” Becoming more and more frustrated, Posner eventually asked the lawyer to “stop babbling,” and “stop fencing,” eventually warning him that “if you don't cooperate with me, I'm not going to let you continue your argument." The judge’s frustration stemmed from his perception that Notre Dame’s claims had no merit, and the lawyer was simply bobbing and weaving.

Eventually, Notre Dame lost (the court of appeals uses three-judge panels) and the final opinion written by Posner said this: “The novelty of Notre Dame's claim--not for the exemption, which it has, but for the right to have it without having to ask for it--deserves emphasis ... What makes this case and others like it involving the contraception exemption paradoxical and virtually unprecedented is that the beneficiaries of the religious exemption are claiming that the exemption process itself imposes a substantial burden on their religious faiths ... The process of claiming one's exemption … is the opposite of cumbersome.  It amounts to signing one's name and mailing the signed form to two addresses.”

From the oral argument through the decision, Posner seemed shocked at the idea that Notre Dame would challenge an exemption given to it by the federal government on the basis that it, gasp, had to ask for it. He couldn’t be more right.

A few months later, Posner, again along with two other judges, reviewed the validity of a brand-new Wisconsin law requiring doctors who perform abortions to have admitting privileges at nearby hospitals. The law, if valid, would make it much more difficult for clinics in Wisconsin to provide abortion services because, of the four clinics in the entire state that perform abortions, two would have been shut down.  Although the case came to the court on a preliminary motion (an emergency stay had been granted by the lower court), Posner took the opportunity to demonstrate why he thought the plaintiffs would eventually prevail.

In affirming the stay, Posner noted that “no documentation of medical need for such an admitting privileges requirement was presented to the Wisconsin legislature when the bill that became the law was introduced.” He also noted that no “other procedure performed outside a hospital, even one as invasive as a surgical abortion (such as a colonoscopy) …  and even if performed when the patient is under general anesthesia … is required by Wisconsin law to be performed by doctors who have admitting privileges at hospitals within a specified, or indeed any, radius of the clinic at which the procedure is performed.”  Posner added that the risks of colonoscopies are three to six times greater than the risks of abortions (yet doctors can perform them in outpatient centers without having admitting privileges), and that, based on a report by the state, out of 1,192 abortions that were reported, there were only 16 complications, a rate of less than 1 percent.

Throughout the opinion, Posner implied, though didn’t go as far as to conclude, that the obvious purpose of the law was not to further women’s health but simply to make abortions more difficult to obtain. For example, on the issue of the timing of the law, he said “it has been 40 years since Roe v. Wade … was decided, legalizing (most) abortion throughout the United States, and it could not have taken the State of Wisconsin all this time to discover the supposed hazards of abortions performed by doctors who do not have admitting privileges at a nearby hospital.”

Posner saw through the litigation and the alleged health benefits of the admitting privileges law. His opinion will make it virtually impossible for Wisconsin to win this case if and when it returns for a final disposition, and rightfully so.

Finally, Posner was recently one of three judges to hear oral argument in a lawsuit challenging Wisconsin and Indiana’s ban on same-sex marriage. Although the case has not yet been decided, there is no question how Posner will vote. When the lawyer for Wisconsin justified the ban based on “tradition,” Posner responded by saying "It was tradition to not allow blacks and whites to marry — a tradition that got swept away." He also said the ban stems from "a tradition of hate ... and savage discrimination" against same-sex couples.

During the argument, the state argued that the purpose of the ban had something (ill-defined) to do with procreation and biology. Posner responded, "It's arbitrary. You're allowing all these sterile people to get married. Why are you doing that if you're so concerned with procreation? Why do you let them?"

Posner also asked the state’s lawyer about the harm to children of same-sex couples denied benefits that children of opposite-sex couples receive and further chided the lawyer by saying that "You are concerned with the unfortunate children produced by accidental births … many of these (unintended children) are adopted by same-sex couples, and these children will be better off if their parents can marry, no? Isn't that obvious?"

Posner thought it was “obvious” that filling out a form cannot possibly be a substantial burden on religion, that the state of Wisconsin and Indiana didn’t care one bit about women’s health when it decided to require doctors who perform abortions to have admitting privileges at hospitals, and that bans on same-sex marriage have little to do with permissible concerns Wisconsin may have about marriage and children and everything to do with unlawful and arbitrary discrimination. As a matter of law he is right about all three cases. As a matter of politics, we will have to wait until the Supreme Court decides to have our final answers.