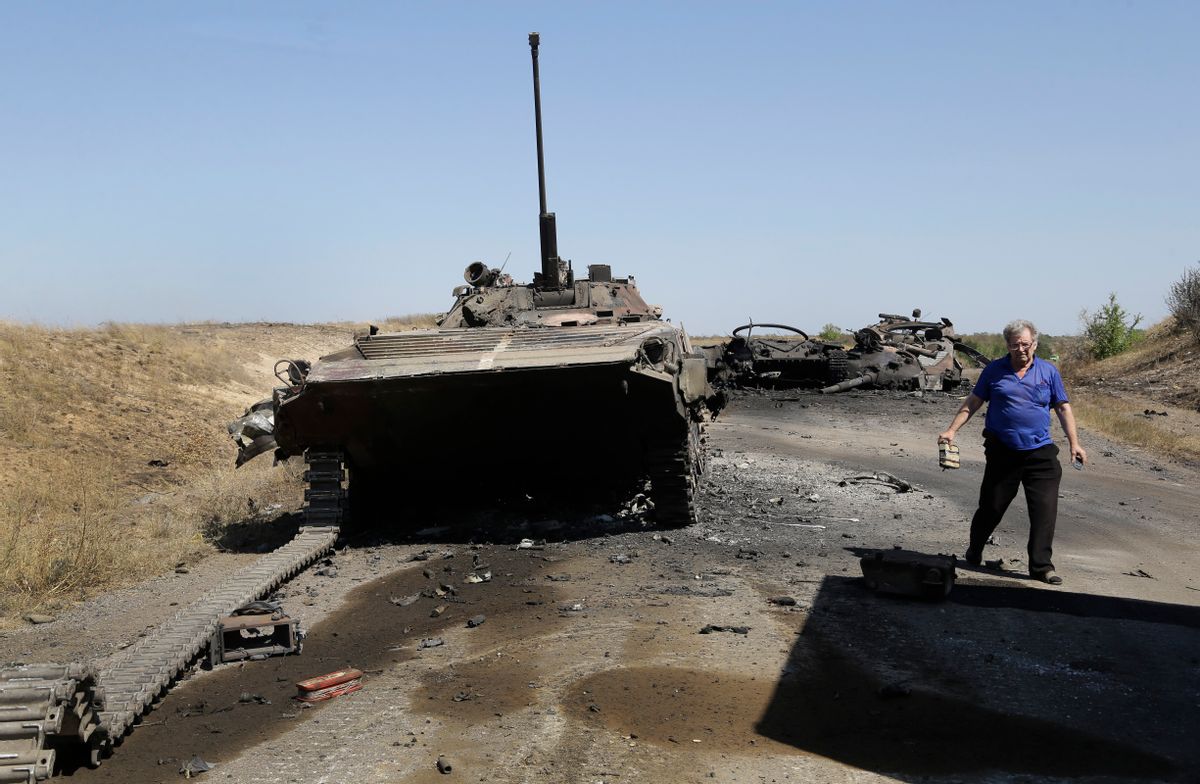 A column of destroyed Ukrainian military vehicles are seen near the village of Novokaterynivka, eastern Ukraine, Tuesday, Sept. 2, 2014. Ukrainian troops have over the past week suffered a string of major military losses in their offensive against Russian-backed separatist rebels, losing large swathes of territory and having hundreds of soldiers captured. (AP Photo/Sergei Grits) (AP)
--

Steven Sotloff is apparently executed by a fighter with the Islamic State, the extremist group that has conquered wide swaths of territory across Syria and Iraq. The militants killed reporter James Foley two weeks ago.

The U.S. president and Western allies will approve plans to post at least 4,000 troops and military equipment in Eastern Europe to bolster nervous member states near the Russian border.

The separatists have been successful against government troops in the last 10 days just as columns of Russian tanks and armored vehicles have been seen crossing the border.

Three U.S. flights made unscheduled landings in the past eight days after passengers got into fights over reclining seats.

5. WHY NUDE PHOTO HACKS MAY CONTINUE TO HAUNT CELEBS

Jennifer Lawrence and other stars must remain vigilant in tracking down new online sites that may post the pictures leaked by cyber pirates.

Doctors Without Borders, which has treated more than 1,000 patients afflicted by the deadly virus in West Africa since March, is completely overwhelmed by the disease, the organization's president says.

Removing both breasts to treat cancer affecting only one side doesn't boost survival chances for most women, compared with surgery that removes just the tumor, a study of 200,000 women suggests.

8. HOW PLAYING AN INSTRUMENT CAN MAKE BETTER STUDENTS

Researchers have found that many such outbreaks of arctic cold happened a few months after unusually low sea ice levels in the waters off Russia.

Jim Irsay has also been suspended for the first six games of the season, after pleading guilty to driving while intoxicated and being under the influence of painkillers.