Filling in for Bill O'Reilly, the Fox News regular and radio star carries his race-baiting torch with aplomb 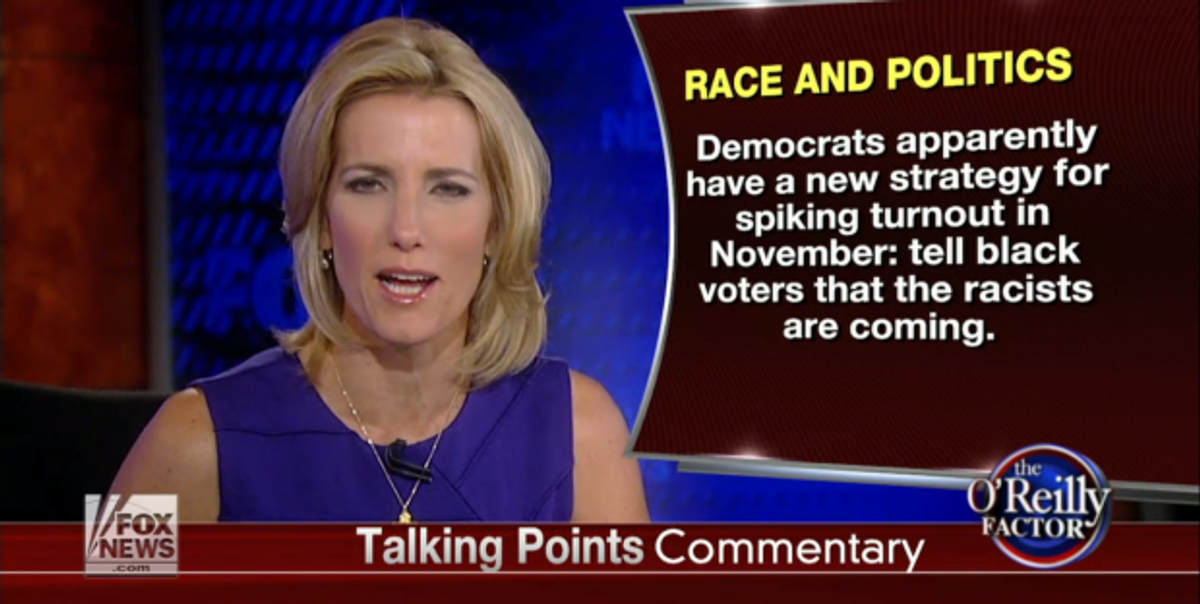 Swiftly dismissing the possibility that the political party overwhelmingly supported by black Americans might have a legitimate and principled reason for taking racism seriously, Ingraham explained to her audience that "Since Obama's numbers are in the toilet ... Democrats have scrambled to find some edge in the upcoming midterms."

Euphemistically describing an incident in which an unarmed African-American teenager was shot to death by a white police officer as "the use of force," Ingraham went on to complain that Democrats had no right to bring race into the conversation. After playing a clip of Rep. John Lewis urging blacks to get more involved in the political process, Ingraham sneered that the civil rights movement hero was "echoing what everyone from Al Sharpton to Attorney General Eric Holder believe: that African-Americans in this country still live in a racist, evil place."

In an awkward transition attempting to rebut this straw-man premise, Ingraham then noted that a lot of black people voted for President Obama in 2008 and 2012, probably because they thought he was the candidate more likely to implement policies that would improve their lives. "But by all relevant indicators," Ingraham continued, "the lives of most black Americans haven't improved much since the inauguration of Barack Obama in 2009." (And if you're noticing that this is a total non sequitur, it's most likely because you're not Ingraham's intended audience.)

"Rather than change policy and turn things around for everyone and actually improve people's lives," Ingraham said, "the Democrats go back to the politics of division. So if you don't go to the polls to vote Democrat in November, your son could be the next Michael Brown, the next Trayvon Martin. How cynical, how counterproductive, and how revealing!"

To be fair, we're inclined to agree with Ingraham in one respect: Her seeing efforts to register people of color to vote (by pointing out the negative consequences of living under a government that does not recognize or reflect their interests) as divisive and cynical is quite revealing. But not of Democrats or their supporters.