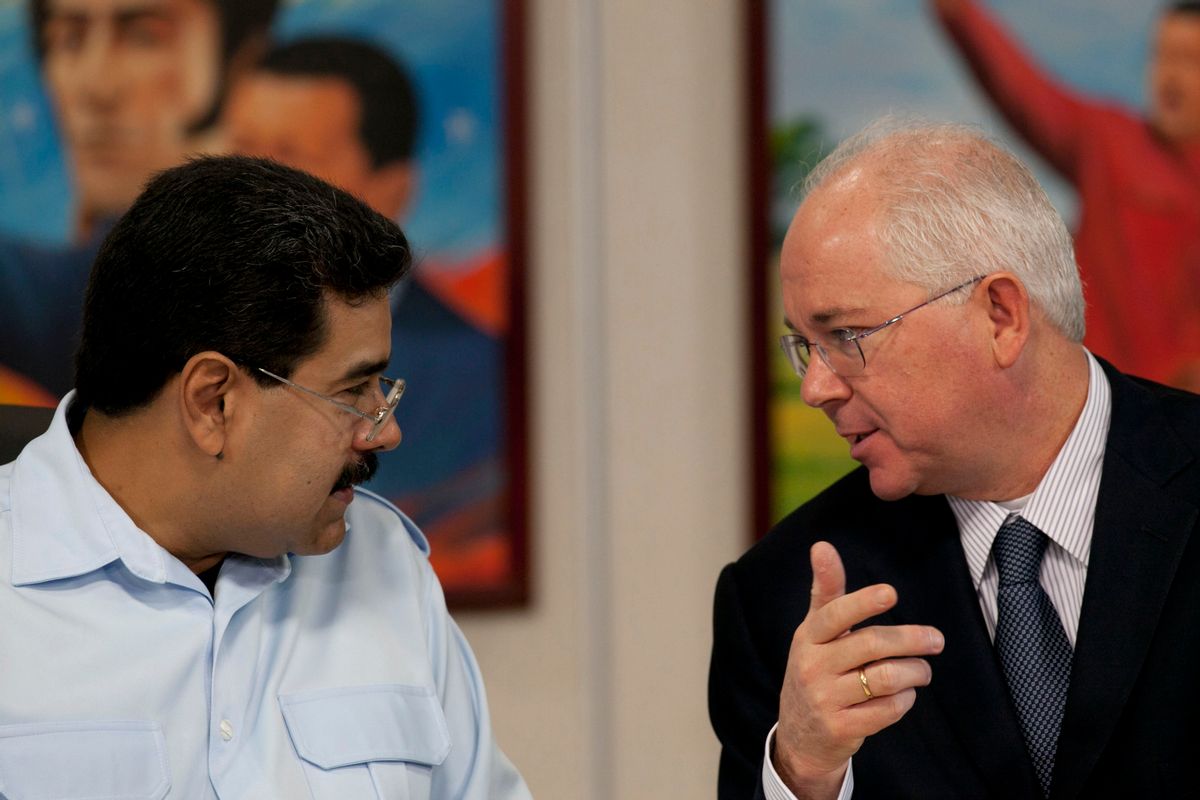 FILE - In this Nov. 15, 2013, file photo, Venezuela's President Nicolas Maduro, left, speaks with his Oil Minister Rafael Ramirez before the start of a press conference at Miraflores presidential palace in Caracas, Venezuela. President Maduro has replaced on Tuesday Sept. 2, 2014, Venezuela's longtime oil minister and economic czar as part of a cabinet shakeup sidelining the most-prominent voice within his administration for much-needed reforms to address the country's economic crisis. (AP Photo/Ariana Cubillos, File) (AP)
--

Rafael Ramirez had served as oil minister and president of the state-run oil giant PDVSA for more than a decade, earning a reputation as a loyal servant of the late Hugo Chavez's socialist revolution. He saw his power within the government expand dramatically a year ago when Maduro tapped him as vice president for economic policy, giving him effective oversight of everything from the country's foreign currency reserves to the price of gasoline.

As part of what Maduro called a new assignment for the 50-year-old engineer, Ramirez was designated instead foreign minister and given a newly-created position of vice president for political sovereignty.

Maduro's cabinet shuffle Tuesday night was widely-anticipated after his ministers collectively offered up their resignations two weeks ago. But few Venezuelans expected such a dramatic demotion for Ramirez, who looked on long-faced as the president thanked him for his past service in front of an audience of top military and civilian officials at the presidential palace.

Ramirez's loss of responsibility for the world's largest oil reserves and 95 percent of Venezuela's export earnings means investors who had been hoping that recent economic pain would spur a pro-business tilt will lose a potential ally.

In recent weeks Ramirez had been promising policies that in many ways took distance from the past 15 years of increasing state control over the economy. These included an unpopular plan to raise gas prices — the world's cheapest — and unify three official exchange rates that have been fueling the bolivar's freefall in the black market, bleeding currency reserves and stoking inflation running over 60 percent.

While hardliners and military insiders were cold to such moves, Ramirez had the ear of Maduro, knew the ins and outs of the oil-dependent economy like nobody and from PDVSA had carved out a power base from which many believed he could execute a much-needed overhaul.

In the end, Maduro may have calculated such moves were too costly politically — at least for now. Opposition protests in the spring left 43 dead by the official count; Venezuela's bolivar has lost more than half its value in the illegal black market during his 16-month presidency; and essential items such as soap and sugar have become impossible to find with any regularity.

Recent polls show that support for Maduro has slipped below 40 percent.

During the three-hour televised address, Maduro provided scant details of the economic reforms that he's promising for weeks, a sign to analysts that the crisis will continue unabated.

Instead, the president focused on what he called five "revolutions" in diverse areas to bring the government closer to its supporters among the poor and boost productivity.

"We must assume this new phase with strength," he said.

Ramirez, who was expected to make a rare visit to Wall Street this month to meet with foreign investors, will be succeeded as head of PDVSA by engineer and career oilman Eulogio Del Pino. Del Pino has sat on the PDVSA executive board for more than a decade, and most recently served as vice president of exploration and production.

Asdrubal Chavez, an engineer and cousin of the late president, will step in as oil minister, while current Finance Minister Rodolfo Marco Torres, a low-profile army general, will take over Ramirez's job as top economic policymaker.