The post-VMAs pop cultural comedown: How did we go from "FEMINIST" to the "Fappening"?

A week after Beyoncé's performance, the entertainment world has never seemed like a scarier place for women 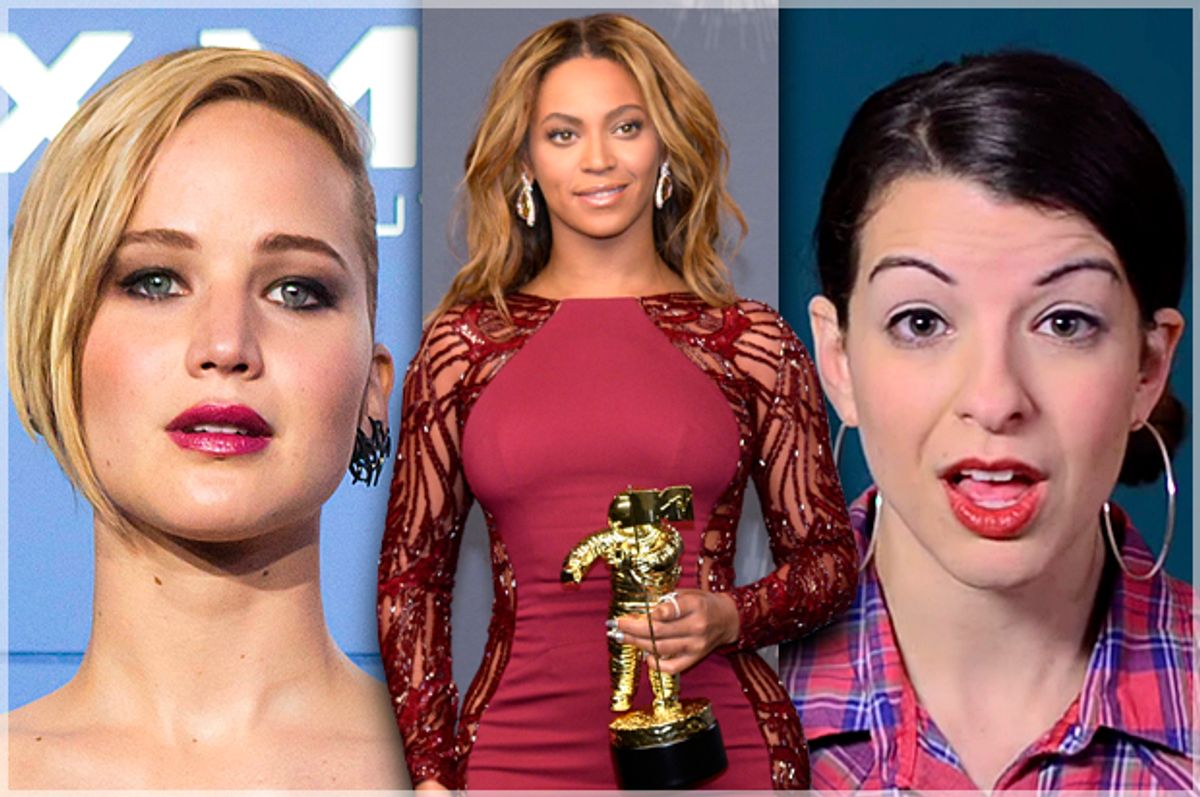 Think back, if you will, to two Sundays ago, when the MTV Video Music Awards ended with Beyoncé posing decisively in front of the words “FEMINIST” rendered in glowing letters 8 feet tall. Many feminists felt the force of the display like a sonic boom: The fact that the biggest superstar in the world was finally, unequivocally declaring her allegiance to a movement long reflected in both her lyrics and her attitude was a confirmation that the mainstream is due for a redefinition of the F-word. Many others, of course, saw it as just, well, a display. But whatever you might think about Beyoncé’s performance itself, the week since has perfectly — if dishearteningly — illustrated the distinctly shaky balance of women’s autonomy and power within American popular culture, and the unbridled resentment that accompanies women who speak up about the injustices and invasions of privacy that go along with it.

On Tuesday, Anita Sarkeesian released the latest in her crowd-funded series of videos titled “Tropes vs. Women in Video Games.” By Wednesday night, the critic had been forced to call the authorities and leave her home, thanks to “specific and credible” threats of sexualized rape and murder delivered via Twitter message.

Anyone who’s followed the Sarkeesian saga knows that the media critic has had an angry-geek target on her back since the announcement of the project back in 2012. To nutshell what’s become a sprawling story: Sarkeesian undertook a project that applies feminist criticism to the medium of games, as critics of everything from movies to literature to popular music have long done. Gamers, despite their insistence that the medium be treated as a legitimate art form, have since acted as though Sarkeesian intends to single-handedly throw every one of their Xboxes into a wood chipper (you know, since feminist criticism carries so much weight in the world). And the more prominent Sarkeesian has become — thanks in part to reporting on the harassment she received — the more intent her detractors are on driving her away like the witch they believe her to be. And the fury has moved beyond Sarkeesian to those who dare to support her: When one male game developer recommended the videos on Twitter, he was promptly advised to kill himself; fanboy fave Joss Whedon called Tropes vs. Women “truth-telling” and found his Twitter mentions brimming with equal amounts of insults and conspiracy theories.

You might think that Sarkeesian truthers would have felt some measure of moral satisfaction when the critic took to Twitter last Wednesday night to report that she had contacted local authorities and was leaving her home to stay with friends. But you’d be wrong; an alarming number of them contend that Sarkeesian was faking her own harassment for sympathy and victim points. The idea that someone whose presence on any Internet platform is regularly greeted by a string of unhinged epithets would fake her own harassment would be laughable if it wasn’t a point of devout belief.

And then this past Friday, musician and "Voice" judge Cee Lo Green pleaded no contest to one felony count of “furnishing Ecstasy” to a woman during a dinner party in July 2012 when he allegedly drugged her drink without her knowledge, and she woke up in his bed the following morning with no memory of how she got there. Green contends that he and the woman had consensual sex, but when tweeting in his own defense on Sunday evening, he proved that his grasp of what constitutes consent is a wee bit shaky.

“If someone is passed out they’re not even WITH you consciously,” he protested, adding, “So WITH implies consent.” While a good chunk of Twitter shook its collective head at this line of reasoning, Green went on to compare raping a woman to robbing a house, tweeting that “When someone brakes on a home [sic] there is broken glass where is your proof that anyone was raped.”

Green’s tweets disappeared hours later, likely on the advice of his beleaguered counsel, and so did the musician’s formerly cuddly, Barry-White-in-a-higher-register image, replaced with that of just another famous person who doesn’t get that women’s bodies belong, first and foremost, to them. And yet, it’s unclear whether the incident itself and the singer’s mind-bendingly self-serving tweets will ultimately repel his fan base or imperil his work. The same narrative that’s been applied to everyone from Dylan Farrow to the college women who report being raped by star football players might well dog the as-yet-unidentified woman at the center of the case: She knew what she was getting into! She probably just wants attention/money/a reality show! Cee Lo’s so famous and rich, he doesn’t need to rape anyone! And as time goes on, the woman will see her ordeal reduced, in the tabloid parlance of sexual assaults involving the famous, to a “scandal” rather than a crime.

And, speaking of crimes disguised as scandals ... there was, of course, the hacked photo dump on Sunday night. News that the iCloud storage of more than 60 female celebrities had been breached, and nude photos leaked, skittered gleefully over social media in what the leak’s Reddit-based perpetrators charmingly dubbed “The Fappening.”

This isn’t the first time such a leak has happened, of course. But it’s the biggest once since the advent of social media like Twitter, which adds a more sinister dimension of violation to the event — not only are strangers accessing and looking at the leaked photos, they’re also tweeting directly at the women involved to let them know how much they enjoyed them.

Actress Mary Elizabeth Winstead, one of the women whose photos were leaked, had long ago deleted them from her phone. “Knowing those photos were deleted long ago, I can only imagine the creepy effort that went into this,” she tweeted on Sunday night.

As you might imagine, replies to Winstead were almost as gross as the incident itself. There were people shaming Winstead for taking the photos in the first place, people letting her know they found her insufficiently fapworthy, and, of course, people criticizing her for having the gall to speak out against the crime. (“Most people in the public eye ignore things they don't want ppl to be interested in. Almost like you're enjoying the attention,” said one notable asshole.) Evident in the tweets were frankly terrifying attitudes about entitlement to women’s bodies. One user wrote, “You deserved this because a girl like you would never date me in real life, no matter how nice and courteous I was. Karma!” In a second tweet, he added, “Sorry but it’s not fair that only the guys of your choosing get to see the photos while the ugly, less fortunate guys do not.”

As Neetzan Zimmerman pointed out, there are echoes of the likes of Elliot Rodger in such tweets, a righteous fury that women have the gall to fancy themselves autonomous beings with the right to reserve their nakedness for chosen partners. It’s the same righteous fury that surfaces in violent threats when women dare to encroach on the valued, and historically largely male territory of video gaming, so it’s no accident that at least one of the men shaming Winstead is also a vocal opponent of Sarkeesian.

This isn’t just about the hypocrisy of a bunch of dudes who rail against NSA snooping but pat themselves on the back after launching campaigns of privacy violation and intimidation against women. It’s also about the intersection of a sociopolitical culture that still hasn’t figured out whether women can be trusted — trusted with their bodies and sexualities, trusted to have opinions on culturally male mainstays like video games — and an Internet culture that, simply put, values the sanctity of anonymity over the safety of users.

The slight silver lining in this weeklong shit storm — though, really, it’s more of a chronic weather pattern — is that many outlets have stepped up to report on Sarkeesian and Green and the photo leak with a frame that plainly condemns these abuses and pleads with others to not perpetuate them. Reporting on Cee Lo’s rape apologism isn’t confined to the music press or feminist blogs; after a storm of tweets and a campaign by the direct-action group Ultra Violet, Cee Lo’s upcoming TBS reality show, "The Good Life," was canceled. Likewise, the photo leak has been the subject of several smart, stern reminders that photos of naked celebrity hotties aren’t an erotic windfall but a very real crime with clear consequences. (Ask Christopher Cheney, sentenced in 2012 for hacking into several celebrity accounts to leak nude photos, if the high-fives he got from his online bros were worth 10 years in jail.)

And at least one gaming hub, Australia’s GamesOn.net, has taken the past week’s events as an opportunity to restate its code of conduct. In an open letter to his community, editor in chief Tim Colwill wrote, in part,

I hope you’ll be part of a glorious future where a game that treats women and LGBT groups with respect won’t be held up as some weird oddity to praise and encourage. A future where female gamers don’t have to disguise their voice on raid chat, where game developers won’t be threatened with rape. Where people won’t be asking for a “gay filter” on their games because homosexuality makes them uncomfortable. I hope you’ll stick around for that.

Colwill’s statement, and its last sentence in particular, captures something salient about online misogyny in its many forms. The more nominal equality women get, the more we are gleefully reminded not to get too comfortable, and nowhere has this been more true than on the Internet. Even the mighty Beyoncé may not be able to change that. But lately, if incrementally, tolerance for such behavior seems to be shrinking, and its perpetuators are increasingly recognized as the backward-thinking, tantrum-throwing children they are. As Colwill points out, the most radical outcome of making GamesOn.net a bigotry-free zone is equality. It’d be nice to think that, as a culture that generally fancies itself progressive, we can handle that. After all, what’s so terrifying about a world where critical thinking about video games produces a bigger market for video games, and thus a greater variety of good games? What’s so threatening about treating women, celebrities and otherwise, as though they exist for purposes other than your sexual gratification?

This won’t be the last horrible week, or the last photo hack. It almost certainly won’t be the last celebrity badly misunderstanding the difference between silence and consent. And as long as Anita Sarkeesian continues making videos, her naysayers will resort to threats and epithets because they don’t have any real ammunation against her generally commensense arguments. But if each incident also brings a fresh wave of outraged déjà vu — wait, we’re still dealing with this BS? — there may be real change on the horizon.