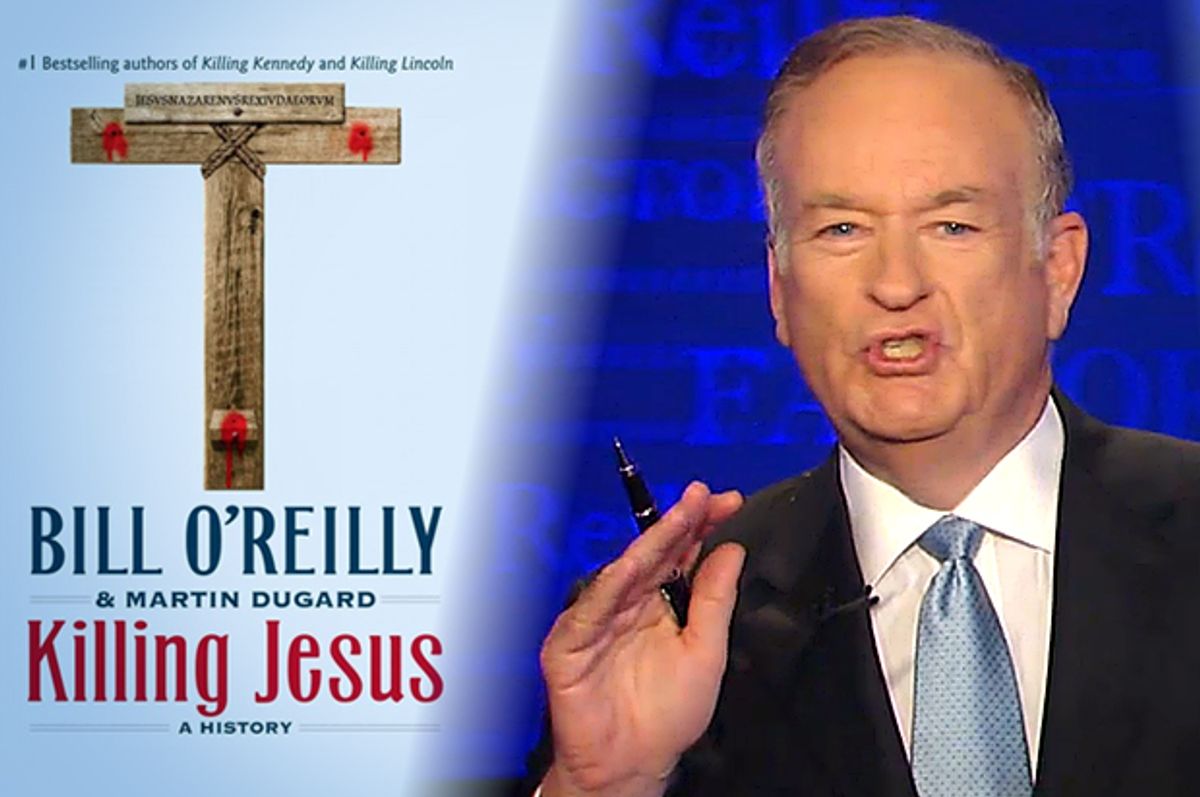 From "Killing History: Jesus in the No-Spin Zone"

Bill O’Reilly is a phenomenon. He is the host of the top-rated "The O’Reilly Factor" and the co-author of a number of bestselling historical books, notably "Killing Lincoln" and "Killing Kennedy." To these he has recently added "Killing Jesus: A History," written with Martin Dugard. I must confess to being a frequent viewer of "The Factor." I enjoy Bill O’Reilly’s humor, and I usually agree with his social and political opinions (though on some issues he is not quite conservative enough to suit me). I want you to be aware of this at the outset, because I want it to be clear I am not one of the man’s detractors who look for any opportunity to take him down. This book, a rejoinder to "Killing Jesus," I felt compelled to write by my professional conscience as a New Testament scholar. It is evident to me that Bill O’Reilly and Martin Dugard are writing way, way out of their fields of expertise and that they simply do not understand either the principles of critical historiography or the difference between a historical and a religious treatment of a topic.

"Killing Jesus" attempts to apply the same principles of journalistic research that worked well enough in O’Reilly and Dugard’s books on the Lincoln and Kennedy assassinations. But it does not work. I hope to show (as much as I regret having to) that the task of reconstructing the events connected with a figure like Jesus Christ, the deity of the Christian faith, and that of writing about modern political figures, is as different as the heavens are from the earth. And "Killing Jesus" depends essentially upon ignoring that difference. I should estimate that reporting the historical truth about Jesus falls somewhere between documenting the facts about Robin Hood and Superman. It is just not the same thing at all. Another thing I aim to demonstrate is that to treat Jesus as one treats Abe Lincoln tends to make nonsense of the gospels, our main source concerning Jesus. If one loves the gospel accounts and wants to appreciate them by the standards by which they were written, one does not come out where O’Reilly and Dugard do. One does not even begin where they begin. If there is any parallel at all between writing about JFK and writing about Jesus, we might have to compare using the gospels for a blow-by-blow account to drawing up "Killing Kennedy" from the mass of conspiracy theories entertained by Dale Gribble. In both cases we are dealing with a genre very different from straight history.

Any biographer of Kennedy or of Lincoln must familiarize himself with the earliest available source material (though the gospels are not nearly so early or reliable as our authors believe) and then do a comprehensive study of previous work in the field. One would, for instance, weigh and compare the very different portraits of Honest Abe drawn by Carl Sandburg and C. A. Tripp, who claimed to have “outed” Lincoln as a homosexual. It is important not to disregard the history of scholarship lest one, impatient to reinvent the wheel, wind up producing a wheel greatly inferior to those already available. There is no sign whatsoever that the authors of "Killing Jesus" have even begun to do their homework here. In the end notes, true, we find a number of book recommendations, but it is revealing that virtually every one of the New Testament and Jesus books mentioned are the work of evangelical/fundamentalist spin doctors dedicated to defending the proposition that the gospels are entirely accurate, miracles and all. We are not in the No-Spin Zone anymore. And it is not that O’Reilly and Dugard actually discuss the arguments of these authors. It seems, rather, that O’Reilly and his collaborator have simply cited these apologists for the faith as a license to treat the gospels as inerrant scripture.

O’Reilly has many times contended that "Killing Jesus" sticks to the facts and stops short of promoting religious doctrine. Please tell me how a purely historical work time and again asserts as simple fact that Jesus fulfilled Old Testament predictions. It is not enough to refrain from calling Jesus “Christ.” That does not make the book impartial history. The entire treatment of the Bible bears witness that O’Reilly and Dugard are approaching it as committed religious believers. Both are proud Roman Catholics. So was the late, great New Testament scholar Raymond E. Brown (whose magisterial work "The Death of the Messiah," thankfully, our authors recommend in the end notes), but Father Brown knew the difference between historical research and proof-texting, between writing a scholarly work and writing a narrative novel with a few pedantic digressions thrown in. Raymond E. Brown, Joseph A. Fitzmyer, John Meier, Hans Küng, Edward Schillebeeckx, Thomas L. Brodie, Herman Hendrickx, Jon Sobrino, all are Roman Catholics — and not one of them would ever be caught with his name on a book like this one.

"Killing Jesus" has nothing to do with Life of Jesus studies. It is in fact almost a twin to Mel Gibson’s oh-so-authentic 2004 film "The Passion of the Christ." Both are exhibitions of popular piety aimed at reinforcing believers’ faith and stilling their doubts by providing a real-seeming illusion about the myths and legends of the gospels. Their function is not dissimilar to that of the numerous End Times movies and novels like "Left Behind," "Image of the Beast" and "A Distant Thunder." Those fictions, whether on-screen or page (and "Killing Jesus" is already heading for the screen), help buttress faith in the ever-receding, always deferred Second Coming of Christ by depicting it in narrative form before the eyes of those who would really like to see the Rapture, the Great Tribulation and so on occurring on the evening news. They don’t. They can’t. So End Times fiction is the next best thing, a game of pretend. And that is just the role of "The Passion of the Christ" and "Killing Jesus." The familiar Sunday school tales are dressed up in pseudo-documentary form to make the Christian reader feel confident that the legends are historical reports, not legends at all. It is all a trick, though Gibson, O’Reilly and Dugard are presumably tricking themselves as well.

It is not going too far to compare "Killing Jesus" to Dan Brown’s pseudo-historical bestseller "The Da Vinci Code." Like Brown, O’Reilly and Dugard assure the reader that the fast-paced narrative he is about to read is based on historical fact. And just as Brown’s “facts” have been gathered from half-cocked “research” like Baigent, Lincoln and Leigh’s cinderblock of misinformation, Holy Blood, Holy Grail, O’Reilly and Dugard are too ready to accept the religious apologetics of Craig Evans, Darrell Bock, J. P. Moreland and William Lane Craig as genuine historical scholarship. The reader of either book is sure to be led astray, though admittedly in very different directions.

O’Reilly and Dugard are like Ben Bernanke, churning out inflated currency that lacks the value of the amount stamped on it. They are like Jay Carney, bald-facedly handing out the inflexible talking points of an institutional party line, in this case that of conservative Christianity. Bill O’Reilly has no trouble at all seeing what is really going on in these political cases, but when it comes to religion he cannot see it. If he even knows about the great legion of critical scholars who classify most of the gospel story as myth and legend, no doubt he considers them pinheads. If political liberalism is, as David Mamet contends, essentially a fact-proof, dogmatic religious faith, it is a shame that Bill O’Reilly can see through those illusions but cannot penetrate those of Christian apologetics. Instead, in "Killing Jesus," he joins in propagating them.

Whenever evolutionary biologist and militant atheist Richard Dawkins appears on "The Factor" (and it is greatly to Bill’s credit that he does), I’m sure many of my readers find themselves cringing at the lame arguments Bill uses in his attempts to set Dawkins straight. Like me, they must wince at the smug self-satisfaction of Bill’s boasts after the interview that he has triumphed over Dawkins. He is just plain out of his league. And, I regret to say, in "Killing Jesus" he is even farther in over his head (as tall as he is). And the book you are about to read is an attempt to set things right, to undo the misinformation that constitutes "Killing Jesus." In other words, the spin stops here.

From "Killing History: Jesus in the No-Spin Zone" (Prometheus Books, 2014). Reprinted by permission of the publisher.