The former Republican governor of Virginia and his wife were found guilty of corruption, fraud and bribery 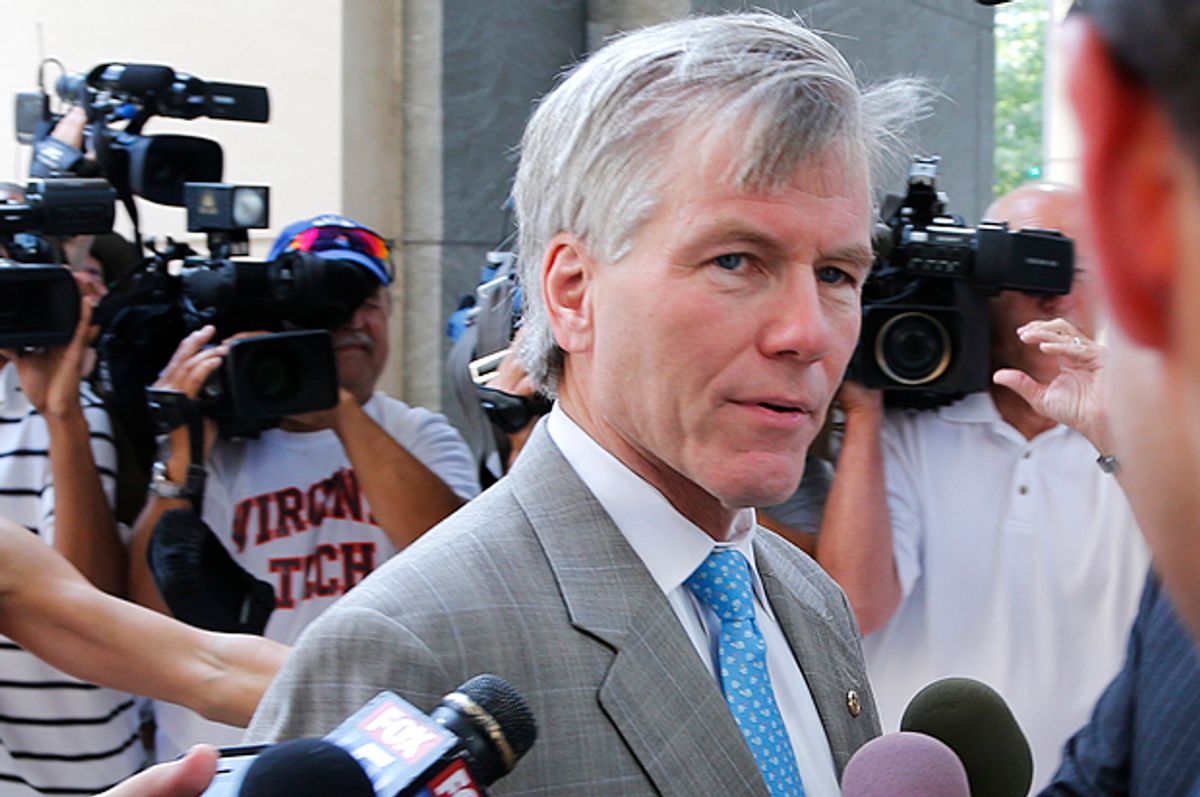 RICHMOND, Va. (AP) — A jury has convicted former Virginia Gov. Bob McDonnell and his wife, Maureen of corruption, fraud and bribery, after the couple accepted more than $165,000 of gifts and loans from a businessman.

Both Bob and Maureen bowed heads and wept as a chorus of "guiltys" kept coming from court clerk.

McDonnell was widely considered a possible running mate for presidential candidate Mitt Romney in 2012. He was charged with doing favors for a wealthy vitamin executive in exchange for the gifts and loans.

Both were found guilty on most counts against them.

A federal jury in Richmond returned the verdicts Thursday after a five-week trial and deliberating for three days.

Regardless of the outcome of former Virginia Gov. Bob McDonnell's corruption trial, a string of personal details that emerged during five weeks of testimony shattered an image he cultivated over more than two decades in public office as a happily married family man and fiscal conservative.

Jurors reached a verdict on Thursday, their third day of deliberations, and were expected to announce it in the afternoon. They faced an enormous volume of evidence and a portrait of a man whose personal life unfolded in stark contrast to his public persona: McDonnell espoused family values and spending restraint while his marriage crumbled, his children had to schedule appointments to see him, and he relied heavily on credit cards and loans.

McDonnell and his wife, Maureen, are charged in a 14-count indictment with doing special favors for Jonnie Williams, the CEO of dietary supplements maker Star Scientific Inc., in exchange for more than $165,000 in gifts and loans. The defense sought to convince the jury that the couple could not have conspired because they were barely speaking

As a state lawmaker, McDonnell unsuccessfully championed legislation to allow couples to enter into a "covenant marriage" in which they would agree to seek marital counseling before getting a divorce. But he was unable to convince his wife to undergo marriage counseling after their relationship deteriorated to the point where they could not communicate, McDonnell testified, although she did eventually get individual treatment. He and his wife are living apart during the trial, McDonnell revealed.

McDonnell, once a national Republican up-and-comer, testified in detail about his broken marriage. His attorneys introduced an email he wrote to his wife in 2011 complaining about her "fiery anger" and pleading with her to work with him to save the marriage.

It was a much different picture than the public was accustomed to seeing — the couple often holding hands or exchanging pecks on the cheek. Prosecutors introduced photos documenting those apparently tender moments, but the McDonnells' eldest daughter testified it was all a facade concealing a chilly relationship.

"Certainly this case cast an extraordinarily different light on their marriage," said Robert D. Holsworth, a consultant and retired Virginia Commonwealth University political analyst who sat through most of the trial. "They were the most openly affectionate first couple I've seen in the last 30 years, and now the trial tells us it was all an act."

Evidence also showed that the McDonnells' credit card debt at one point exceeded $90,000 — a hefty amount for a man who earned $175,000 a year as governor. Maureen McDonnell, a former Washington Redskins cheerleader, sold vitamins and skin care products from her home while raising five children but scaled that back after becoming first lady.

An expert defense witness testified that the McDonnells' finances were sound, but even U.S. District Judge James S. Spencer scoffed at the accountant's conclusion that unused credit card capacity amounted to "liquid resources" the couple could tap. The McDonnells also relied heavily on what prosecutors called "other people's money," including $120,000 in low-interest loans from Williams. The first $50,000 went to Maureen McDonnell, who used it to pay two credit card bills and buy Star Scientific stock. The rest went to MoBo Real Estate Partners, the money-losing Virginia Beach vacation rental properties owned by Bob McDonnell and his sister.

"He ran the state in a fiscally prudential manner while his own finances were run in a way that no one would recommend to their children," Holsworth said.

Prosecutors brought that contradiction to the jury's attention by showing an excerpt from a television interview in which McDonnell crowed about balancing the state budget, declaring that government has to handle its checkbook in the same responsible manner as families.

Many defense witnesses also testified that McDonnell is not materialistic. He carried his working papers in an old milk crate, and former communications chief Tucker Martin said staffers often teased their boss about holes in his shoes.

In closing arguments, a prosecutor said the evidence — including a Rolex watch, expensive golf outings and trips featuring $5,000 bottles of cognac and Ferrari rides, all on Willliams' tab — shows that even a man who walks around with holes in his shoes can enjoy the finer things in life.