WND's Selena Owens argues that, unbeknownst to them, Americans are being tricked into joining a devilish cult 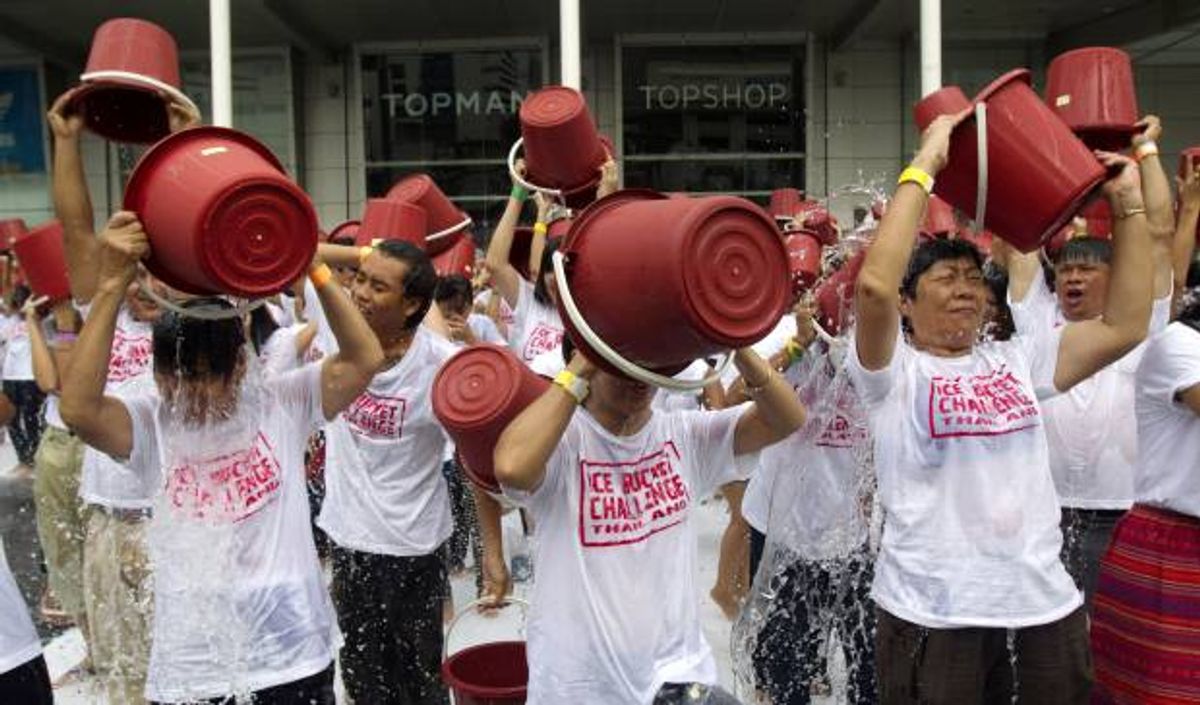 At this point, the Ice Bucket Challenge (IBC) has been a cultural phenomenon long enough that the emergence of a backlash to it is hardly unexpected. But while the folks who came up with the ALS Association's viral fundraising campaign no doubt predicted some criticism —  the fact that the ice bucket is supposed to come into play only if there isn't a donation is not great, for example — we'd hazard to guess that being described as tools of Satan is not something they game-planned for in advance.

Yet that's exactly the argument being made by Selena Owens, a columnist for the extremely right-wing WND.com, in her latest piece. "The ALS IBC is ritualistic in nature," Owens writes, describing the trend as if she were an ethnographer studying small tribes in a newly discovered land. And after perusing the list of celebrities who've embraced the IBC — including the apparently pagan Lady Gaga and the dreaded Oprah Winfrey — Owens is forced to conclude that it's more than just any old ritual.

In her piece, Owens implies that she did not initially oppose the IBC — though she admits that it "didn't feel right to [her]" from the beginning. But when she heard Oprah try to replace Christianity and Jesus with the ALS, Owens writes, it turned her into a crusading opponent of the fundraising trend. After Oprah jokingly said she was taking on the challenge "in the name of ALS and the Ice Bucket Challenge" (and not in the name of Jesus), Owens writes, she realized the awful truth: "Oprah mistakenly believes the One True God is jealous of her ... and basically considers herself to be a god, I found this statement to be very cultic in nature."

But Oprah is not the only one behind the cult, Owens writes, even if she is its ultimate architect. More troublingly, Owens argues, the influence of satanic cultism now reaches to the very top of the American pop culture pyramid:

Whenever spectators watch singers like Beyonce, JayZ [sic], Rihanna, Lady Gaga and especially Nicki Minaj, they are indoctrinated and involved with blatantly satanic rituals that stem from the deep abyss of the occult. Some of these very same artists have taken the ALS IBC. Gaga doesn’t utter a word as she baptizes herself, arrayed in a sexy black leotard, sporting black lips, perched in an ornate black chair. Gaga doesn’t use a bucket; she instead uses a large silver bowl associated with pagan worship. Do you think she would take the IBC if it didn’t meet her pagan criteria? Not a chance.

Still, as far as Owens sees it, this remains Oprah's show. "Oprah is a god to millions of Americans, and those who follow her doctrine and antics have tossed Jesus off the throne of their hearts – perhaps not intentionally … or perhaps so," Owens concludes. "Yet by following her seemingly innocent IBC decree, knowingly or not, they have cast Jesus off symbolically."

May Oprah have mercy on their souls.