At Koch confab, UNCF head boasts about how he quietly sold a “Koch scholars” project to the black community 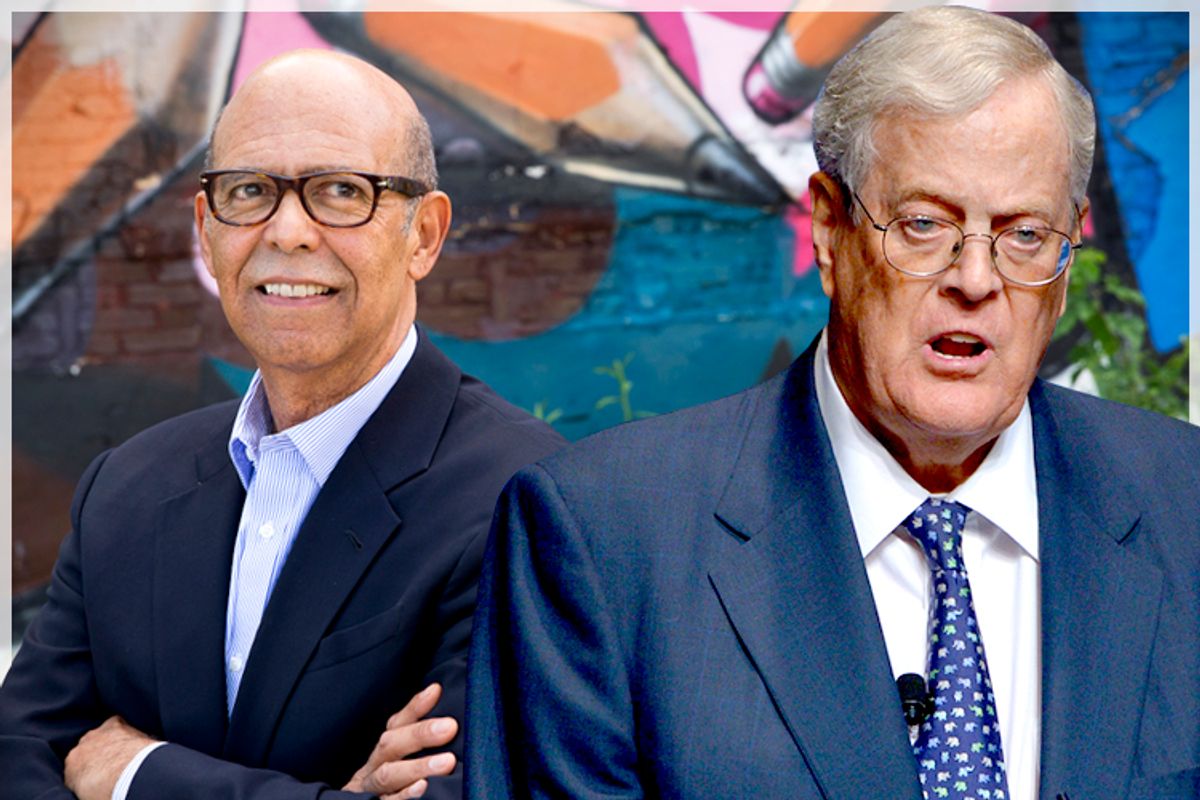 At the Koch brothers’ lavish June retreat, the head of the United Negro College Fund is caught on newly released audio mocking critics of his controversial $25 million “Koch scholars” partnership for depicting it as “mind control,” and explaining how he fought back by winning over African-American radio host Tom Joyner.

But first, he had to explain to the overwhelmingly white group of plutocrats who Tom Joyner was.

Michael Lomax’s remarks at the Koch network event are unlikely to win over other critics of his decision to take the multimillion-dollar gift, and the strings the Kochs attached to it. The public sector employees union AFSCME ended its own partnership with UNCF, not over the Kochs’ gift itself, but over Lomax’s decision to attend the annual political strategy summit.  New audio and transcripts of his panel discussion, obtained by the Undercurrent and provided exclusively to Salon, probably won’t make AFSCME reconsider its decision. Lomax's office did not return calls for comment.

Lomax was one of two outside speakers on a panel that was introduced as designed “to educate” network members about how to explain “the dangers of big government as well as the advantages of a free society.” He shared the stage with National Association of Criminal Defense Attorneys director Norman Reimer, whose work on over-criminalization has received Koch funding. The panel was billed as helping the Kochs and their allies “drive the national conversation” – in this case, by partnering with “unlikely allies” to help the unfortunate.

It was kicked off by Koch strategist Richard Fink, fresh from a surreal session where he demonized the  “collectivist” approach of President Obama and the Democrats as leading to depression, addiction and the Third Reich, and claimed that raising the minimum wage could lead to fascism. Fink bragged that working with the UNCF was part of the Kochs’ new focus on “reaching people that are working hard to add value to people’s lives. That’s exactly what we do …That’s what this group does. This group creates value, OK. The other side creates divisiveness, but we solve problems.”

Lomax followed Fink’s attacks on Democrats by lamenting “polarization.” He praised other Republicans and industrialists who, like the Kochs, have supported UNCF over the years, from Prescott Bush to John D. Rockefeller and Eli Lilly. The UNCF president humbly described his group as “not big idea people. We’re not ideological. We’re just trying to move a needle.”

Well, look, polarization is something we experience every day (inaudible) just demonstrated again that the nation is deeply divided, and it's not just that people disagree.  We demonize the people that we don't agree with.  And we think that they’re not just wrong-headed, they're bad.  And so, that's a terrible environment to try to get anything done, and it's an almost impossible environment in which to affirm something (inaudible), as opposed to (inaudible).

So at the UNCF, we're, we’re not big idea people.  We're not ideological.  We're just trying to move a needle.  And the needle that we've been trying to move for 70 years is getting African-American kids to and through college.  We started doing that at the end of World War II in 1944.  We couldn't do it by ourselves.  And we worked with business leadership in this country, John D. Rockefeller (Inaudible) our first campaign with $750,000 in 1944.  And over the 70 intervening years, we've raised $4 billion (inaudible).

Prescott Bush was on that first committee.  You know, Eli Lilly was alive and well.  (Inaudible) and Paul Mellon, a whole a lot of wonderful people wrote checks, but they did it in order to help people help themselves.  And today all we want to do is we want to give more college-ready high school graduates a chance to earn a college degree and live their life.  And so, I'm here working with, in this partnership, because this is what we've been doing for 70 years, and we've got to do a whole lot more.

More than once Lomax joked affectionately with “Charles” Koch about their partnership. He mocked critics who were uncomfortable with the UNCF producing “Koch scholars” as somehow promoting “mind control,” and defended its focus on free market economics. Nobody can say the Kochs and their friends "don’t know anything about running a business,” he said, and the program might help students get jobs at “great companies like Koch Industries:”

One of the criticisms we got from this was – mind control.

They have not met the kids – I can’t control my own kids.

What I will tell you is that students want the opportunity to pursue their academics without worrying about how they're going to pay.  And this is going to give good students the chance to focus what they need to focus on (inaudible). We’re going to focus on two areas that they're going to work on across institutions and in the network, and that is entrepreneurship and innovation.  And the only thing I will tell you that African-American kids want more than a college degree is a successful career, and many of them want to work for great companies like Koch Industries and a whole lot of them want to start there.  And so, I think that the one thing that we're not hearing is that these folks don't know anything about running a business.  And so, we're expecting that our students are going to [get] a chance to learn from their successes.

Norman Reimer likewise thanked the Kochs for their “investment” in his work, and described working across ideological lines on issues of over-criminalization, including co-authoring a report with former Attorney General (and Koch-funded architect of the government shutdown) Edwin Meese. To be fair, the bipartisan work on criminal justice issues that Reimer described is genuinely robust and potentially important.

But it was the UNCF partnership that Koch Industries communications director Steve Lombardo singled out in his remarks about success stories. Lombardo explained that he and Lomax “stuck to our message,” which he said resulted in a respectful, widely republished AP story and a mostly positive social media response:

In that case it was very easy to promote our conversation because we stuck to a positive message.  And, you know, a lot of times Michael handled a lot of very difficult questions along the way, but we have a message discipline, and I think that was clear.

And, look, ultimately, the, uh, proof is in the pudding.  We ended up with this AP story that Michael did an interview with.  It was a terrific story, it was picked up by 30 media outlets across the country.  And over a week's period we had a little over 15,000 social media messages.  Most of them were on Twitter.  And of those, 87 percent were positive.  So kudos to Michael and the team, they did a great job.

Asked about big lessons from the partnership with the Kochs, Lomax shared his experience on "The Tom Joyner Morning Show."

Well, I would say, first of all, that we survived this week, the announcement of this partnership.  I wasn't sure –

....When I went on the Tom Joyner Morning Show -- I know you all probably don’t (know who) Tom Joyner (is) (inaudible).  And he is noted for black radio in the morning drive time, and gave me a hard time about it.  And finally Tom Joyner said, “You know, do good.  Do good.”  And he said, “You know, I'm fine with it.”

In closing remarks, Lomax shared more lessons of his experience defending what he called his “courageous” partnership with the Kochs:

I think we have three things that we've got to do:  we can’t do something (inaudible) and assume the attacks won’t continue, so I think we’ve got to remain vigilant and tell our story of this partnership consistently and accurately.

And number two, UNCF has got to keep reminding all Americans of our mission.  For 40 years we've been telling folks, "A Mind is a Terrible Thing to Waste."  It still is -- we’ve added something to that -- "A Mind is a Terrible Thing to Waste, But a Wonderful Thing to Invest In,” and we need more investment.  And I think it's real important that over the next 12 to 24 months that we demonstrate to America that this courageous partnership between Koch Industries, and Charles Koch Foundation, and UNCF has been good for America and that it’s wound up (inaudible) of investing in our kids and building a better future for them (inaudible).

Lomax’s remarks aren’t likely to convince critics of the UNCF-Koch partnership. As more audio and transcripts from the retreat are released, it’s clear that the Kochs’ gift is being promoted as a way to sell their far-right agenda to the “middle third” of the country that hasn’t made a firm choice between the Koch freedom agenda and the Democrats’ plan to spread addiction, depression and fascism. It’s also hard to square Lomax’s insistence that the Kochs are friends to African-Americans with the brothers’ well-known funding of voter suppression and union-busting efforts.

“The Koch brothers want a government-free society,” AFSCME president Lee Saunders, who is African-American, told me in July. “Public service has enabled African-Americans to move into the middle class, but the Kochs are trying to dismantle that.” Decimating the public sector while contributing $25 million to create “Koch scholars” doesn't seem like a fair trade.