Joan Rivers' defiant star power: What she reveals about the cultural obsession with youth

Rivers refused to apologize for her fierce, relentless attempts to stay relevant 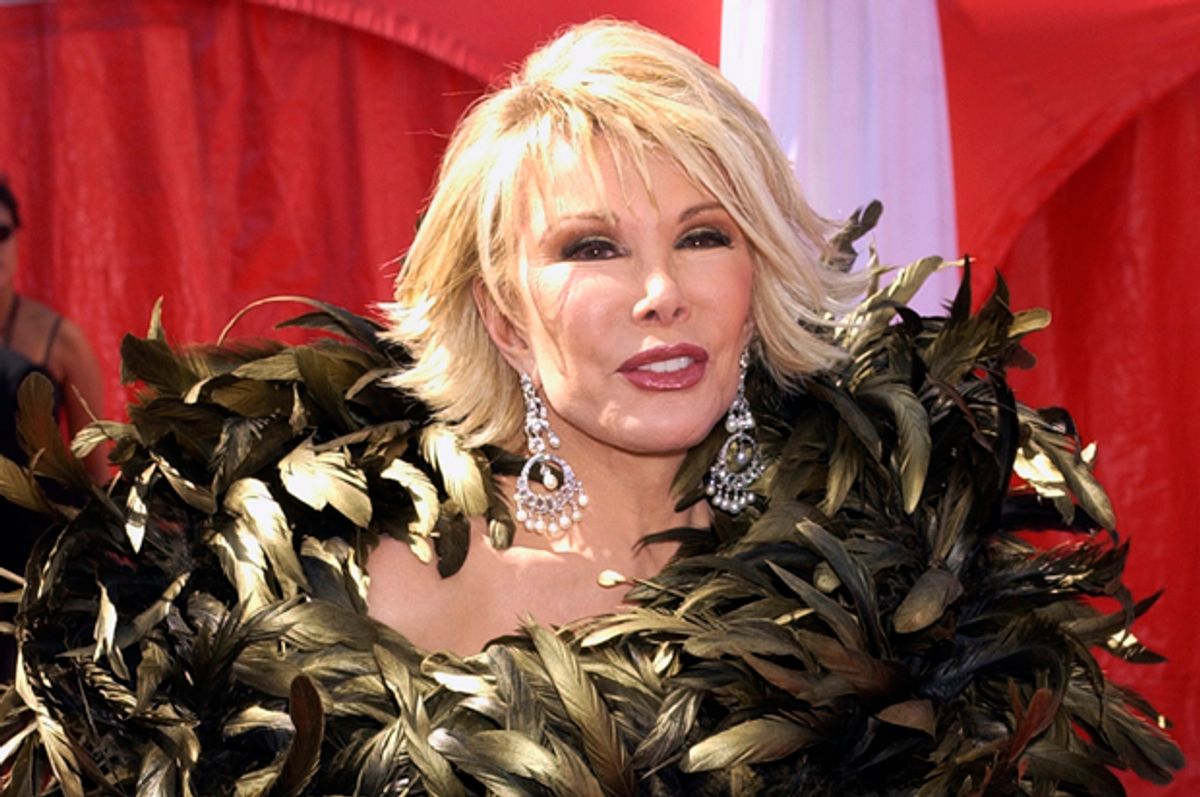 In her comedy routines, Joan Rivers was often quick to cackle over the ages of other celebrities and their vain attempts at staying young. The likes of Goldie Hawn and Joan Collins were targets of Rivers’ wrath, in which she would point out things like their sagging skin, the mystery of their date of birth, and their other rather desperate attempts to appear youthful. When people who yell out, “But you’re old, Miss Rivers, too!” the acerbic comic would always quickly retort with, “But I don’t see me!” For Joan Rivers, age may have helped her brand rather than defeated her.

With her excessive cosmetic surgeries and artificial look (blond wig, heavy makeup, gaudy designer clothing), Joan Rivers has seemed to some more like a colorful, well-appointed mannequin than an actual living celebrity. Her extreme cosmetic aesthetic has been an apt metaphor for the excesses and vanities of Hollywood. But it's exactly this – her unashamedly vain attempts at immortality, with three hit shows at 81 –  that appealed to so many of her fans.

Joan Rivers was unrepentant about her physical transformations, opinionated purely for the pleasure of being opinionated, and catty just for the fun of it. And people -- myself included -- loved her for it. Even when she engaged with Miley Cyrus and Rihanna in bitter feuds on social media, her petty insult-slinging could feel like a cold splash of water on an obsessively p.c. culture. Rivers rejected traditional gender narratives that say women are on their way out at 40. Her plastic surgery seemed less like an act of desperation than an authentic, brazen means of self-expression.

For many of us, Rivers’ star power revolves around images of her on the operating table for more Botox in her reality series, or onstage making jokes about Monica Lewinsky’s semen-stained dress (she often seemed stuck in the late 1990s), or storming off TV sets after being asked an impertinent question. Whether it was a new book, a new Web series, or just another scandalous attack on the first lady, you always knew Rivers was ready for another fight. With her insatiable appetite for controversy and tabloid attention, and her relentless media presence (QVC shopping, "Fashion Police," countless books, reality television shows), Rivers was an icon of eccentric style and energy; she was never ashamed of her fierce desire to stay relevant. In an entertainment world that endlessly fetishizes youth, Rivers offered a kind of synthetic vitality. She modeled herself as a walking satire of our cultural superficiality; in her own campy excesses, she pointed out just how ridiculous the rest of us could be.