Gaza's scary new outrage: How some Israeli leaders are pushing for war crimes

Amid the threat of more airstrikes, Palestinians (and many Israelis) have another fear: Where the rhetoric is going 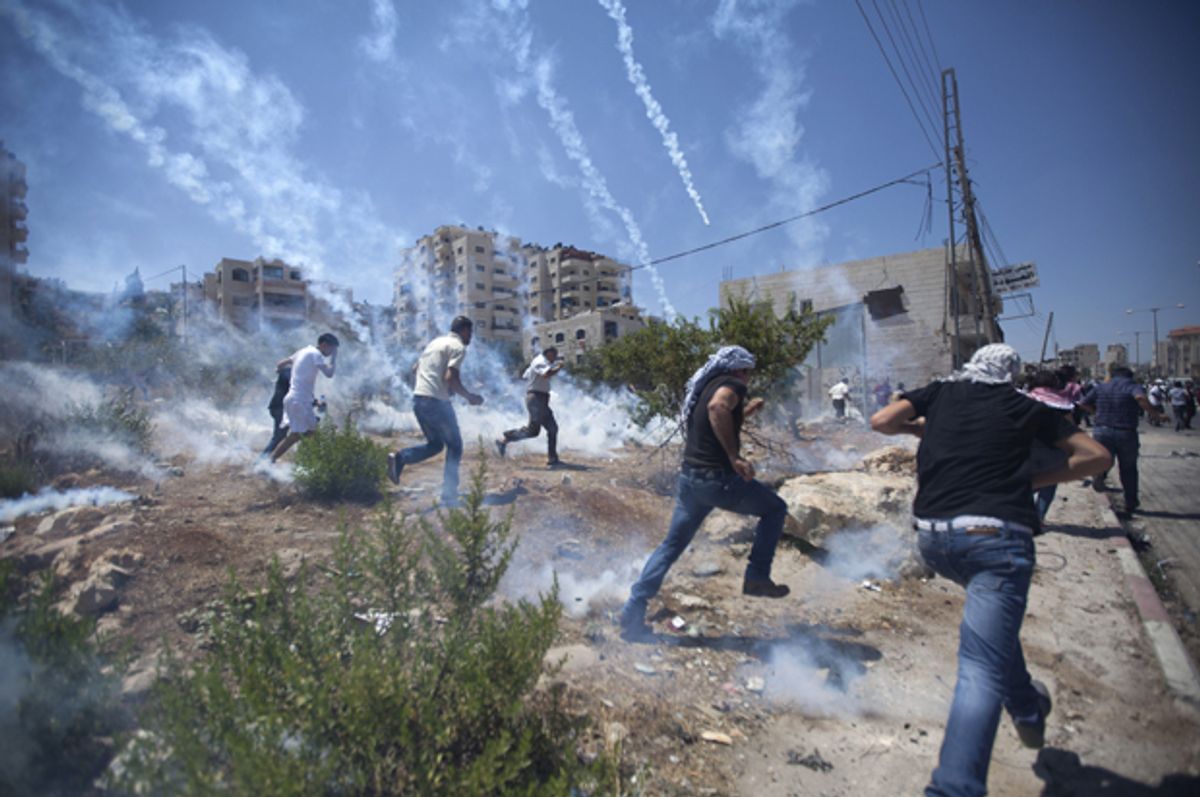 Palestinians run for cover during clashes with Israeli soldiers following a protest against the war in the Gaza Strip, outside Ofer, an Israeli military prison near the West Bank city of Ramallah, Aug. 1, 2014. (AP/Majdi Mohammed)
--

Just over a week ago, a young Long Islander called Yochanan Gordon published a blog in the Times of Israel. It argued – poorly – that the only way to deal with the “enemy” facing the Israeli people was to “obliterate them completely.” The headline – “When genocide is permissible” – left little doubt over precisely what this meant.

The outcry that followed the publication – and the Times’ swift removal and apology – showed the sentiment was far from representative of wider society. Because the paper operates an open blog policy the piece hadn’t been seen by any editors before being uploaded. Gordon was a total unknown who in his pompous bio listed a family connection to journalism as his only professional qualification. For many reasons, Yochanan’s argument looked a lot like an aberration.

Except it wasn’t. In the heightened tension following the abduction and murder of three settler teenagers in the West Bank and the Gaza war that followed, Gordon’s blog was merely the crudest note in a chorus of calls for war crimes, of the grimmest hue, against the Palestinian people.

After the bodies of missing teens Gilad, Naftali and Eyal were found, the secretary general of the world’s largest youth Zionist movement, Rabbi Noam Perel, called for a murderous revenge that would “not stop at 300 Philistine foreskins.” At the end of July, Chief Rabbi of the Kiryat Arba settlement Dov Lior used religious texts to justify the potential “destruction of Gaza,” writing that in wartime a “nation under attack” could punish its adversaries in any way, including “taking crushing deterring steps to exterminate the enemy.”

Such words demand a response. “When it comes to language that incites to hatred and violence, it’s a human rights obligation on the state to take action,” explains Michael Kearney, a law lecturer at Sussex University who researches propaganda and incitement in international law. “Direct and public incitement to genocide is, in itself, what we’d call a crime in customary international law. Basically it’s binding on all states to live up to that obligation to prevent genocide and to deal with people who do explicitly incite to genocide.”

Precisely how that obligation might manifest itself is up to the state in question: often symbolic steps to demonstrate that such incitement is not acceptable, Kearney says, might be appropriate.

There has been much outcry among Israeli, Jewish and American communities over statements like these: After widespread condemnation, indeed, Rabbi Perel retracted his statements and apologized. But few measures have been taken against the writers and commentators in question here. Worse, incitement from Israeli politicians hasn’t resulted in serious consequences. At the beginning of July, Knesset member Ayelet Shaked posted an extract from an article by Uri Elitzur on her Facebook page. It defined the “enemy” as the “entire Palestinian people,” and wrote that the “mothers of terrorists” should be destroyed, “as should the physical homes in which they raised the snakes.” Aside from the condemnation of commentators, Shaked received no official censure: a day after, three Israeli men kidnapped 16-year-old Mohamed Abu Khdeir and burned him to death.

Kearney, who has worked on the events and the rhetoric leading up to the Rwandan and Yugoslav genocides, finds Shaked’s language particularly disturbing. "I’ve never in my working life seen explicit incitement to genocide in Western democratic media," he says. "What we have there is a change of tone. The speech and the acts are being coloured by a particularly racist, vehement language, publicly, this language of snakes, of vermin, of animals. In Rwanda, it was cockroaches, similarly in Serbia we had subhuman language. Once that becomes mainstream in society, everyone’s really in trouble."

This is rhetoric, of course, that thrives in a climate of fear and war. "If you’re in a conflict the only demand of your people is surviving," David Mekelberg explains. A researcher in political communication at Yezreel Valley College, in the North of Israel, he agrees that the discourse has shifted – and that dissenting voices are increasingly difficult to find.

"I hate to say it, but this is the easy message. When you look at the situation, and it’s a very difficult situation, the message is when someone is hitting you, the message is let’s hit him back and let’s hit him much harder," he says. "That’s easy. It’s much more difficult, during war, to say, 'look we’re now facing a huge problem, but the way to solve it is, say, raising the level of civil society, or the level of policing in the Gaza Strip.' This is a really complicated message to understand, even if you’re not in a war."

The message, however, isn’t always couched in crude rhetoric. In other pieces, in both Israel and the U.S., writers have used more complex reasoning to argue that the men, women and children of Gaza can’t be counted as civilians – a narrative that seems to excuse mass death at the hands of the Israeli army. In the Wall Street Journal, Thane Rosenbaum opens his piece on “Hamas’ civilian death strategy” with the rather conspicuous disclaimer that “no-one likes to see dead children.” He then goes on to state that many Gazans “forfeit” their “right to be called civilians” because they elected Hamas, and “shelter terrorists and their weapons in their homes, right beside ottoman sofas and dirty diapers.”

Earlier this month, in Israeli news portal Ynet, Giora Eiland similarly argued that there’s “no such thing” as innocent civilians in Gaza because “they are to blame for this situation, just like Germany's residents were to blame for electing Hitler.” Eiland is a major general and a former head of Israel’s National Security.

Other arguments have stretched to clearer descriptions of war crimes. In July Martin Sherman, founder of the Israeli Centre for Strategic Studies, published an opinion piece in the Jerusalem Post that argued that “Gaza must be dismantled and the non-belligerent population relocated.” Similar arguments have appeared at the highest levels of politics: At the outset of the Gaza bombing, deputy speaker of the Knesset and a member of the ruling Likud party Moshe Feiglin published an Op-Ed in Arutz Sheva, arguing for the ethnic cleansing of Gaza.

It set out a step-by step plan to “eliminate terror,” making Gaza a “part of sovereign Israel” that will be “populated by Jews.” The proposed process begins with an ultimatum: “one warning from the Prime Minister of Israel to the enemy population, in which he announces that Israel is about to attack military targets in their area and urges those who are not involved and do not wish to be harmed to leave immediately. Sinai is not far from Gaza and they can leave,” Feiglin writes. “This will be the limit of Israel’s humanitarian efforts.”

Article 49 of the Geneva Convention states that “Individual or mass forcible transfers” are prohibited “regardless of their motive.”

In many of these pieces, the justification driving the rhetoric is fear – stoked, of course, by rockets from Gaza and the Hamas charter. “When we look around us, we see the Islamic state, these rebels and so on, it’s frightening,” Meckelberg says. “There is also a lack of knowledge. The main argument is ‘we left the Gaza strip, why are they shooting at us?’ People don’t know the facts.” Realities like the Gaza blockade and the multifaceted complexity of Palestinian politics and life are increasingly ignored in favor, he argues, of a view that “looks at the world in black and white. You are either with us, or you’re against us.”

And in spite of the fears and objections of many Israelis, the toxic atmosphere is being felt in daily life across Israel and Palestine. Reports of racist mobs targeting Arabs and left-wing Israelis are growing in their frequency and seriousness. When an Arab man and a Jewish woman recently married, hundreds of right-wingers turned up to protest the union. And after Israeli human rights organization B’Tselem created a radio ad that listed the names of the children killed in Gaza, the Israeli Broadcasting Authority refused to air it. So despite another supposed cease-fire over Gaza, many Palestinians are deeply anxious about where the rhetoric is headed.