GOP's Kansas nightmare: How a red state is on verge of unthinkable upsets

Gov. Sam Brownback's and Sen. Pat Roberts' unpopularity could yield huge Dem wins -- in the most unlikely of states 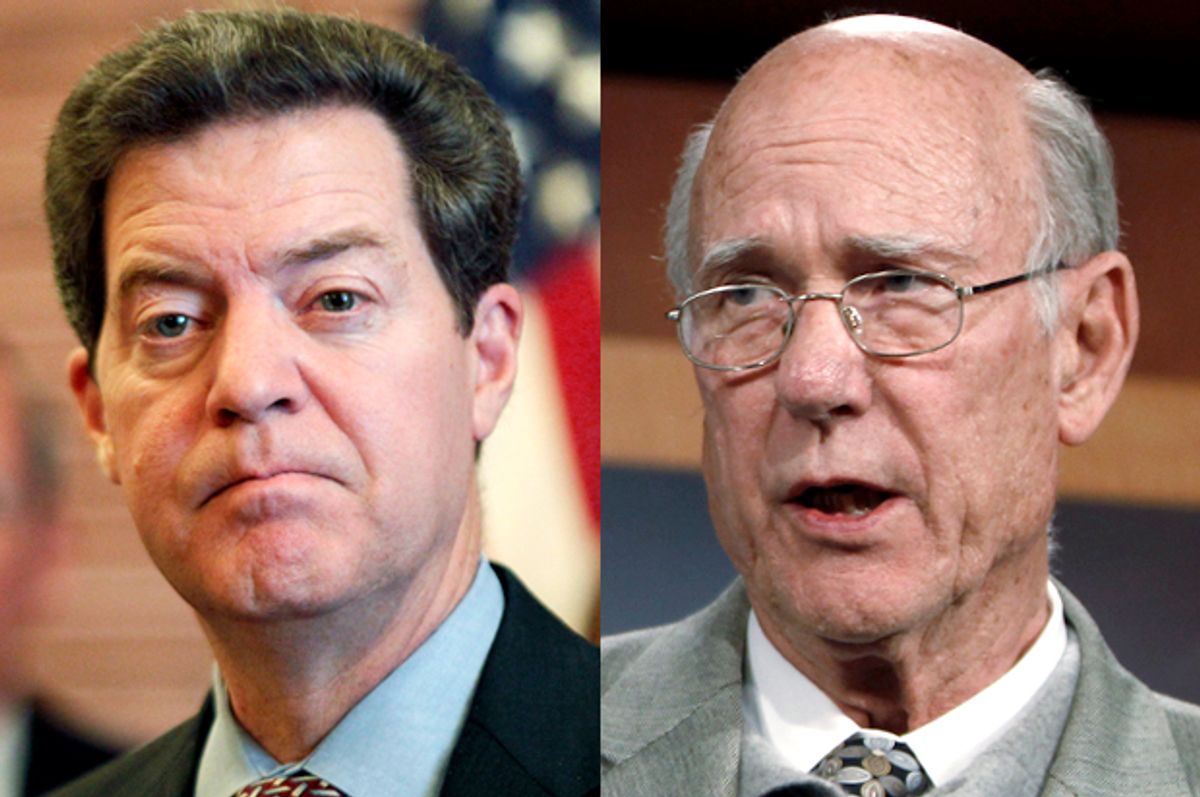 Just as the various Senate prediction models were solidifying around Republicans taking control of the chamber this November, a Democratic pickup opportunity in ... Kansas? ... has become a possibility? A real possibility, at that -- none of this "well umm we could pick up a seat in Mississippi?" buck-raising pablum that the Democratic Party will throw around every now and then.

The Democratic candidate, Chad Taylor, who was supposed to take on Sen. Pat Roberts this fall, withdrew from the race yesterday at the last minute. The (few) polls of this race had been showing Taylor, surprisingly, within a single-digit margin of Roberts. And independent candidate Greg Orman, according to a PPP poll, was already putting forward a formidable showing as well. Now that Taylor is out, the better-funded Orman is in a strong position to scoop up the state's Democratic voters, pick off moderate Republicans who've been turned off by the Tea Party and Gov. Sam Brownback's destruction of the state, and maybe even win.

Polling analysts, who usually sneer at the possibility of "game-changers" disrupting the fundamental trends of a race, are now all worked up about the game-changing possibilities on display here. Nate Silver declares that the Kansas Senate race "just got crazy," adding that his "totally wild guess" early on is that the contest is now a "toss up." (Studious Nate, as always, would like to think about this for a little while.) Princeton's Sam Wang puts Orman's "winGO probability at 85 percent," meaning "the probability of Democratic control of the Senate is about to pop up by 20-30 percent." Nathan Gonzalez, writing at the Rothenberg Political Report, dubs Roberts the "most vulnerable Republican Senator in the country." (Not that that means a whole lot, since the only other vulnerable Republican senator in the country is Mitch McConnell, and he's not all that vulnerable.)

Gonzalez goes on to explain how the Kansas Republican Party found itself in this unfortunate reality:

A spectacular confluence of events has built the credible scenario that a Republican could lose a U.S. Senate race in Kansas. Roberts is a long-time incumbent who doesn’t live in or regularly return to his home state. He faces a credible and well-funded independent candidate who is striking all the right tones in his message and doesn’t have a legislative record to be picked apart. And Republican Gov. Sam Brownback has fanned the flames of a long-time civil war in the state that is rallying some GOPers against establishment figures within their own party. [...]

Roberts is also vulnerable because he faces a very unique challenger. Businessman Greg Orman ran for the U.S. Senate as a Democrat in 2008 but dropped out during the primary and he has contributed to Democrats in the past, including Barack Obama. But Orman also doesn’t have an extensive legislative record to be picked apart. And he hasn’t been attacked for the last year, like McConnell’s challenger, Allison Lundergan Grimes.

Now that Orman is officially Roberts’ main challenger, Republicans will certainly do a deep dive into his record. And it may be a couple weeks before we find out whether there is a piece of opposition research that will doom Orman’s campaign.

For now, it looks like Orman is doing everything right. He’s running ads that cover nearly the entire state that strike a moderate tone. “I’m a businessman who solves problems every day,” he said in a recent spot, for example. And Orman unveiled endorsements from more than 70 former Republican lawmakers on Wednesday.

Gonzalez also points out that Roberts has a weak campaign infrastructure and reportedly hasn't been doing much campaigning at all since he (somewhat narrowly) defeated Milton Wolf in the Republican primary.

What's exciting about these developments is that we may actually get an interesting general election Senate race in 2014. So many of the relatively close races -- North Carolina, Georgia, Kentucky, Arkansas, Alaska -- pit a lame, scripted centrist Democratic robot fighting against some standard jerk Republican. Last night's North Carolina Senate debate between Thom Tillis and Sen. Kay Hagan, for example, was about the most hollow, lifeless viewing experience that's ever aired on C-SPAN, and C-SPAN is a network that regularly airs footage of an empty House of Representatives chamber with elevator music playing in the background. For so many of these races, the contours have been established, the scripts have been written, and it's going to be an uninspiring grind to the finish.

In Kansas, meanwhile, we've suddenly got moving parts. How will Greg Orman run, and how will Pat Roberts run against him? Orman won't want to jump whole-hog into Democratic arms, but he'll at least need to do something to appeal directly to the Democratic voters who'll now constitute much of his voting base. And while Orman doesn't have a voting record for Roberts to chew away at, he has run as a Democrat and donated to Barack Obama in the past. Those two things alone should be enough for Roberts and the national Republican Party to run the "Liberal Greg Orman will be a liberal Democrat rubber-stamp for his beloved liberal Barack Obama" playbook. On the other hand, if Republicans run that campaign and Orman still somehow wins, it would be much harder to convince Orman to caucus with Republicans in the Senate.

The race will hinge on how Orman chooses to define himself and how Roberts and the Republicans choose to define Orman. If it breaks down into an effective Democrat vs. Republican race, you'd think, just given the fact that this is Kansas in a strong Republican year with an unpopular Democratic president, that Roberts would be able to pull it off. But if Orman can manage to maintain the "independent" image and marry a coalition of Democrats and moderate Republicans, then he could pull off this most unlikely of upsets.

The fact that "moderate Republicans" are even available for the picking off this year is the amazing story at the root of all this. It's mostly the fault of Gov. Sam Brownback, who's horribly unpopular after enacting an extremely conservative economic agenda that the citizens of Kansas determined they didn't like. Brownback's in serious danger of losing his own reelection this year to a Democratic challenger. Tea Party Republicanism was enacted in the state, and the distaste for it among moderate Republicans could end up clubbing the party across the board.

Update: The GOP secretary of state in Kansas won't let Taylor off the ballot. So now we're in the strange situation where Republicans are trying as hard as possible to keep a Democrat's name on the ballot while Democrats could wage a legal fight to have their candidate removed. See? This is fun!